The miracle John Paul II has yet to accomplish 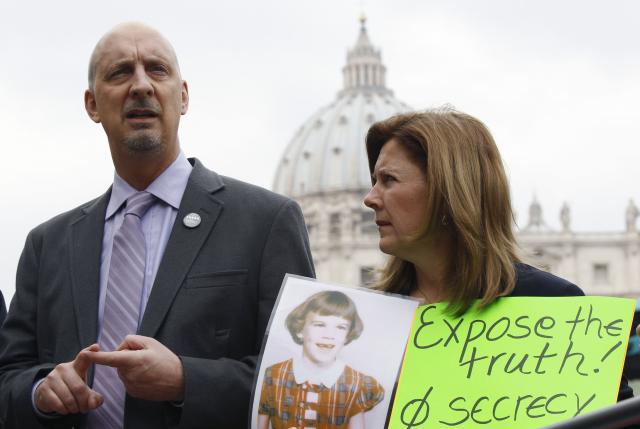 Peter Isely and Barbara Blaine, both of SNAP, in Rome in June 2010. (CNS/Reuters)

Official history, Camus once observed, is written by those who make history, not those who suffer from it.

Almost 20 years ago, A group of some 30 survivors of childhood sexual molestation by priests and I wrote to Pope John Paul II in painstakingly and excruciating detail of our harrowing experiences of being raped and sexually assaulted as youngsters while attending a boarding school for boys operated by the Capuchin Franciscan religious order in rural Wisconsin. The school, St. Lawrence Seminary, was one of a vast network of such Catholic seminaries across the United States. John Paul was keen to see a massive resurgence of places like St. Lawrence, in which priests raised children to become priests like themselves. Time magazine at the time dubbed our story "The Sins of Saint Lawrence." It's hard to imagine anymore when this kind of headline was novel, but it was. We delivered our letter, along with newspaper clippings, supporting legal documents, and videotaped depositions to the papal nuncio in Washington.

What we were hoping for from Pope John Paul II was justice.

What we received instead was a certified letter from the nuncio curtly informing us that our letters and documents had been acknowledged. We never heard anything more from either him or the pope. Since then, at least two of my seminary classmates, assaulted by the priest who molested me, have taken their lives waiting for papal justice. One shot himself on Christmas Eve 2002 in his parked car under a desolate freeway underpass.

It is likely John Paul, during his long tenure as pope, received hundreds, if not thousands of such letters. Not one survivor, in writing or in person, was ever known to have received a direct reply from him.

According to figures tabulated yearly by the American bishops, the number of priests who have sexually assaulted children over the past several decades, the vast majority committing their crimes while John Paul was pope, is just shy of a staggering 6,000 clerics. If the figure for the percentage of U.S. priests involved in the scandal is extrapolated worldwide, one can conservatively estimate that at least 30,000 Catholic clerics around the globe have sexually molested children.

This weekend with his beatification, the legacy of John Paul II will be, literally, sanctified by Pope Benedict as official church history. Part of that legacy, whose vast dimensions are still being uncovered, includes thousands of unprosecuted child molesting clerics, hundreds of thousands of child victims, and an institutional pattern and practice of concealing and transferring pedophile priests by dioceses and religious orders around the world.

We victims of priest abuse didn't need a papal saint. Papal sanctity did not stay the hands of the priest molester. To borrow the title of Julia Reinhard Lupin's recent work of political theology, if we needed a saint, we needed a new kind of saint, a Citizen-Saint, who embodied catholic citizenship as much as catholic sanctity, and who was as adept and insistent at forming such citizens among his seminarians, priests and especially his bishops.

It is as a fellow citizen, humbly assuming this most ordinary role, where John Paul's and the current Vatican's version of sanctity really fails. This failure is all the more dramatic with the late pope because he advocated so passionately as a "citizen of the world" for human rights around the world. That advocacy clearly and decisively ended at the front door of the church, school, and rectory. Fellow citizens report child molesting clerics to the police. Fellow citizens eject sex offenders from professional employment with children and families. The pope, who had the power to do both of these urgent citizen acts, never did the first, and made the second virtually impossible from within the thicket of church rules.

Citizenship, like holiness, requires sacrifice, defending if necessary, and dismantling if required, practices and traditions that attack the equality of rights regardless of one's ethnic, religious, or political affiliations or status (such as the basic human rights, say, of children inside the church). Concerning criminal priests, John Paul was never prepared, or saw no need for, the kind of sacrifice citizenship requires.

Aristotle, Luipin reminds us, wrote that "the good citizen need not of necessity possess the excellence which makes a good man." For this we can all be grateful. Our basic rights and protections, and the safety of our children from criminal harm, should not depend upon our neighbor's saintliness.

We might also add that the good citizen need not be an extraordinary man. And that might be the ultimate problem with John Paul's beatification. Catholic saints, after all, are saints because, according to the Vatican, they have affected extraordinary cures, suspending the very laws of nature and physics. To really honor someone in the Catholic church, being ordinary just won't do.

Yet it was justice, ordinary justice that victims like myself and my abused and anguished classmates desperately pleaded for in our letter to John Paul so many years ago.

[Peter Isely is on the national board of SNAP, the Survivors Network of those Abused by Priests, and graduate of Harvard Divinity School.]

Vatican | The miracle John Paul II has yet to accomplish

Four things to look for in Francis' reform of curia