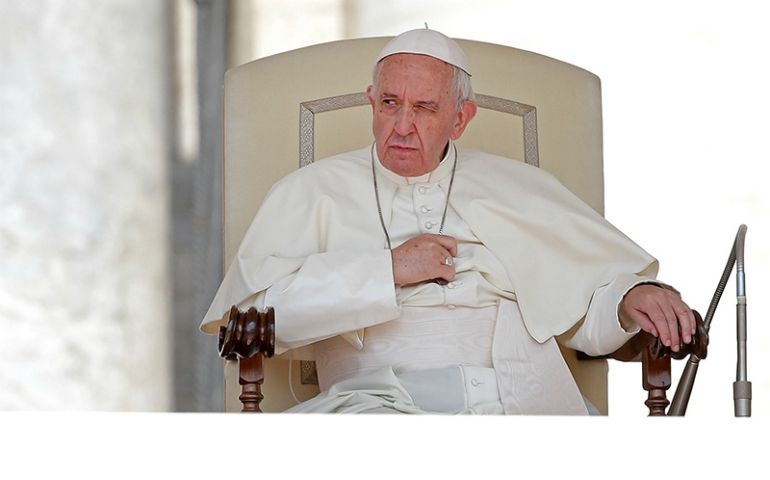 Pope Francis leads the Wednesday general audience in Saint Peter's square at the Vatican, on June 14, 2017. (Courtesy of Reuters/Max Rossi)

Vatican City — To the vast majority, Pope Francis is the compassionate face of Catholicism today.

But there is another streak to the Argentine pontiff that has been on display in recent days: A willingness to flex papal muscle and lay down the law.

Underneath the pope's compassion is a steely side, which he's particularly ready to use when it comes to priests, bishops or cardinals he feels are undermining the church's mission.

It was evident last week when the pope delivered a stinging rebuke to priests from the Diocese of Ahiara in Nigeria. The priests had refused to accept the 2012 appointment of a bishop from a different clan.

When he met with the Ahiara clergy he ordered each one of them to apologize in writing, pledge their "total obedience" to the papacy and accept whomever he appoints to lead the diocese.

To top it off, he told the priests they must send their letter within 30 days or face automatic suspension. As papal disciplining goes, it doesn't get much tougher.

The pope was furious clan differences were being put before the church’s unity and mission. If there is one thing Francis really dislikes, it's the church being used for political, sectarian or tribal agendas.

"It's a mistake to think of Francis as a 'nice guy,'" one of his aides said. The pope, he explained, is a "radical" with a mission.

The next day, Francis made another tough move. The Vatican announced that the pope had accepted the resignation of Archbishop Alfredo Zecca of Tucumán, Argentina, for health reasons.

The letter stated that the 68-year-old would not simply go into an early retirement but would remain as a "titular" archbishop, meaning that technically he still has to serve.

Was this some sort of punishment? Zecca has reportedly upset the pope for a failure to defend one of his priests, Fr. Juan Viroche, an outspoken voice against local drug traffickers.

In October, Viroche was found hanged, but Zecca resisted calls to put up a plaque in Viroche's parish commemorating the priest. Instead he accepted the official version of events that Viroche committed suicide. Many locals suspect the suicide was staged.

Driving both these moves is Francis' passionate aversion to hypocrisy. The pope has repeatedly denounced Christians who live a "double life," even arguing it is better to be an atheist than a "hypocritical Catholic" who condemns others but fails to practice what they preach.

Instead, the pope wants an inclusive church. He wants Catholic leaders to be peacemakers in their respective societies and be able to "bind up the wounds" of division. To see a bishop doing the opposite has made his blood boil.

Eighteen months ago during a visit to Africa, Francis made an appeal in Kenya against the "spirit of evil" that "takes us to a lack of unity." In unscripted remarks during a meeting with young people in Nairobi he then asked them to hold hands as "a sign against bad tribalism."

The pope also demonstrated his stern side by taking action against the Knights of Malta, an ancient Catholic chivalric order, after its then leader, Matthew Festing, was accused of improperly sacking a senior aide in a row ostensibly over the distribution of condoms by medical projects for the poor.

When the pope announced an investigation into the matter, the dispute mushroomed into a proxy war between Francis and those opposed to the direction of his papacy with Cardinal Raymond Burke — one of the pope's fiercest critics who had been appointed the Vatican liaison with the order — playing a key role in the saga. The pope won.

When it comes to rebukes, it's worth remembering Francis is a Jesuit, a member of a religious order founded by former soldier, St. Ignatius of Loyola, who incorporated military principles into its internal governance. One of these is obedience.

At the relatively young age of 36, Jorge Bergoglio led the Jesuits in Argentina, a period during which he later confessed to making mistakes due to an "authoritarian and quick manner of making decisions."

While a lot has changed since that time, part of him still performs the role of religious superior.

This week, a letter was leaked revealing the pope wants cardinals living in Rome to inform him when they are out of town, and where they are going.

Written by Cardinal Angelo Sodano, dean of the College of Cardinals, it asks that prelates revive this "noble tradition" of informing the papacy and the Vatican of their movements, particularly if they are gone for a long period.

Such a practice would be routine for any priest or religious living in a monastery, convent or seminary, but it shows the pope wants accountability from those who are his closest advisers. It is also tactically savvy, as it ensures the pope knows if a cardinal is about to deliver a major talk or address that might be critical of his papacy.

Francis has throughout his papacy sought to govern the church collegially, setting up an advisory body of cardinals that met in Rome for the 20th time this week.

They have been discussing how to delegate more power to local churches while the Vatican has also announced it wanted to hear the views of young people before a major church gathering for youth in 2018.

His defenders argue the pope needs to be tough to implement church reforms as he faces down internal opposition.

The irony, however, is that to bring about the more merciful, people-centered church he so passionately desires, Francis is having to exercise some firm authority in the process.