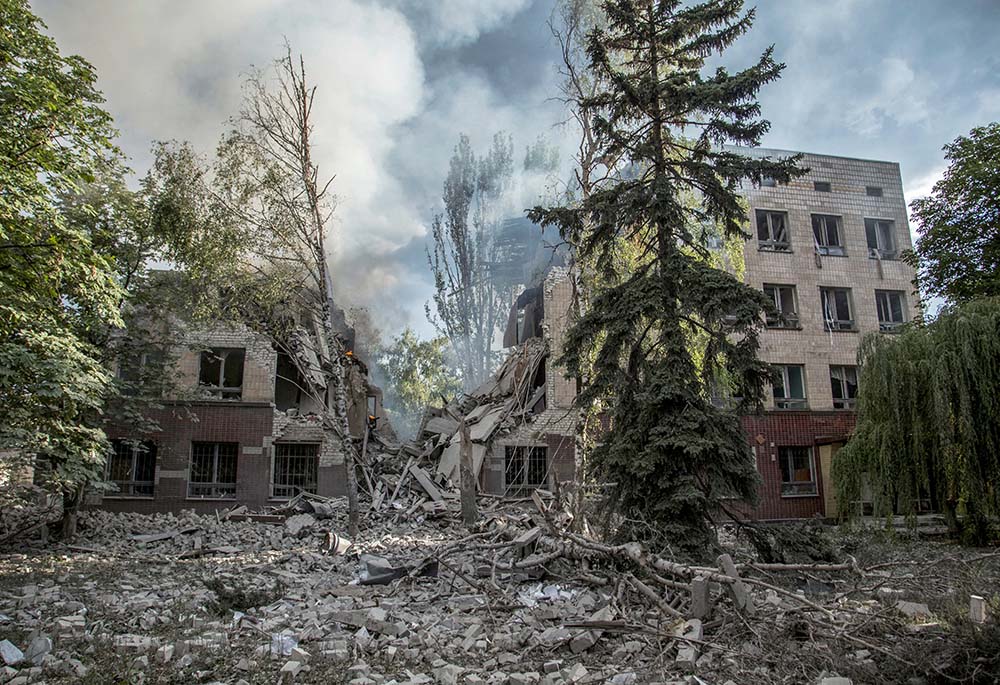 When representatives of the World Council of Churches debated the war in Ukraine in late June, few expected the historic ecumenical organization to bow to demands for Russia's Orthodox Church to be excluded over its support of President Vladimir Putin's bloody invasion.

Yet the deep acrimonies surrounding the ruinous conflict have raised questions about interfaith ties, as well as about the realistic chances of religious mediation.

"The Ukrainian and Russian governments have themselves kept the path to negotiation open - and there's an even greater case for maintaining dialogue and not closing the channels between churches," Pallottine Fr. Slawomir Pawlowski, an ecumenism expert at Poland's Catholic University of Lublin, told NCR.

"But there's also no doubt that talks and meetings can be exploited for propaganda, so attention must be paid to this as well," he said. 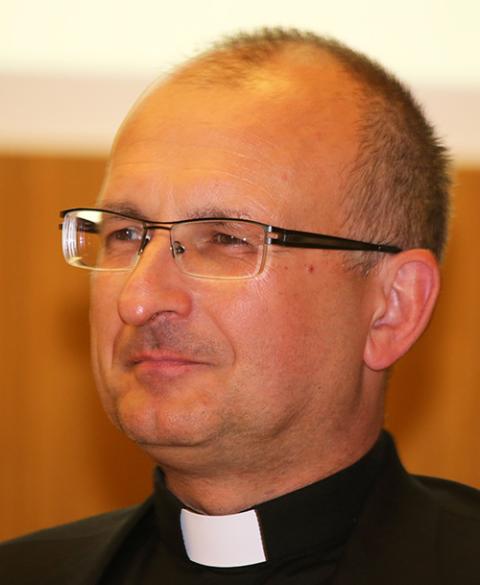 The World Council of Churches' central committee met in Geneva to set an agenda for the council's upcoming plenary assembly, which opens in Karlsruhe, Germany, Aug. 31 under the theme "Reconciliation and Unity."

There had been calls for the Russian Orthodox Church, usually a major World Council of Churches presence, to be barred because of the pro-war stance of its leader, Patriarch Kirill.

While condemning Russia's "illegal and unjustifiable war," however, the central committee declared itself open to Russian participation. The late summer plenary will now go ahead, with a 20-member Vatican observer group headed by Cardinal Kurt Koch, head of the Vatican's Dicastery for Promoting Christian Unity.

"War ... is incompatible with God's very nature and will for humanity and against our fundamental Christian and ecumenical principles," said the committee, which represents 580 million Christians in 352 separate member-churches. The committee said it "rejects any misuse of religious language and authority to justify armed aggression."

"We acknowledge and welcome the commitment of the Moscow Patriarchate ... to engage in encounter and dialogue on the situation in Ukraine under the auspices" of the World Council of Churches, the committee said, adding, "Dialogue remains an obvious urgent necessity to address such a critical situation."

Meanwhile, although Pope Francis pulled out of a planned June 14 meeting with Kirill in Jerusalem, the pope has said he still hopes to meet the Russian Orthodox leader when he visits Kazakhstan Sept. 14-15 for a world congress of religious leaders.

With the patriarch facing Western sanctions for backing the war, some observers wonder whether such top-level encounters can achieve anything, beyond fueling Moscow's ruthless disinformation machine. 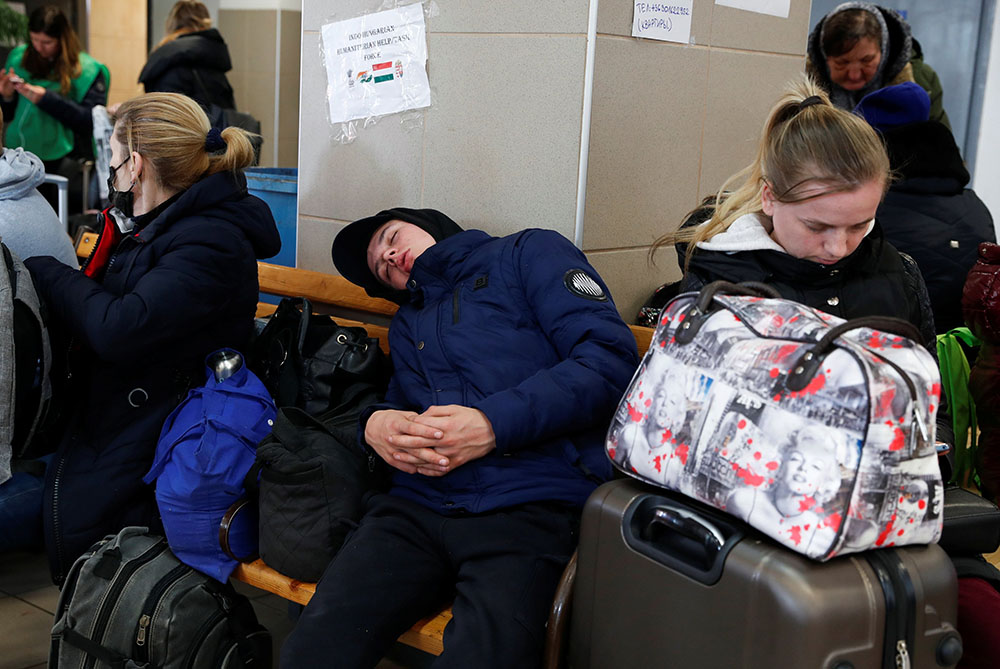 "But with everyone's energy and time now focused on Ukraine, it's become much harder to talk to people other than those you already know well," he said. "This has removed any great impetus for Catholic-Orthodox dialogue."

Doubts about dealing with Russian Orthodox leaders are understandable.

A day before the Feb. 24 Russian invasion, Kirill lauded Putin's "high and responsible service to the people," and assured his country's armed forces that they had "chosen a very correct path."

Four days later, as Ukrainian fighters struggled to hold back attacks on several fronts, he endorsed Putin's view that Ukraine had never been a genuine country, telling a Moscow congregation that Ukraine really formed part of "Russian land."

The patriarch's support for Putin's "special military operation" has continued.

Addressing Moscow audiences on Russia's May 9 Victory Day, Kirill indignantly dismissed claims he had made "militaristic speeches," while urging Russians to "ensure the Fatherland becomes strong and invincible." 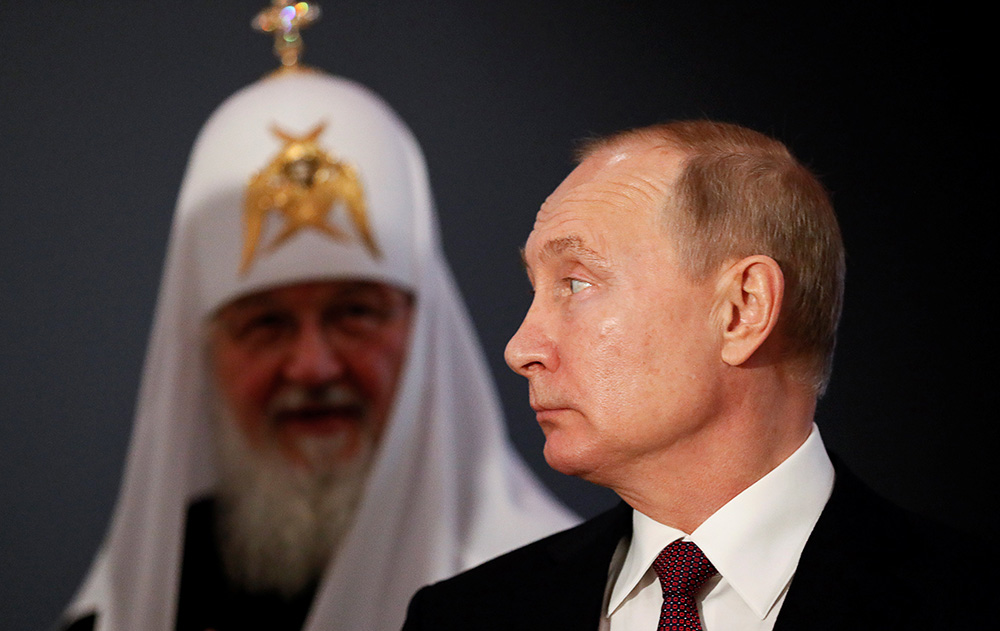 On June 19, he praised invading forces for "defending Russia on the battlefield," and attributed the courage and self-sacrifice of Russian troops "not to high pay, encouragement by superiors or a wish for advancement, but to an inner moral sense nurtured through the Orthodox faith."

Orthodox theologians across the world have condemned Kirill's espousal of the notion of a Russian sphere of influence, or "Russki Mir," branding it totalitarian and heretical.

Meanwhile, the patriarch's stance has also been rejected by hundreds of Orthodox priests in Russia, who have risked arrest for criticizing the invasion, as well as by Russian Orthodox dioceses abroad and the Moscow-linked Ukrainian Orthodox Church, whose governing Holy Synod reaffirmed its independence in a May 27 declaration.

Hundreds of parishes have switched allegiance since Russia's invasion to Ukraine's smaller independent Orthodox Church, formally established in January 2019, while many of the Ukrainian Orthodox Church's 54 dioceses no longer include Kirill in their prayers.

Despite this, the pope has continued attempts at dialogue, sending Cardinal Konrad Krajewski, the Polish-born head of his charity office, to Ukraine on three separate humanitarian missions. Francis has remained in contact with Moscow through Russia's Holy See embassy. 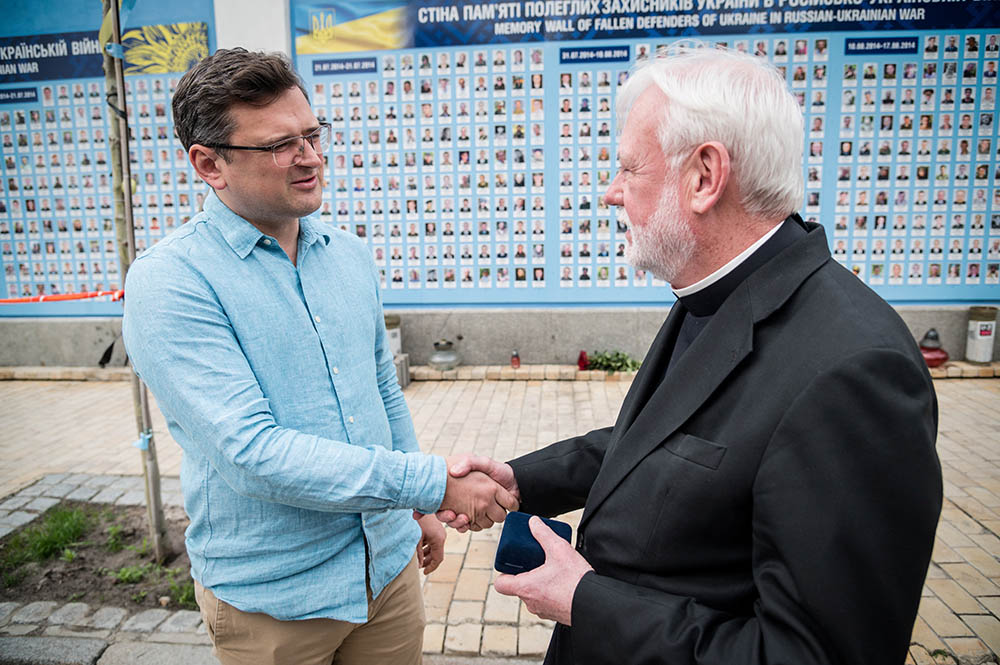 Visiting Kyiv and Lviv in Ukraine in late May, the Vatican's foreign minister, Archbishop Paul Gallagher, reiterated the pontiff's readiness to "aid a genuine negotiating process," if Russia and Ukraine agreed.

The pope's stance has shown signs of hardening.

In a Rome message for the church's World Day of the Poor, he said the conflict had been complicated by "direct intervention of a superpower, aimed at imposing its own will in violation of the principle of the self-determination," while "extortionate demands made by a few potentates" were "stifling the voice of a humanity that cries out for peace."

Yet attempts by Francis to appear evenhanded have also caused controversy.

In an early May interview with Italy's Corriere della Sera daily, he suggested NATO had contributed to the war by "barking at Russia's door" and questioned whether Western countries should be supplying Ukraine with weapons.

The comments were criticized by the foreign ministries of Ukraine and Poland, as well as by a prominent Italian theologian, Archbishop Bruno Forte, who compared Russia's invasion to Hitler's 1939 attack on Poland and warned against "naive pacifism."

Some church leaders, even in Ukraine, have been content to accept Rome's judgment.

"Since fighting broke out in eastern Ukraine back in 2014, Vatican diplomacy has greatly assisted us, while the pope himself has devoted great care to our problems," Bishop Jan Sobilo, an auxiliary with Ukraine's eastern Kharkiv-Zaporizhzhia Diocese, told NCR.

"The Holy Father must speak as pope for all nations — including Russia itself, where there are also many Catholics," said the bishop. "He must also build bridges, even in the harshest and most threatening situations."

Not everyone has concurred.

After touring Ukraine in late May, the president of Poland's bishops' conference criticized the Vatican's "naive and utopian" attitude to the war, and said he feared it was returning to its "old line" of the 1970s, focusing on ties with Moscow at the expense of Eastern and Central Europe.

"The Holy See is always neutral in its diplomatic activity and tries to be impartial toward warring parties — it knows Christians are often fighting on both sides, so it doesn't identify the aggressor," Poznan Archbishop Stanislaw Gadecki told Poland's Catholic Information Agency. 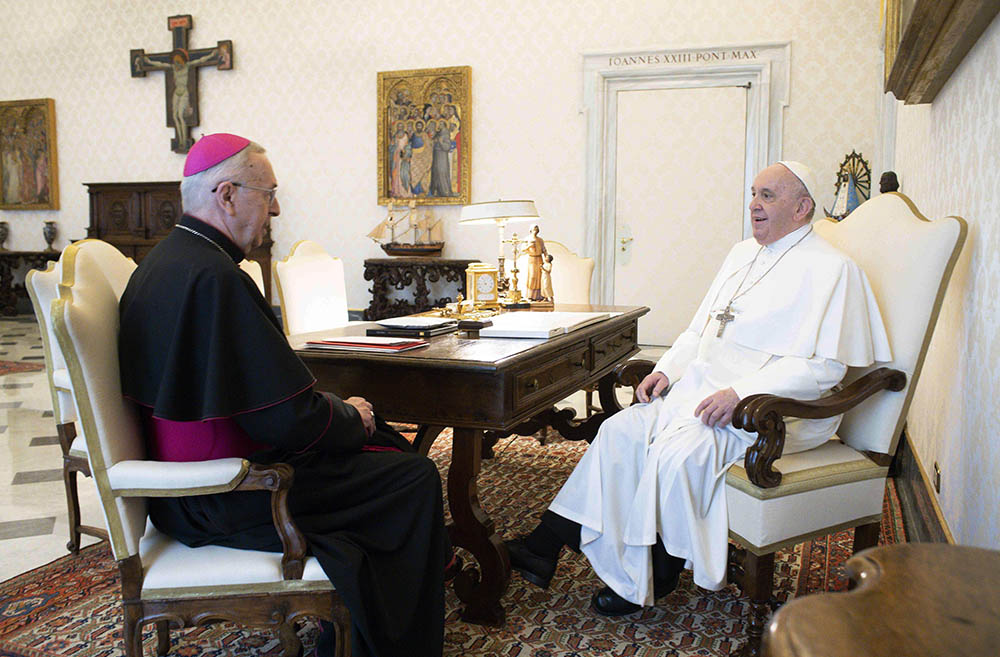 "Of course, contact and dialogue are worthy goals, since Russia is great and merits respect," said Gadecki, whose country has received more than 4.1 million Ukrainian refugees in four months. "But the Holy See should also be more careful, knowing from the experience of Central and Eastern European countries that lying is second-nature to Russian diplomacy."

In Russia itself, Lipke also admits to doubts — not least as to whether the pope should be seeking a meeting with Kirill.

While Russian leaders have traditionally preferred to deal directly with Rome rather than with their country's Catholic Church, Russia's Catholic minority is itself divided, with some priests and laypeople backing the "military operation" against Ukraine and others opposing it.

"Kirill has clearly dug himself in deeply — but Orthodox Christians here also hold contrasting opinions, depending on how the campaign is going," the Russian bishops' secretary-general told NCR.

"Although some bishops may think differently, I personally can't see any purpose in talking with the patriarch right now," said Lipke.

For now, at least, despite reservations, the contacts look set to continue. 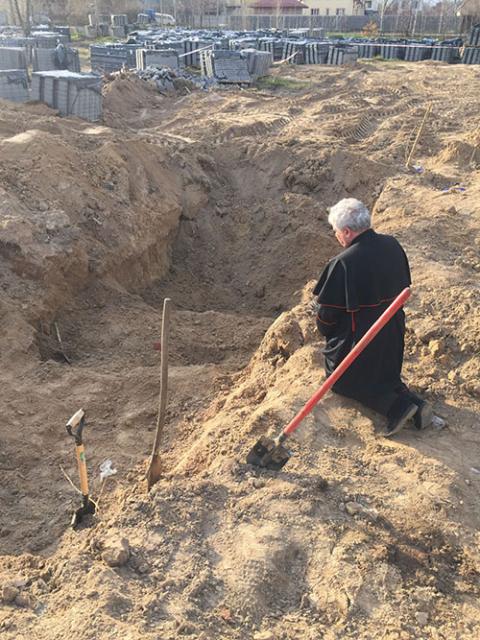 Cardinal Konrad Krajewski prays over a mass grave near Borodyanka, Ukraine, April 15, during a humanitarian visit as a papal envoy to the country. (CNS/Vatican Media)

The World Council of Churches is organizing a "pilgrimage of justice and peace" to Kyiv and Moscow, and has braved angry Russian reactions by inviting Ukraine's independent Orthodox Church to send observers to its late summer assembly.

The late June statement affirmed the World Council of Churches' role "as a platform and safe space for encounter and dialogue" and urged "members of the ecumenical fellowship in Russia and Ukraine to make use of this platform."

The final composition of the Russian church's large delegation, unveiled in March, was thrown into doubt by the sudden dismissal on June 7 of its projected leader, Metropolitan Hilarion Alfeyev, the long-serving director of the church's foreign relations department — a move widely believed linked to Hilarion's lack of enthusiasm for the Ukraine war.

But observers say the Russian church is already working hard to gain support among the 200 Orthodox delegates, who will make up a quarter of the World Council of Churches assembly's participants from more than 120 countries.

In the meantime, with half a million troops engaged along a 1,900-mile front, the world's largest military confrontation since World War II looks set to continue.

In a statement ahead of a June 15 meeting of NATO defense ministers, Kyiv government officials said their forces currently needed 2,500 tanks and armored vehicles, as well as 1,000 drones and 1,300 howitzers and MLRS rocket systems "to end the war."

The United Nations put the number of Ukrainians forced to flee their homes at 14 million, almost a third of the population.

"In such circumstances, I'd be extremely surprised if the Vatican came up with some diplomatic solution acceptable to the two sides," Lipke, the Russian Catholic bishops' secretary-general, told NCR.

"As with previous papal efforts to end wars, the possibilities to use high-level encounters for propaganda seems much greater now than any possibility that the pope could be accepted as a mediator," said the priest.