On papal flight, Francis says Colombia trip a push to 'go forward on path to peace'

by Joshua J. McElwee
Vatican
This article appears in the Francis in Colombia feature series. View the full series. 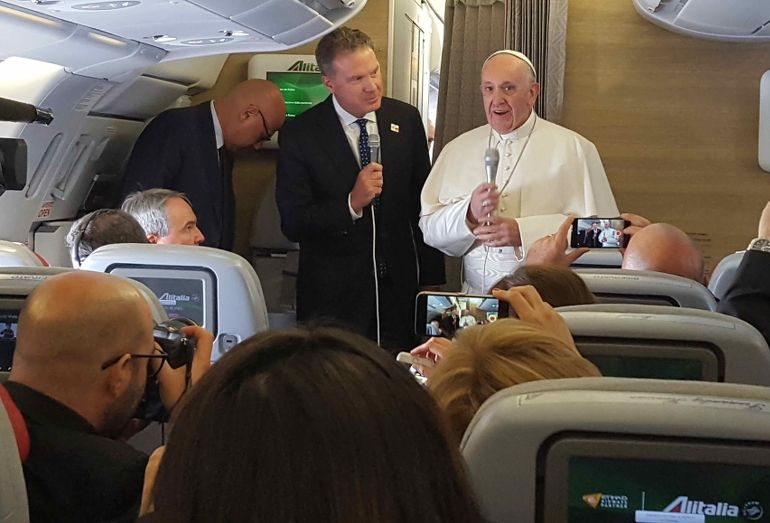 ABOARD THE PAPAL FLIGHT TO COLOMBIA — Pope Francis began his five-day visit to Colombia by calling the trip "a bit special," saying it is meant to help the country "go forward on its path to peace" following the recent ending of a bloody 50-year war between the nation’s government and rebel guerilla forces.

In short remarks to journalists Wednesday at the beginning of the 12-hour flight from Rome to Bogota, the pontiff also mentioned the continuing political crisis in neighboring Venezuela.

Noting that the papal plane will fly over that country on its way to Colombia, the pope said: "A prayer for Venezuela, so that ... the country will find a good stability, through dialogue with everyone." 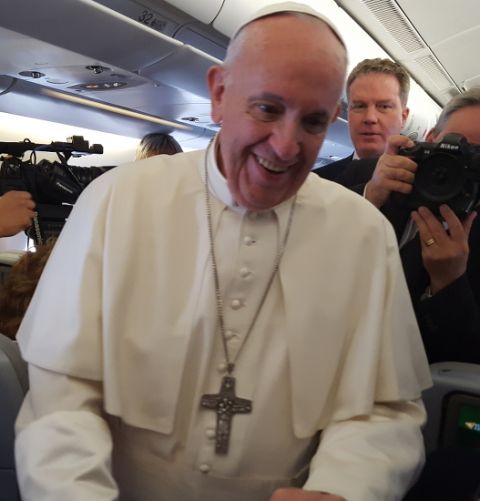 Francis is to visit Colombia Wednesday-Sunday. He will spend each night in the capital of Bogota but will travel each day to different cities across the country.

The papal visit comes nearly a year after the Colombian government and the rebel group FARC finalized a peace deal ending a brutal guerilla war that started in the 1960s. While the deal has come under criticism from some Colombians for allegedly treating the FARC too kindly, Francis is expected to give a strong push to the agreement.

Organizers have given the trip the theme "Let's take the first step" and the official image for the visit shows the pope walking forward in a symbol of the path ahead for peace.

Francis is to land in Bogota mid-afternoon Wednesday, where he is expected to be greeted by Colombian President Juan Santos. The pope has no public speeches planned for the rest of the day. He is to spend Thursday in the capital, meeting with the country's political authorities and bishops and celebrating an outdoor Mass at a park.

Related: Papal trip to Colombia will be balancing justice and mercy

The pope is to head Friday to Villavicencio, a city near the Colombian-Venezuelan border, where he will take part in a prayer gathering for national reconciliation. Thousands of Venezuelans are expected to cross the border for a chance to see the pope, who may take the occasion to speak about their country's continuing crisis.

Venezuelan President Nicolas Maduro, in power since the death of Hugo Chavez in 2013, has been accused of brutal authoritarian leadership. The country has been rocked by months of protests in which dozens have died.

Vatican officials said the path for Francis' flight Wednesday had to be adjusted due to Hurricane Irma, which is threatening much of the Caribbean with catastrophic levels of wind and rain.