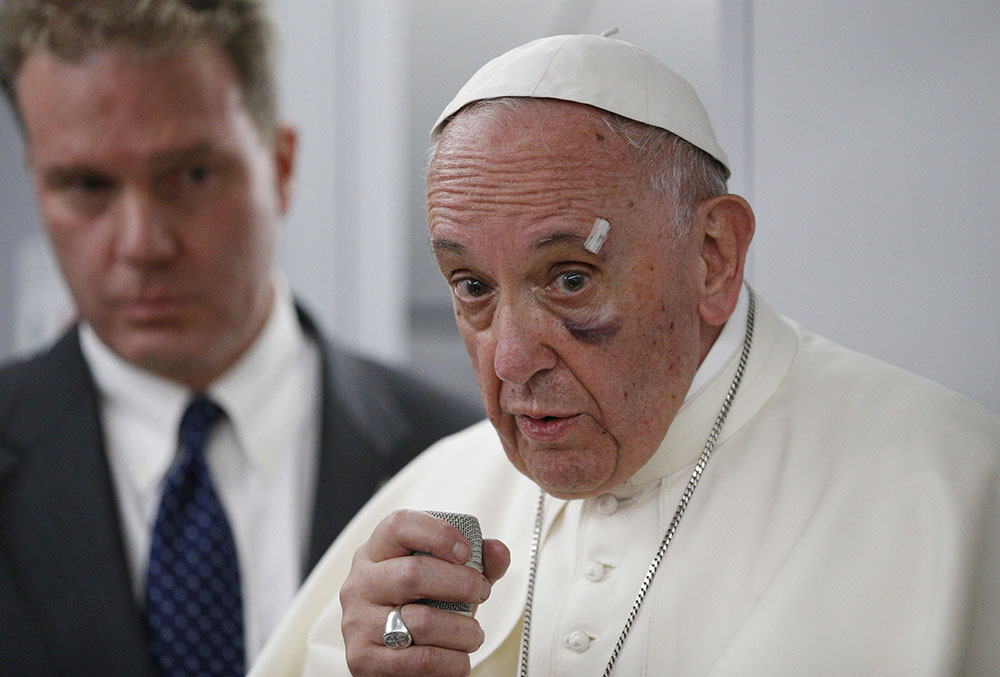 Pope Francis answers questions from journalists aboard his flight from Cartagena, Colombia, to Rome Sept. 10. Earlier, the pope cut and bruised his face on the popemobile window when he was greeting people. (CNS/Paul Haring)

In a half-hour press conference on the flight back to Rome Sept. 10 after a five-day visit to Colombia, the pontiff also said he hoped Trump would reconsider his decision to stop the Deferred Action for Childhood Arrivals program, also known as DACA.

"I have heard the President of the United States speak," the pope said, responding to a question from a Mexican journalist about Trump's decision. "He presents himself as a pro-life man. If he is a good pro-lifer, he should understand that the family is the cradle of life and you must defend its unity."

Francis said that while he has not studied the specifics of the DACA program, he believes "removing young people from their family is not a thing that bears good fruit, neither for the young person nor the family."

The pope said he is especially worried about young people who become detached from their roots and lose hope in the future, even then choosing to commit suicide. "Young people today need to re-find their roots," he said. "And anything that goes against this robs them of hope." 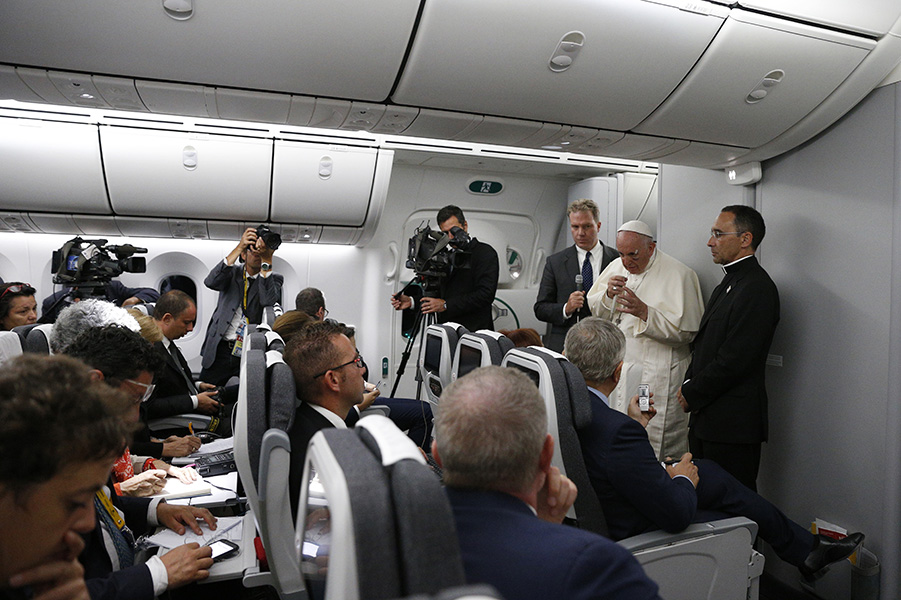 Former President Obama started the deferred action program in 2012 to protect some 800,000 young people brought to the U.S. illegally as children from deportation. Trump's attorney general, Jeff Sessions, announced Sept. 5 that the president would be ending the program in six months, placing those youth in danger of being deported.

While Trump was known to be pro-choice prior to entering politics, he promised on the 2016 campaign trail that he would be a pro-life president and received the support of numerous Christian pro-life groups and leaders, including former Vatican official U.S Cardinal Raymond Burke.

Francis previously questioned Trump's Christianity in a 2016 press conference, when asked about the then-presidential candidate's plan to build a wall across the entire U.S.-Mexico border. "A person who thinks only about building walls ... and not building bridges is not Christian," the pope said then.

Trump responded angrily to that statement, saying that it was "disgraceful" for a religious leader to question someone's faith.

Francis also said during the press conference that political leaders have a moral responsibility to follow scientists' recommendations and reduce carbon emissions in order to stem the effects of climate change.

The pope said that whoever denies that humans are contributing to the warming of the planet "needs to go visit the scientists and ask them."

"You see the effects of climate change, and the scientists say clearly the path to follow," said the pontiff, mentioning current reports that the ice at the North Pole is breaking up due to increased global temperatures. "All of us have a ... moral responsibility."

Francis said he had recently read a news report that claimed humanity has three years to make changes to stop the warming of the planet without making the process irreversible.

"I do not know if three years is right or not, but if we do not turn back, it is true that we will go down," said the pope. "We have to take this seriously. I believe it is not something to joke around with."

The pontiff said all people must confront the situation. "Political leaders have their responsibility, [but] everyone has their own," he said.

The pope spoke about climate change in response to a question about what responsibility leaders who do not act to mitigate its effects have for the damage and deaths that may be caused by catastrophic weather events attributed to the continued warming of the planet.

The papal flight from Colombia passed near the Caribbean islands, where days ago the record-setting Hurricane Irma had left a trail of destruction before continuing on to put much of the western coast of Florida underwater overnight Sept. 10.

Francis published an encyclical letter in 2015, Laudato Si', that embraced the scientific consensus on climate change and called for humanity to combat global warming.

The pope told journalists before release of the document that he hoped it might influence the then-ongoing discussions that led to the Paris climate accord, an agreement made among 195 of the world's nations to reduce greenhouse emissions.

Trump announced in June that he would remove the U.S. from the agreement, making it one of a small handful of countries outside the pact.

Asked why he thought political leaders have taken so long to confront climate change, Francis said the question made him think of a blunt phrase he recalled from the Old Testament: "The human is stupid."

Francis said he had been moved during his four city visit to Colombia Sept. 6-10 by the desire of people in the country to have peace following an agreement last year that ended a bloody 50-year war between the government and rebel guerilla forces.

"It is a spontaneous desire, and within that is the force of the people," said the pope. "I have hope in this. The people want to breathe. We have to help them -- help them with closeness, with prayer, but most of all the comprehension of how much pain there is within so many people."

Francis visited the Colombian cities of Bogotá, Villavicencio, Medellín, and Cartagena before returning to Rome. In his speeches in the country he primarily focused on the need for the country's people to pursue reconciliation following a conflict that killed an estimated 220,000 and displaced some 5.7 million.

"I was moved by the joy, the tenderness, the youthfulness, the nobility of the Colombian people," the pontiff said of the trip. "I am grateful for the witness of joy, of hope, of patience in the suffering of this people."

Francis also said he felt fine despite suffering an injury on his last day in Colombia. While traveling on the streets of Cartagena in the popemobile Sept. 10, the pope banged his head on the inside of the vehicle as it slowed down suddenly to avoid crowds along his route. He was left with a black eye and a cut on his left eyebrow.

Describing the accident, the pope said: "I was leaning over to greet children, I didn't see the glass, and boom!" 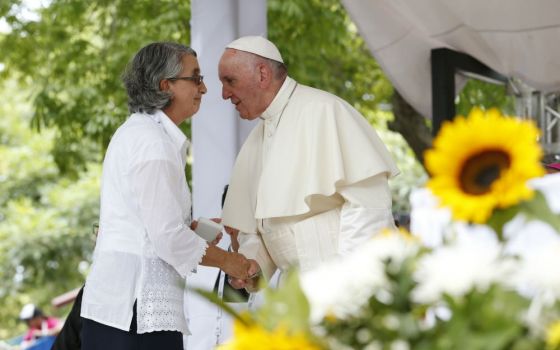 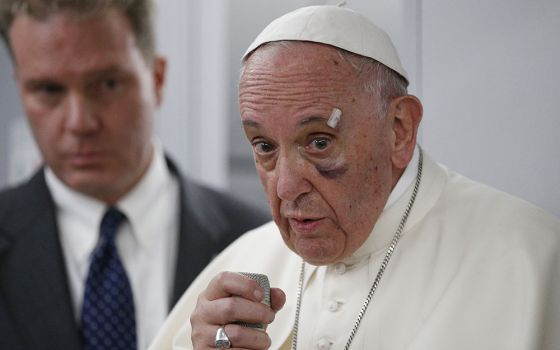 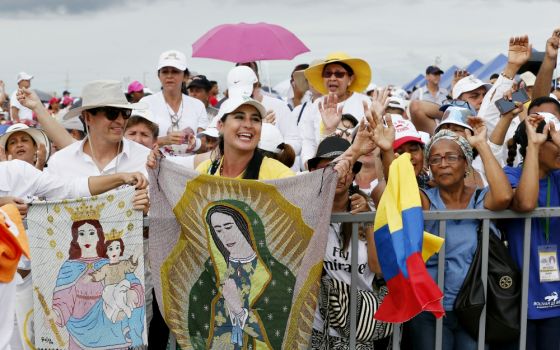 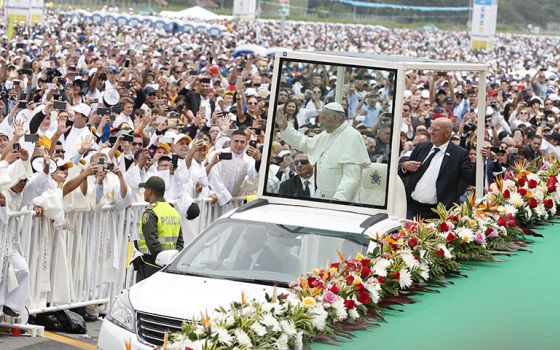