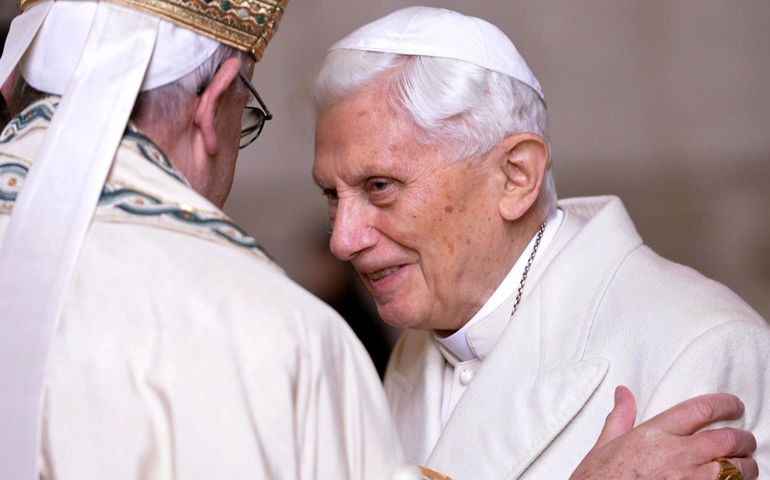 Rome — Retired Pope Benedict XVI has said the work of governing the global Catholic church was not his "strong point" and that he had a weakness of "little resolve" before the difficult decisions he faced.

But in his first substantial comments since his renunciation of the papacy in 2013, to be published in a new book-length interview Friday, the retired pope also says that while there were difficult moments in his reign it was "also a period in which many people found a new life in the faith."

"A weak point of mine was maybe little resolve in governing and making decisions," admits the ex-pontiff in the book, titled Ultime Conversazioni ("Last Conversations"), and excerpted Thursday in Italy's Corriere della Sera newspaper.

"In reality I am more a professor, one who reflects and mediates on spiritual questions," Benedict states. "Practical governance is not my strong point and this is certainly a weakness."

"But I do not see myself as a failure," he continues. "For eight years I carried out my work."

The new book is based on conversations Benedict had at some point after his retirement with German journalist Peter Seewald, with whom he also published a book-length interview during his papacy. The English language edition of the volume is to carry the title Last Testament: In His Own Words and be published Nov. 3.

In the excerpts released Thursday, Benedict widely praises his successor Pope Francis, calling him "the man of practical reform."

"He was an archbishop for a long time, he knows the trade," the retired pope says of Francis. "He was a superior of Jesuits and has the ability to put his hands to action in an organized way. I knew that this was not my strong point."

Speaking to his 2005-13 reign as pontiff, Benedict admits there were "difficult moments," citing specifically three scandals that occurred during his papacy: Continued questioning of the church's handling of sexual abuse; his decision to lift the excommunication of traditionalist Bishop Richard Williamson, who denies aspects of the Holocaust; and the so-called Vatileaks trial at which his butler was found guilty of publishing secret documents.

Setting aside the scandals, he states, "it was also a period in which many people found a new life in the faith and there was also a great positive movement."

Benedict also says he was surprised by the March 2013 election of Argentine Cardinal Jorge Bergoglio, who took the name Francis, and initially he was unsure of the choice.

"No one expected him," says the retired pope. "I knew him, naturally, but I did not think of him. In this sense it was a big surprise. I did not think that he was in the select group of candidates."

"When I heard his name, initially I was insecure," he states.

"But when I saw him speak on one hand with God, and on the other with people, I was truly content and happy," he continues, in an apparent reference to the memorable moment when Francis was introduced to crowds in St. Peter's Square and bowed his head towards them and asked that they pray to God to bless him in his ministry.

Benedict also reveals that Francis tried to call him before heading out on the balcony but that the new pope's call went unanswered because the retired pope and his party "were right in front of the television."

The retired pontiff bluntly rebuts those who have claimed he resigned the papacy due to threats of blackmail or some other malfeasance.

"It is also not true that I was embittered," he continues. "In fact, thanks to God, I was in a peaceful state of soul, of one who has overcome the difficulty -- the state of soul in which you can tranquilly pass the helm to who comes next."

The retired pontiff says he himself wrote the famous declaration announcing his resignation, which he read aloud in Latin on Feb. 11, 2013 to a meeting of cardinals and bishops at the Vatican.

"I wrote the text of the resignation," says Benedict. "I cannot say with precision when, but at the most two weeks before."

"I wrote it in Latin because something so important you do in Latin," he continues. "Furthermore, Latin is a language in which I know well how to write in a more appropriate way. I would have written it also in Italian, naturally, but there was the danger that I might make an error."

In a theme he often touched in his papacy, Benedict also uses the book to criticize what he calls the "de-Christianization" of Europe.

"It is evident that the Church is always abandoning more the old traditional structures of European life and therefore is changing its appearance and living new forms in itself," he states in the excerpts. "It's clear most of all that the de-Christianization of Europe is progressing, that the Christian element is always vanishing more from the fabric of society."

"By consequence, the church must find a new form of presence, must change its way of presenting itself," says the retired pope. "Epochal upheavals are underway."

Vatican | Pope Benedict speaks: 'I do not see myself as a failure'

Pope: 'There is no justification' for 'sacrilegious' war on Ukraine