Pope: Blood of Ukrainian massacre victims 'cries out to heaven' 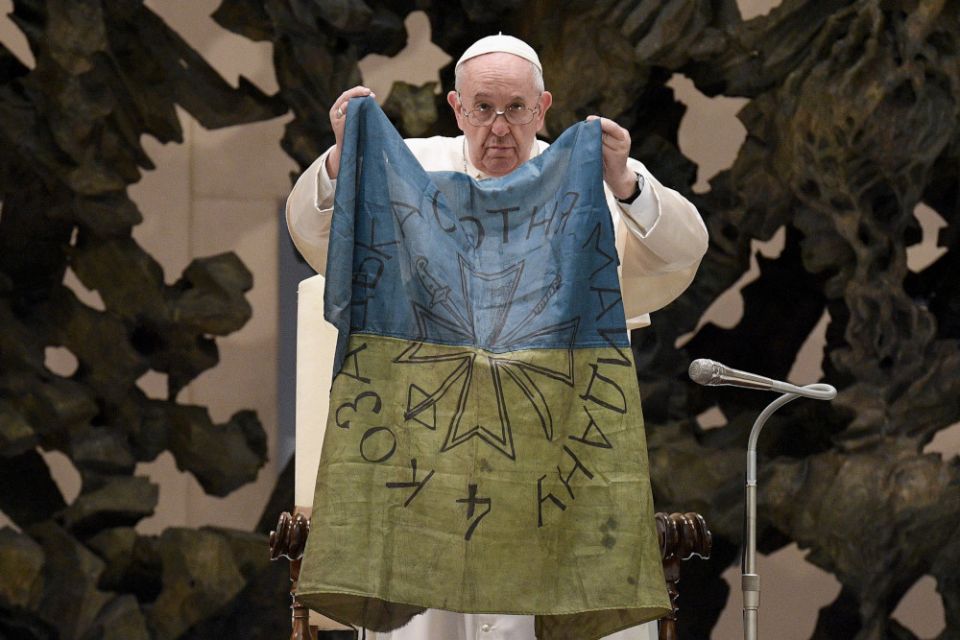 Pope Francis holds a Ukrainian national flag from Bucha during his general audience in the Paul VI hall at the Vatican April 6, 2022. (CNS photo/Vatican Media)

Vatican City — Pope Francis once again pleaded for an end to the bloodshed and violence in Ukraine after images of innocent civilians apparently executed in Bucha sparked outrage and horror around the world.

"The recent news of the war in Ukraine, instead of bringing relief and hope, attest to new atrocities, such as the massacre of Bucha," the pope said April 6 before concluding his weekly general audience.

The world is witnessing "ever-more horrendous acts of cruelty done against civilians, unarmed women and children, whose innocent blood cries out to heaven and implores, 'End this war. Silence the weapons. Stop sowing death and destruction,'" he said.

Videos and photographs released April 3, after Russian troops retreated from Bucha and other towns, showed dead bodies in the streets and in the yards of homes. Many appeared to have been shot in the head, execution style, and the hands of many of the corpses were bound.

Although Russia dismissed the accusations of war crimes as "fake news," evidence of mass executions sparked outrage, prompting several countries to expel Russian diplomats from their lands and leading to renewed calls for tougher actions against Russia.

After leading pilgrims in a silent prayer for the country, Francis held up a Ukrainian flag that was sent to him "from that tormented city of Bucha."

The pope then invited to the stage several Ukrainian children who recently arrived in Italy and asked the crowd to "greet them and pray together with them."

The children, accompanied by two women, went up to the pope. One young boy held a hand-made poster of the Ukrainian flag, with a smaller Italian flag in the center and outlines of small hands.

The pilgrims present at the audience hall applauded loudly as the pope welcomed the children, with one shouting, "Slava Ukraini" ("Glory to Ukraine")."

Gently rolling up the Ukrainian flag, the pope reverently kissed it before handing out chocolate Easter eggs to the children, prompting one of the women, holding a baby in her arms, to wipe away tears from her eyes.