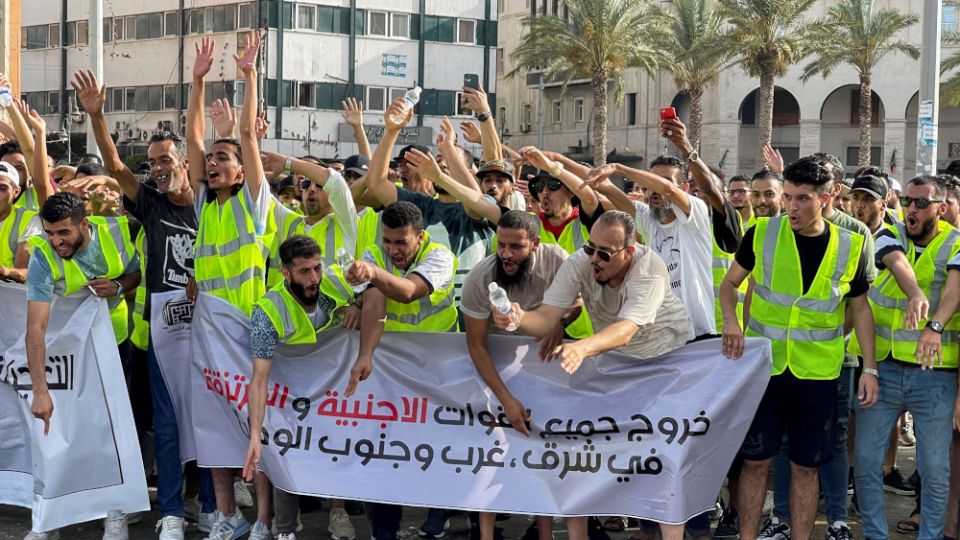 People hold a banner that reads "The exit of all foreign forces in the east and west of the country" during a protest against a power outage inside Martyrs' Square, in Tripoli, Libya, July 1, 2022. (CNS photo/Hazem Ahmed, Reuters)

Vatican City — Pope Francis called on authorities in Sri Lanka to listen to the cries of their people after months of civil unrest culminated with protesters storming the residences of the country's president and prime minister.

"I unite myself to the sorrow of the people of Sri Lanka who continue to suffer the effects of political and economic instability," the pope said July 10 after praying the Angelus prayer with pilgrims gathered in St. Peter's Square.

"Together with the bishops of the country, I renew my appeal for peace and I implore those who have authority not to ignore the cry of the poor and the necessities of the people," he said.

Sri Lanka has been in a state of emergency since April after nationwide protests erupted against Sri Lankan President Gotabaya Rajapaksa.

Protesters blamed Rajapaksa and his brother, former Prime Minister Mahinda Rajapaksa, for the country's financial woes which worsened with the COVID-19 pandemic. Facing backlash from protesters, the former prime minister resigned in May.

According to the Reuters news agency, mounting debt and tax breaks given by President Rajapaksa, as well as depleted foreign exchange reserves due to rising oil prices, further drove the country's finances into ruin.

Demonstrations reached a fever pitch when thousands of protesters stormed the residences of the president and Prime Minister Ranil Wickremesinghe July 9.

Mahinda Yapa Abeywardena, the speaker of Sri Lanka's parliament, announced shortly after that both the president and the prime minister are expected to resign from their posts July 13, Reuters reported.

In Libya, protests against the financial crisis and a continuing political deadlock, led demonstrators to storm the country's parliament July 3.

Libya has been in a turmoil since the ouster of Libyan dictator Moammar Gadhafi in 2011.

The pope also addressed "a special thought to the people of Libya in particular to the young people and to all those who are suffering because of the serious social and economic problems in the country."

"I urge everyone to seek ever-new, convincing solutions with the help of the international community, through constructive dialogue and national reconciliation," he said.

Lastly, Francis renewed his calls for peace in Ukraine which have continued to fend off attacks from Russia since the invasion began in late February. The pope said he was close to the country's people who are "tormented daily by brutal attacks."

"I pray for all the families, especially for the victims, the wounded, those who are sick. I pray for the elderly and for the children. May God show the way to put an end to this senseless war," the pope said.

The Friedman bull in the Middle East china shop