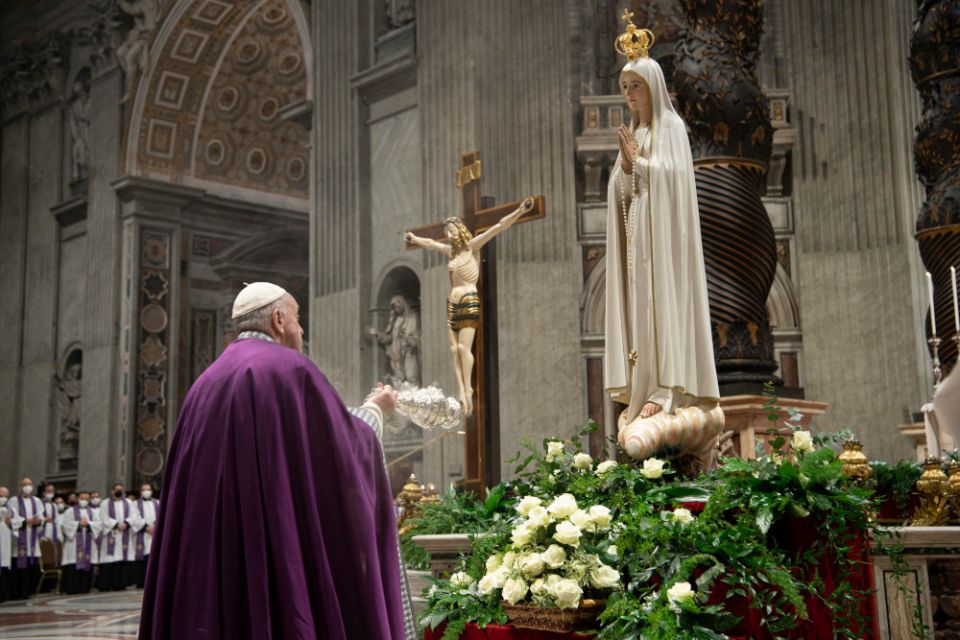 Pope Francis burns incense in front of a Marian statue after consecrating the world and, in particular, Ukraine and Russia to the Immaculate Heart of Mary during a Lenten penance service in St. Peter's Basilica at the Vatican March 25, 2022. (CNS/Vatican Media)

Vatican City — As Russia's violent monthlong invasion continued to devastate Ukraine, Pope Francis laid the fates of both countries at the feet of Mary in the hopes that peace would finally reign.

"Mother of God and our mother, to your Immaculate Heart we solemnly entrust and consecrate ourselves, the church and all humanity, especially Russia and Ukraine," the pope said March 25, pronouncing the Act of Consecration after leading a Lenten penance service in St. Peter's Basilica.

Praying before a statue of Mary that was loaned by the Shrine of Our Lady of Fatima at San Vittoriano on the outskirts of Rome, the pope pleaded with Mary to "accept this act that we carry out with confidence and love. Grant that war may end, and peace spread throughout the world."

Sitting in front of the statue, which was placed before the steps of the main altar on a red platform and adorned with white roses, the pope proclaimed the act of consecration. During the prayer, the pope paused at several moments to gaze at the statue of Mary before continuing to recite the prayer.

"To you we consecrate the future of the whole human family, the needs and expectations of every people, the anxieties and hopes of the world," he prayed.

After the consecration, the pope, accompanied by a young boy and girl, placed a bouquet of white roses at the feet of the statue. He then remained for a few moments, with eyes closed and head bowed in silent prayer, before stepping away.

Among those present at the liturgy were Andrii Yurash, Ukraine's ambassador to the Holy See. The consecration, he tweeted March 25, is "another attempt (by the pope) to defend Ukraine from the devil's war," referring to Russia's attacks on the country.

Joe Donnelly, who soon will present his credentials to the pope as the U.S. ambassador to the Holy See, also attended the service.

The Vatican announced March 18 that Pope Francis also asked bishops around the world to join him in consecrating Ukraine and Russia to the Immaculate Heart of Mary.

Cardinal Konrad Krajewski, the papal almoner, led a similar act of consecration at the Shrine of Our Lady of Fatima in Portugal.

Bishops from around the world had announced special services to coincide with the timing of the consecration in Rome, even in the early hours of the morning.

At the Dulce Nombre de Maria Cathedral-Basilica in Hagatña, Guam, Archbishop Michael Byrnes led the faithful in praying the rosary before reciting the Act of Consecration at 2 a.m. local time March 26.

Archbishop Georg Gänswein, private secretary of retired Pope Benedict XVI, had told reporters that the former pope would join in the consecration from his residence.

In a video released before the liturgy, Archbishop Sviatoslav Shevchuk of Kyiv-Halych, major archbishop of the Ukrainian Catholic Church, said he would join in the consecration "because today we need very much the victory of good."

The consecration, Archbishop Shevchuk said, "means that it is never possible to make a deal, to cooperate with this evil that emerges from Russia today."

"And that is why we must pray for its conversion, for the eradication of that evil, 'so that it,' as the Mother of God of Fatima said, 'might not destroy other states, might not cause yet another world war.' We, as Christians, have a duty to pray for our enemies," he said. 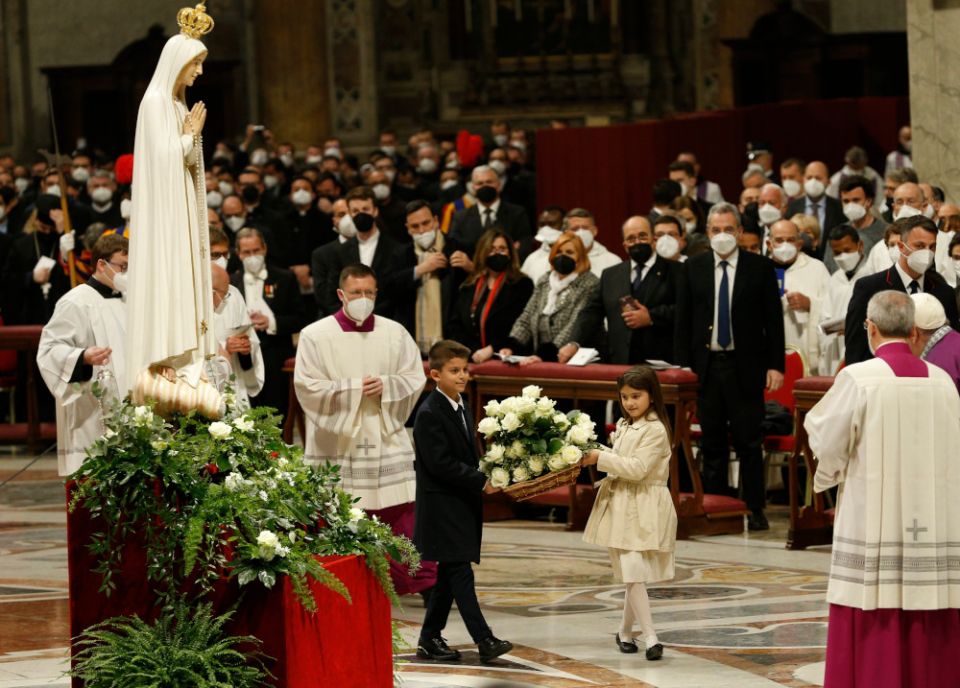 Children carry flowers to place at a Marian statue after Pope Francis consecrated the world and, in particular, Ukraine and Russia to the Immaculate Heart of Mary during a Lenten penance service in St. Peter's Basilica at the Vatican March 25, 2022. (CNS/Paul Haring)

In Rome, the bells of St. Peter's Basilica rang out after Pope Francis concluded the Act of Consecration.

In his homily during the Lenten penance service, the pope acknowledged that the war in Ukraine, which "has overtaken so many people and caused suffering to all, has made each of us fearful and anxious."

While calls to "not be afraid" may soothe one's helplessness in the face of war, violence and uncertainty, the pope said that "human reassurance is not enough."

"We need the closeness of God and the certainty of his forgiveness, and once renewed by it, Christians can also turn to Mary and present their needs and the needs of the world," he said.

Pope Francis said the Act of Consecration was "no magic formula but a spiritual act" of trust by "children who, amid the tribulation of this cruel and senseless war that threatens our world, turn to their mother, reposing all their fears and pain in her heart and abandoning themselves to her."

"It means placing in that pure and undefiled heart, where God is mirrored, the inestimable goods of fraternity and peace, all that we have and are, so that she, the mother whom the Lord has given us, may protect us and watch over us," the pope said.

In his prayer, Pope Francis specifically asked Mary to be with those suffering directly because of the war.

"May your maternal touch soothe those who suffer and flee from the rain of bombs," he prayed to Mary. "May your motherly embrace comfort those forced to leave their homes and their native land. May your sorrowful heart move us to compassion and inspire us to open our doors and to care for our brothers and sisters who are injured and cast aside."