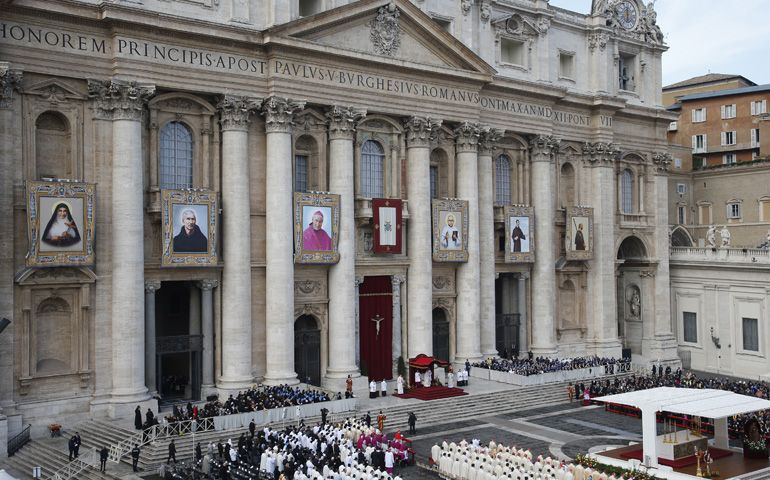 The banners of six Italian and Indian saints hang from the facade of St. Peter's Basilica as Pope Francis celebrates their canonization Mass on Sunday in St. Peter's Square at the Vatican. (CNS/Paul Haring)

Vatican City — Using a newly simplified rite, Pope Francis proclaimed six new saints and praised them for the love and self-giving with which they served God and built up his kingdom by serving the poor and needy.

Creating the two Indian and four Italian saints Sunday, the feast of Christ the King, the pope said, "They responded with extraordinary creativity to the commandment of love of God and neighbor," dedicating themselves, "without holding back, to serving the least and assisting the destitute, sick, elderly and pilgrims."

The Mass in a St. Peter's Square still damp from an early morning rain began with the canonizations using an even briefer formula than what had become standard with St. John Paul II. The formula had been expanded by now-retired Pope Benedict XVI in 2012.

The new rite did away with the three "petitions" used by Pope Benedict; the cardinal prefect of the Congregation for Saints' Causes would ask the pope three times to canonize candidates and the pope would respond by asking God to "sustain with his grace" the act of canonization and not allow the church to err in such an important matter. In response to the third petition, the pope would recite the formula for canonization.

Instead, on Saturday, Cardinal Angelo Amato, congregation prefect, requested Pope Francis canonize the six candidates and the pope responded by introducing a litany of the saints, praying that through their intercession God would "sustain with his grace the act which we now solemnly undertake."

In his homily at the Mass, Pope Francis focused on the feast of Christ the King and the description in the day's first reading (Ezekiel 34:11-12, 15-17) of how God shepherds his people.

"These verses," the pope said, "are interwoven with verbs which show the care and love that the shepherd has for his flock: to search, to look over, to gather the dispersed, to lead into pasture, to bring to rest, to seek the lost sheep, to lead back the confused, to bandage the wounded, to heal the sick, to take care of, to pasture."

The Old Testament description is "fulfilled in Jesus Christ," he said, and those who minister in Christ's name -- the pope, the bishops and priests -- must follow his example "if do not want to become hirelings. In this regard the People of God have an unerring sense for recognizing good shepherds and in distinguishing them from hirelings."

Thousands of Catholics from India, especially from Kerala, traveled to the Vatican to celebrate St. Chavara and St. Eluvathingal. Meeting the pilgrims briefly Monday, Pope Francis said the two Indians "remind each of us that God's love is the source and the goal and the support of all holiness, while love of neighbor is the clearest demonstration of love for the Lord."