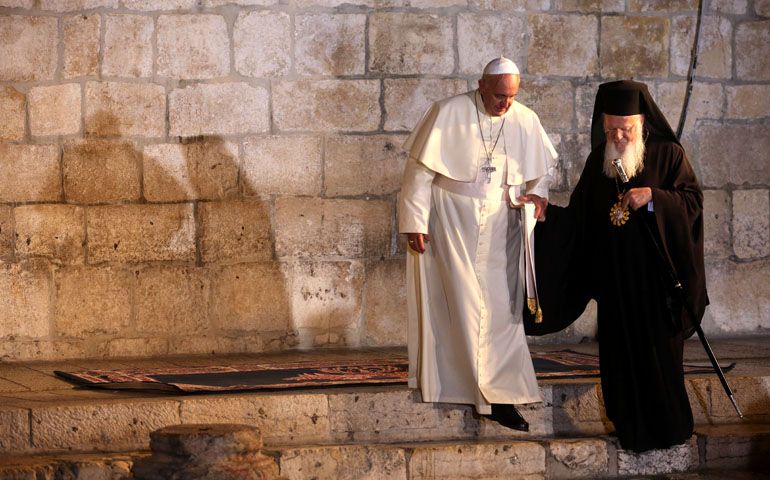 Pope Francis walks with Ecumenical Patriarch Bartholomew of Constantinople on May 25 at Jerusalem's Church of the Holy Sepulcher. (CNS/EPA/Abir Sultan)

Vatican City — When Ecumenical Patriarch Bartholomew joined Pope Francis at the Vatican to pray for peace in the Holy Land, it was the latest demonstration of a remarkable relationship the two leaders have forged in a very short time.

It is believed to be the first time in the history of the Catholic church that such a momentous encounter among Catholic, Jewish, Muslim and Orthodox leaders has taken place behind the walls of the Vatican.

But apart from its political significance, this overture will also provoke more speculation about whether the Catholic and Orthodox churches may one day be reunited after nearly 1,000 years of estrangement.

"The pope invited the Ecumenical Patriarch; they have a great rapport," the Vatican's chief spokesman, Jesuit Fr. Federico Lombardi, told Religion News Service on June 6. "There is a great cordiality between them and a desire to open up dialogue."

Francis issued the invitation to Peres and Abbas last month during his official three-day visit to Jerusalem, Jordan and the Palestinian territories. It was not only his first pilgrimage to the Holy Land, but an opportunity for the pontiff and Bartholomew to walk in the footsteps of Pope Paul VI and Patriarch Athenagoras, who also made history when they met there 50 years ago.

Francis and Bartholomew met several times during the trip and kindled reports that they want to hold a high-level "ecumenical synod" in 2025 to mark the 1700th anniversary of the Council of Nicea that produced the Nicene Creed. Different Orthodox and Catholic versions of the creed are one of the stumbling blocks toward unity between the two churches.

Lombardi, however, said the 2025 meeting is not a "fait accompli" and cautioned that it is "very early to jump to conclusions."

The 74-year-old patriarch from Turkey and the 77-year-old Argentine pontiff come from opposite sides of the globe, but the two have established a strong personal connection based on mutual respect and a humble and yet determined approach to confronting global issues like peace and climate change.

They are said to communicate easily in Italian and share a genuine desire to work for the reunification of their respective churches, which have been split since 1054.

"I think there's something unique here," said Anthony Limberakis, national commander of the Order of Saint Andrew, an Orthodox organization that promotes the patriarchate in the U.S.

"The Ecumenical Patriarch was the first to travel to Rome for the installation of a pope, and that marked the beginning of a relationship of mutual respect."

Limberakis, who lives in Philadelphia, was a member of Bartholomew's delegation to the Middle East in May and is convinced the churches are "journeying towards unity."

"The fact that these two leaders have come together for reconciliation is an example for others," he told RNS. "They have reaffirmed their willingness to continue their dialogue and to try and accomplish full communion between the churches."

The Rev. John Chryssavgis, a priest in the Greek Orthodox Archdiocese of America and a theological adviser to Bartholomew, said the patriarch's presence in Rome goes far beyond a willingness to unify their respective churches.

"It underlines the serious and sincere commitment to the unity that the two 'sister churches' seek," he said. "It also recognizes the need -- regardless of confessional differences -- for a united witness to a broken world, where social injustice abounds, where the ecological crisis has reached alarming heights, and where power and religion are abused."

Fr. Pierbattista Pizzaballa, the Vatican's custodian of Catholic sites in the Holy Land and one of the organizers of the June 8 event, played down expectations of any kind of political breakthrough ahead of the meeting.

"We have no presumptions that this event will bring peace. This is a pause in respect to politics," Pizzaballa told reporters. "The pope does not want to get into the political questions of the Israeli-Palestinian conflict."

"This is also an invitation to politicians to pause and look heavenward. Everyone wants something to happen, something to change. Everyone is tired of these eternal negotiations that never end."