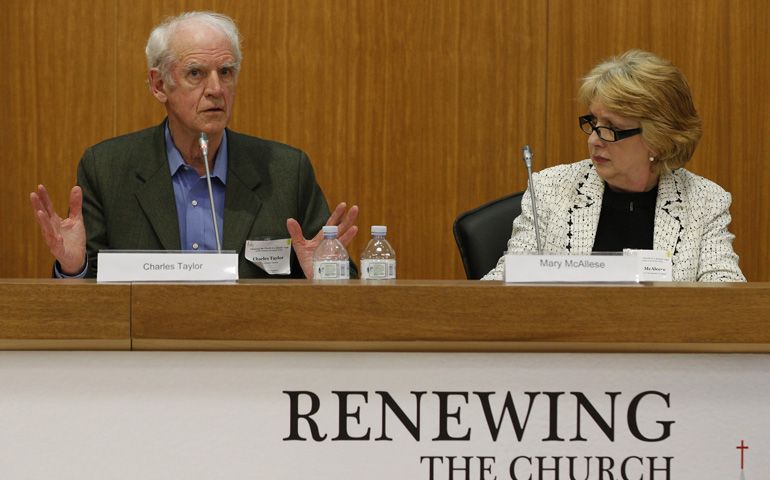 Charles Taylor, professor emeritus of philosophy at McGill University in Canada, and Mary McAleese, president of Ireland from 1997 to 2011, at "Renewing the Church in a Secular Age" on Thursday at the Pontifical Gregorian University in Rome. (CNS/Paul Haring)

Rome — As the second anniversary of Pope Francis' election approached, an international group of philosophers, sociologists and theologians gathered to discuss how to renew the church in a secular age; many said that is exactly what Pope Francis is doing.

"I think the church had gotten into the stance of defending itself against its critics and trying to convince them, but that's not a stance of dialogue. Pope Francis is going out and reaching out," said Charles Taylor, professor emeritus of philosophy at Canada's McGill University.

Taylor was one of the main speakers at an international conference, "Renewing the Church in a Secular Age," Wednesday and Thursday at Rome's Pontifical Gregorian University. The Pontifical Council for Culture, which supported the conference, has tapped Taylor for several events in 2015 aimed at examining how the church engages in dialogue with nonbelievers, seekers and skeptics.

While criticizing the ideology of secularism, which with varying degrees of hostility seeks to remove religion from the public sphere, Taylor sees secularization as a fact generated by a complex series of cultural, social, political and economic events. In a secular age, he says, the church must find new ways to reach people and new ways to promote harmony within its communities.

Rather than whining about how "we in the church have been misunderstood and people don't like us and why don't they like us," Taylor said, Pope Francis is living the Gospel and reaching out.

Msgr. Tomas Halik, a Czech professor of sociology and winner of the 2014 Templeton Prize, told reporters before the conference that Pope Benedict XVI took the first step. The retired pope invited nonbelievers engaged in scholarly debate about ethics and truth to his 2011 interreligious gathering for peace in Assisi. He also supported the Pontifical Council for Culture's "Courtyard of the Gentiles" project, which promotes dialogue between believers and nonbelievers.

Pope Francis, Halik said, is taking things a step further by reaching beyond the academic community, insisting that Jesus is knocking at the door of Catholic churches asking to be let out into the world. It is a call to all Catholics to reach out to those seeking meaning, truth, beauty and justice. At the same time, however, it is also an invitation to be willing to learn more about God from the seekers' questions and experience.

"We cannot be just arrogant owners of the truth," he said. "We must be seekers for the seekers, with the seekers."

Much of the conversation at the Gregorian University event focused on Taylor's idea that with regards to faith, there are "seekers" and "dwellers." The seekers -- baptized Christians or not -- continue to question. The dwellers have found a home in a church and may have a tendency to nest there so thoroughly that they seldom reach out to others and only accept those who believe exactly as they do.

"God is present in the seekers and in the seeking," Halik said, and so in addition to its two traditional tasks of providing pastoral care to Catholics and missionary outreach to those who have not heard of Christ, the church needs to add a third task: "accompanying seekers."

The church needs to adopt a model that emphasizes "the welcoming church, the open church, the church able to communicate with spiritual seekers," Halik told Catholic News Service.

Taylor agrees. "I am a teacher," he told reporters. "I see immense numbers of young people looking for meaning" and convinced that someone can help them become better people and build a better world.

However, with young people and the church, he said, you see "great hunger on one side" and "great treasures on the other side," but there is an increasing inability to bring the two sides together. "There's something deeply perverse or stupid or wrong about that," he said.

The church needs to talk to the seekers, listen to their concerns and figure out how to connect with them, he said.

Jose Casanova, a professor of the sociology of religion at Georgetown University in Washington, said the international group of philosophers, theologians and sociologists present at the Rome conference started the "Faith in the Secular Age" project "with a sense of concern, a sense that the disjunctions (including between seekers and dwellers) were growing larger and there were no real avenues to address them within the church or between the church and outside the church."

"We were concerned by what could be called a self-referential church that had been too concerned about what could be called a 'moral confessionalism' in which being Catholic was defined by certain moral criteria more than criteria of dogma or belief in doctrine," he said. Positions on "moral issues having to do with gender and sex" seemed to be how Catholics themselves and the outside world were defining who was and was not Catholic.

The election of Pope Francis has created new opportunities to discuss ways to overcome the splits and heal the rifts, he said.

"The big, big issue," Taylor said, is how to "accompany the seekers without shocking the dwellers." The first thing, he said, is to ensure that as Catholics are reaching out to nonbelievers, to seekers and to members of other faiths, they are reaching out with the same amount of energy, understanding and compassion to other Catholics with whom they do not agree.

"We are all part of the same sacramental communion and we have to behave like it," he said.

[Robert Duncan in Rome contributed to this story.]