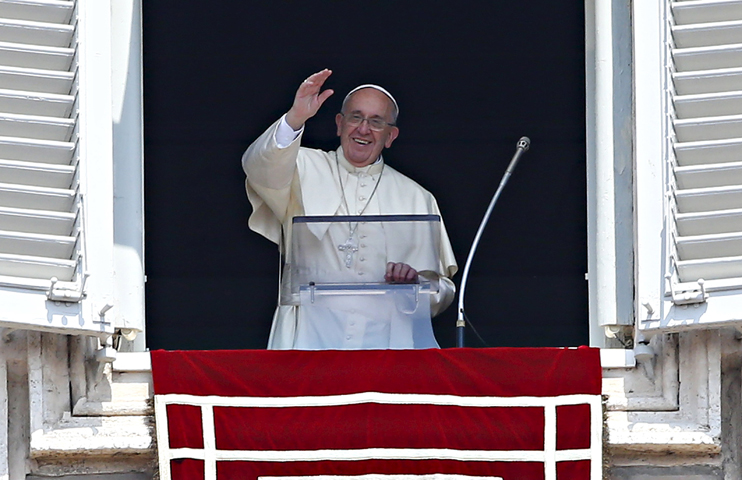 Pope Francis waves as he leads the Angelus from the window of his studio overlooking St. Peter's Square at the Vatican Aug. 9. (CNS photo/Tony Gentile, Reuters)

Marking the 70th anniversary of the atomic bombings of Hiroshima and Nagasaki, Pope Francis repeated the Catholic church's call for a ban on nuclear weapons and all weapons of mass destruction.

Seventy years after the Aug. 6, 1945, bombing of Hiroshima and the bombing of Nagasaki three days later, "this tragic event still gives rise to horror and revulsion," the pope said Aug. 9 after reciting the Angelus with visitors gathered in St. Peter's Square.

The atomic bombings of the two Japanese cities by the United States during World War II, he said, have become a symbol of "the vast destructive power of human beings when they make distorted use of scientific and technical progress."

At the same time, he said, the destruction unleashed is a lasting call to humanity to reject war and "ban nuclear weapons and all weapons of mass destruction."

"Most of all, the sad anniversary is a call to pray and work for peace, to spread throughout the world an ethic of brotherhood and a climate of serene coexistence among peoples," Pope Francis said.

"From every land," he prayed, "let one voice rise: no to war, no to violence, yes to dialogue, yes to peace!"

"The only way to win a war is not to make war," the pope said.

Francis also told the crowds gathered in St. Peter's Square that he was following with deep concern the news coming out of El Salvador, where suffering is increasing because of growing violence, economic difficulties and "acute social contrasts."

"I encourage the dear Salvadoran people to persevere, united in hope, and I exhort all to pray that in the land of Blessed Oscar Romero justice and peace will bloom again," he said.

In his main Angelus address, Pope Francis spoke about the day's Gospel reading from St. John, which includes Jesus telling the people, "No one can come to me unless the Father who sent me draw him."

Jesus, the pope said, is teaching the people that faith is a relationship between "the human person -- each of us -- and Jesus," a relationship in which the Father and the Holy Spirit each have essential roles.

While reading the Bible is important, he said, reading the Scriptures or even witnessing a miracle is not enough to bring someone to faith. Many people met Jesus during his lifetime -- and some even wanted to make him king -- but in the end, they turned on him and handed him over to the authorities.

Francis said that does not mean that God did not give them the gift of faith, but rather it means "their hearts were closed to the action of the spirit of God. And if you have a closed heart, faith cannot enter."

The pope prayed that people would learn to leave their hearts open, like Mary did, to the gift of faith, "a gift that is not private -- a gift that's not private property -- but a gift to be shared. It is a gift for the life of the world."