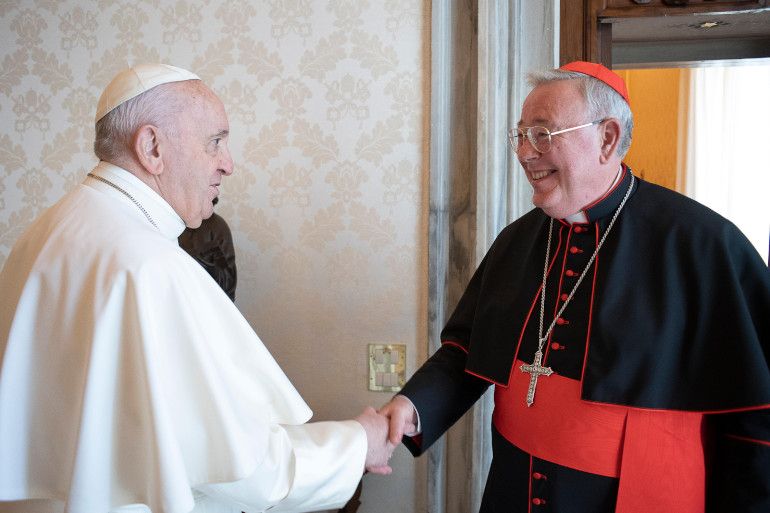 Pope Francis greets Cardinal Jean-Claude Hollerich of Luxembourg, president of the Commission of the Bishops' Conferences of the European Union, during an audience at the Vatican June 11, 2021. (CNS photo/Vatican Media)

Vatican City — Pope Francis has chosen Cardinal Jean-Claude Hollerich of Luxembourg, a Jesuit, to serve as relator general of the Synod of Bishops on synodality.

The appointment of Cardinal Hollerich, who also serves as president of the Commission of Bishops' Conferences of the European Union, was announced by the Vatican July 8.

The relator is responsible for providing a comprehensive outline of the synod's theme at the beginning of the meeting and for summarizing the speeches of synod members before work begins on concrete proposals for the pope.

The theme chosen by the pope for the next synod is: "For a synodal church: communion, participation and mission."

Cardinal Mario Grech, secretary-general of the Synod of Bishops, told Vatican News in May that, although originally scheduled for 2022, the synod will take place in October 2023 to allow for broader consultation at the diocesan, national and regional level.

The pope will formally open the synod process at the Vatican Oct. 9-10 this year, the synod office said. And the bishop of every diocese will open the process in his diocese Oct. 17.

The diocesan phase will go through April 2022, featuring a consultation with local Catholics discussing a preparatory document and questionnaire that the synod office will send out along with guidelines for how the consultation should work.

Shortly after the Vatican announced his appointment, Cardinal Hollerich posted a brief message on his Twitter account expressing his gratitude to Pope Francis.

"Thank you, Holy Father," the cardinal tweeted in Italian.

Pope heads to Balkans in May to visit Bulgaria, Macedonia