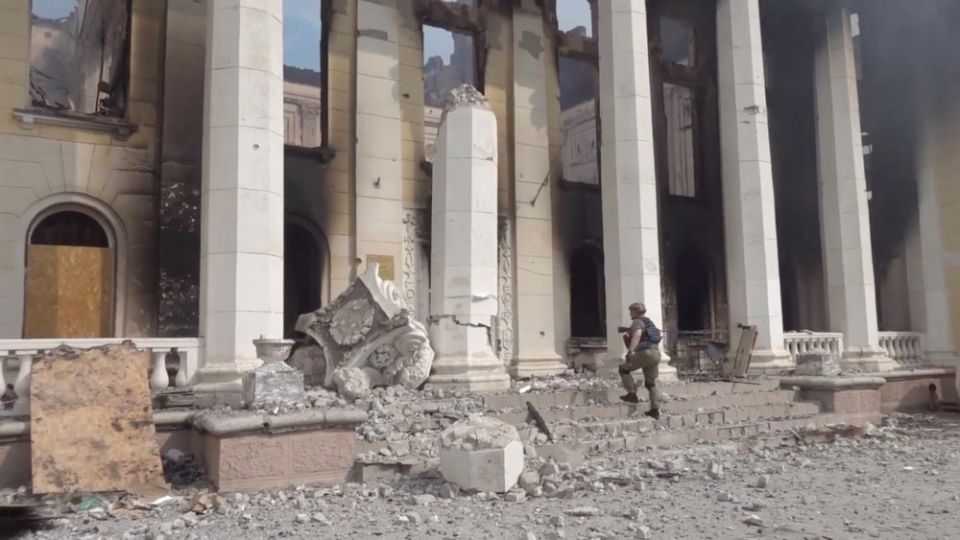 A police officer walks near a destroyed youth center after shelling by Russian troops in Lysychansk, Ukraine, June 5, 2022. (CNS photo/National Police of Ukraine handout via Reuters)

Vatican City — Pope Francis appealed to world leaders to start "real negotiations" to end to the war on Ukraine and avoid bringing the world to ruin.

"Let there be real negotiations, concrete talks for a cease-fire and a sustainable solution," he said June 5, after praying the "Regina Coeli" with visitors gathered in St. Peter's Square. June 3 marked 100 days since Russia launched its invasion of Ukraine.

"I renew my appeal to the leaders of nations: Please do not bring humanity to ruin!" he said.

"Let the desperate cries of the suffering people be heard -- we see it every day in the media -- have respect for human life and stop the gruesome destruction of towns and villages in eastern Ukraine," the pope urged leaders.

Celebrating Pentecost, the pope highlighted how the descent of the Holy Spirit represents God's dream for humanity becoming a reality, that is, enabling people who speak different languages to "encounter and understand each other."

"But now, 100 days after the armed aggression against Ukraine began, the nightmare of war, which is the negation of God's dream, has descended once again on humanity: peoples clashing, killing each other, people who, instead of coming closer, are driven from their homes," he said.

While "the fury of destruction and death rages on and confrontations flare up," he said, there is a continual "escalation that is increasingly dangerous for all."

"Let us, please, continue to pray and tirelessly strive for peace," he added.

The pope also expressed "satisfaction that the truce in Yemen has been renewed for another two months."

"I hope that this sign of hope can be one more step toward putting an end to that bloody conflict, which has generated one of the worst humanitarian crises in our time," he said, calling on people to not forget the children of Yemen who face "starvation, destruction, lack of education, lack of everything. Let us think of the children!"

The pope also asked for prayers for all those affected by the rising cost of fuel.

He expressed his closeness to the world's fishermen, who "are in danger of having to cease their activities" because of rising fuel costs, and "I extend it to all categories of workers severely affected by the consequences of the conflict in Ukraine."

Pope's quotes: He knows who we are