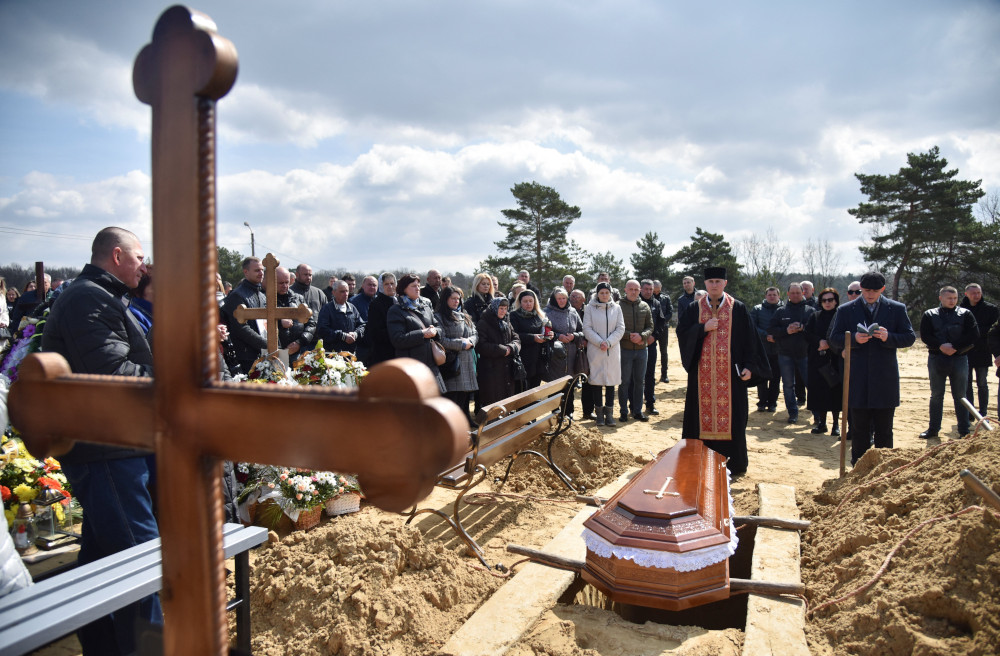 A priest prays during a funeral for Yuri Kushnir, who died when a Russian rocket hit a tire fitting shop, in Novoyavorivsk, Ukraine, April 20, 2022. (CNS photo/Pavlo Palamarchuk, Reuters)

Pope Francis and the Vatican are urging world leaders to listen to the people's cry for peace, and they have backed an appeal by the head of the United Nations for an Easter truce in Ukraine.

Francis first called for an Easter truce during his Angelus address at the Vatican April 10.

"Let the weapons be put down," he said on Palm Sunday. "Let the Easter truce begin. But not to provide more weapons and pick up the combat again -- no! -- a truce that will lead to peace, through real negotiation that is even disposed to some sacrifice for the good of the people. In fact, what victory is there in planting a flag on a pile of rubble?"

U.N. Secretary-General António Guterres echoed the appeal of the pope and other European Catholic and Protestant leaders for an Easter cease-fire.

Speaking to reporters April 20 at the U.N. headquarters in New York, Guterres asked there be a four-day "humanitarian pause" from April 21 to April 24, which is Holy Week and Easter on the Julian calendar, used by most Christians in Ukraine and Russia.

The cease-fire would allow for a series of humanitarian corridors to open, done in coordination with the International Committee of the Red Cross. It would offer safe passage of civilians wanting to leave and the safe delivery of aid to people in the hardest-hit areas such as Mariupol, Kherson, Donetsk and Luhansk, he said.

"The United Nations is ready to send humanitarian aid convoys during this period to these locations," he said. "We are submitting detailed plans to the parties."

In a written communique April 21, the Vatican said, "The Holy See and the Holy Father join with the appeal by António Guterres," and in agreement with Archbishop Sviatoslav Shevchuk of Kyiv-Halych, major archbishop of the Ukrainian Catholic Church.

"Aware that nothing is impossible for God, they call on the Lord asking that the population trapped in war zones be evacuated and peace be restored quickly," the Vatican communique said.

The pope and the Holy See also ask world leaders "to listen to the people's cry for peace."