Pope's Holy Land pilgrimage a huge roll of the dice 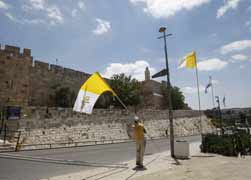 A worker raises the Vatican flag May 6 outside the Jaffa Gate in the Old City of Jerusalem in preparation for the visit of the pope. (CNS /Baz Ratner, Reuters)

Benedict XVI's first book as pope was a meditation on the Gospels titled Jesus of Nazareth, and last year he convened a synod of bishops entirely devoted to the Bible. For this pope in particular, the places, people and events of the Holy Land are deeply ingrained in both his spirituality and his intellectual interests, making his May 8-15 trip to Jordan, Israel and the Palestinian Territories, which opens tomorrow, a long-awaited pilgrimage -- probably the last chance for the 82-year-old pontiff to walk in the footsteps of Christ.

The trip is also, however, a huge roll of the dice.

While most papal activity is highly choreographed and often quite predictable, this is one of those rare ventures where almost anything could happen. The trip could be a smoldering disaster or a stunning triumph. Or, it could be far less dramatic -- little more, perhaps, than a series of polite photo-ops and mushy diplomatic language. It all depends on how things shake out.

First, the case for disaster. Four years into his pontificate, Benedict XVI has shown the world a host of impressive qualities: theological brilliance, deep faith, humility and graciousness, and a teacher's aptitude for clarity and synthesis. Even his most ardent admirers, however, concede that international diplomacy and public relations haven't always been part of his skills set. Among other things, Benedict XVI has had a bumpy relationship with both Muslims and Jews, even if at bottom he understands himself as a friend of both faiths.

Add that profile to the perennial combustibility of the Middle East, and it doesn't require a tremendous leap of imagination to conjure up any number of ways in which this trip could go off the rails. Part of the unpredictability is that a great deal isn't under the pope's control; as Fr. Pierbattista Pizzaballa, the Franciscan Custodian of the Holy Land, put it, "The pope will be in a glass house of sorts, with the hidden danger of being exploited."

As proof of the point, consider John Paul's celebrated 2000 visit to the Holy Land. Today that journey is recalled as one of the iconic events of the late 20th century, largely because of the indelible image of a frail and elderly pope standing at Jerusalem's Western Wall to atone for Christian anti-Semitism. Less remembered, however, are several other moments that didn't exactly smack of sweetness and light. For example, the Grand Mufti of Jerusalem's Al-Aqsa mosque gave an interview on the eve of an encounter with John Paul in which he denied that six million Jews had died during the Holocaust, adding, "It's not my fault if Hitler hated the Jews. Anyway, they hate them just about everywhere." Later, during an inter-faith meeting, a prominent rabbi asserted that John Paul's presence confirmed Israeli sovereignty over Jerusalem, causing a Muslim sheikh to unleash an anti-Israeli tirade and then storm out. None of this was the result of anything the pope said or did, but his mere presence unleashed it.

If Benedict's trip generates the same sort of turbulence, but without a towering image of reconciliation to smooth things out, the world could be in for a bumpy ride.

It's equally possible, however, to envision the exact opposite -- a bravura papal performance that transforms Benedict's public profile, and, more importantly, brings hope to the Holy Land on multiple levels.

On his previous foreign trips, Benedict has risen to the occasion more often than not. In Turkey in late 2006, he stood in silent prayer inside Istanbul's Blue Mosque, alongside the Grand Mufti, offering a classic image of brotherhood. In a flash, that moment undid much of the damage from a controversial speech at Regensburg, Germany, two months earlier that had angered Muslims because of Benedict's citation of a Byzantine emperor who had linked Muhammad to violence. In the United States in April 2008, Benedict XVI turned in another masterful performance. Most notably, he helped heal the wounds of the sexual abuse crisis with his candor and his unprecedented meeting with victims. Polls afterward showed that large majorities of Americans rated the trip a success, saying it had improved their image of the Catholic church.

If Benedict is once again at the top of his game, this week's trip could become another showcase for the pope -- potentially making an important contribution to the peace process, revitalizing the dwindling Christian presence in the Holy Land, and setting relations with both Jews and Muslims on a new path.

That, of course, is a decidedly best-case outcome. To be honest, the legions of local organizers, Vatican officials, and security personnel responsible for the nuts and bolts of the trip would probably settle for something more modest -- a friendly, incident-free week that leaves behind fond memories, even if it doesn't change the world. (Israel alone is mobilizing some 80,000 security personnel to protect the pontiff, although officials say they have no information about specific threats.)

Hence the drama of the next seven days: Which of these scenarios -- or, perhaps, which combination of all three -- will materialize?

Archbishop Romero, martyr, to be made saint at Vatican ceremony Oct. 14