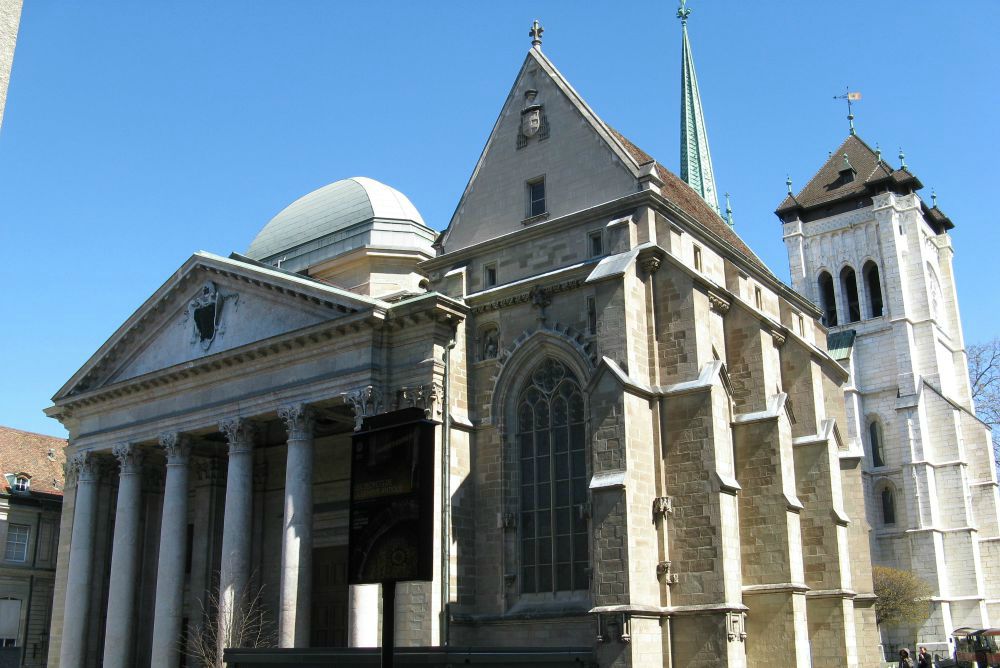 Pictured in April 2015, St. Peter (St. Pierre) Cathedral in Geneva, Switzerland, was built between 1160 and 1252. Following some destruction in 1535 and the Protestant Reformation, it now is part of the Reformed Protestant Church of Geneva. (Wikimedia Commons/Yair Haklai)

Pope Francis' upcoming visit to Geneva to celebrate the 70th anniversary of the World Council of Churches, a fellowship of 348 Christian denominations, is taking on special significance because of the increasingly divisive nature of global politics, say several former ecumenical dialogue participants.

The June 21 one-day trip — only the third such visit by a pope to the council's headquarters, with the last undertaken by John Paul II in 1984 — could work to highlight the possibility of living in harmony even amidst sometimes stubborn and long-lived disagreements, they say.

"What we're seeing around the world with the rise of populist and nationalist movements is greater and greater fragmentation," said Brooklyn Auxiliary Bishop James Massa, who led the U.S. bishops' ecumenical and interreligious secretariat from 2005-2011.

The pope's visit to the World Council of Churches, which is being styled as an "ecumenical pilgrimage" and takes the theme "Waking, Praying and Working Together," will primarily consist of three brief encounters: an ecumenical meeting, an ecumenical prayer, and a lunch with the organization's leadership. 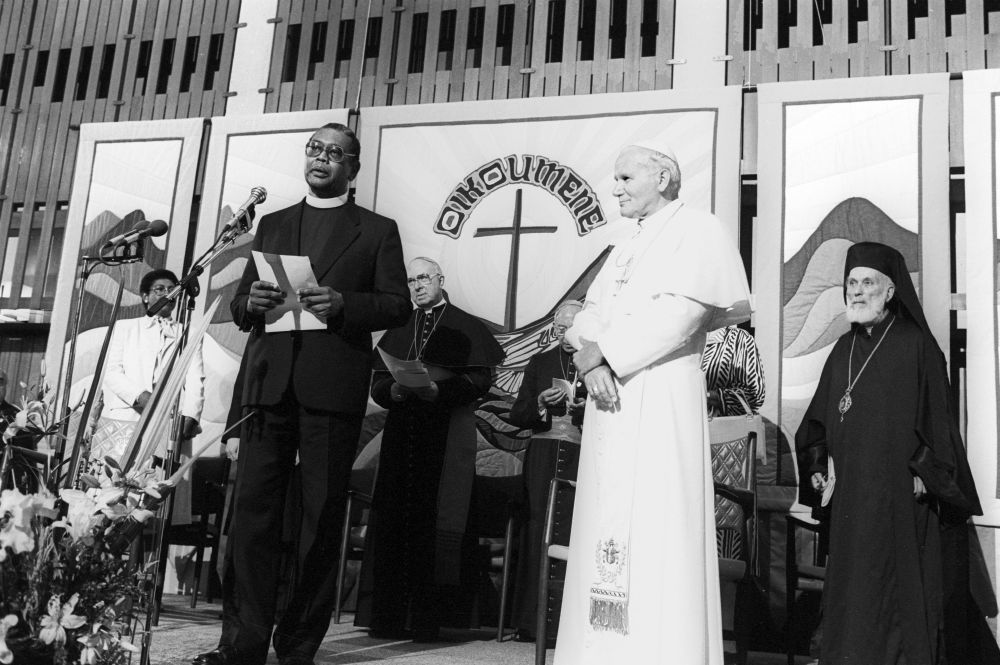 Pope John Paul II listens as the Rev. Philip Potter, general secretary of the World Council of Churches, speaks during the pope's visit to the WCC in Geneva June 12, 1984. Also pictured is Metropolitan Emilianos Timiades, right. Pope Francis is scheduled to attend an ecumenical prayer service and meeting at the WCC during a one-day visit to Geneva June 21. (CNS/Peter Williams, courtesy of World Council of Churches)

Paulist Fr. Ron Roberson, the current associate director at the U.S. bishops' secretariat, called the pope's coming visit "an expression of the Catholic Church's support for the World Council and the work that it's been doing."

The World Council of Churches was an outgrowth of a late 19th-century ecumenical movement that brought together many Protestant denominations and Eastern and Oriental Orthodox churches. More than 100 churches voted to found the organization at the end of the 1930s, but its first assembly was delayed until 1948 due to World War II.

The group holds an assembly every six years; the last was held in South Korea in 2013.

Maryknoll Sr. Joan Delaney, who worked for the Pontifical Council for Promoting Christian Unity in the 1980s and was assigned to the staff of the World Council's Commission on World Mission and Evangelism, noted that the June 21 trip is the first of a pontiff specifically coming to visit the World Council.

When Pope Paul VI visited the organization in 1969, he had primarily come to Geneva for the 50th anniversary of the International Labor Organization. In 1984, John Paul spent five days in Switzerland and visited a total of 14 cities.

"It's very significant that we would celebrate specifically this anniversary with them," said Delaney.

Massa, who Francis appointed to Brooklyn in 2015, said the pope "wants to honor the legacy" of the council, which he also called "a catalyst for the Catholic engagement with the modern ecumenical movement."

He remarked on the influence that World Council documents had on renowned theologian Dominican Fr. Yves Congar, evinced in both his 1966 book Tradition and Traditions and in the priest's drafts that led to the Second Vatican Council document Dei Verbum.

"You can see the streams that are flowing into official Catholic doctrine as articulated by the council that are coming out of these ecumenical discussions that were sponsored by the WCC," Massa said. "It's just a great legacy."

Among specific issues expected to be discussed by the Francis and World Council leadership are those that have most defined Francis' papacy: immigration, climate change and the range of global conflicts. 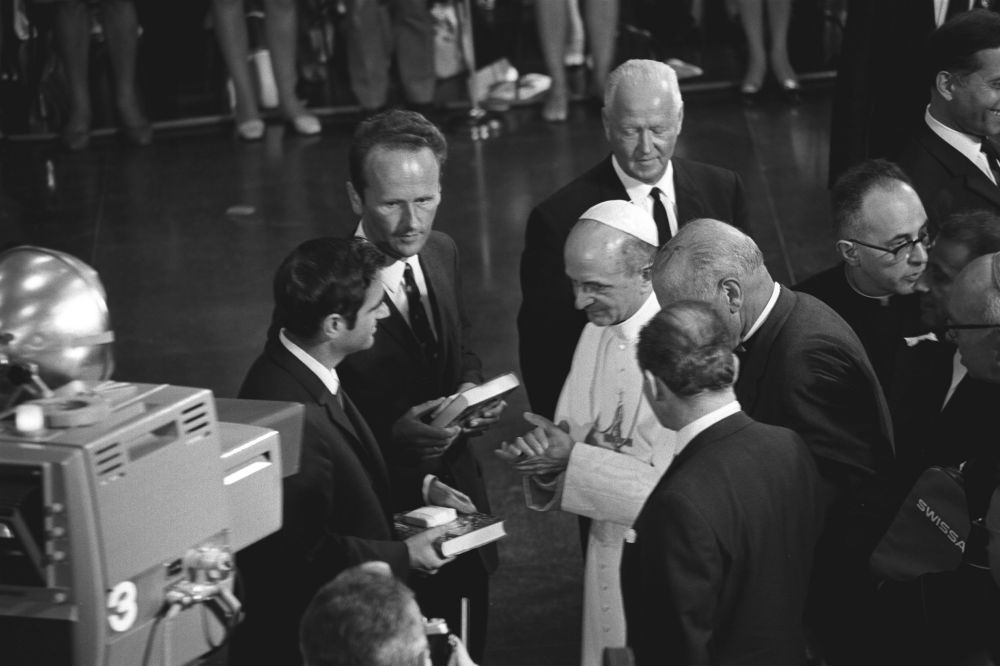 Msgr. John Radano, who was a staff member at Christian Unity from 1984-2008 and participated in a number of the Catholic Church's dialogues with Protestant denominations, said care for creation might be a particular area of discussion as the council, like Francis, has expressed "deep concern" about environmental destruction.

Delaney, however, wondered if it might not be time for the Christian leaders to have a frank conversation about a difficult topic: the primacy of the pope, bishop of Rome, among the churches. She said that after his 1984 visit, John Paul II had asked the council to consider the matter.

"I think it would be an appropriate time to evaluate where that discussion is at," she said.

"If you just discuss [other] things it can be a meeting of something like NGOs," said Delaney, adopting language Francis has often used to warn against the Catholic Church acting as if it were a nongovernmental organization.

"What these things have to be discussed in is in the light of Christian unity," she said. "How far do these efforts promote or hinder Christian unity? That tends sometimes to be a bit overlooked."

Delaney noted that the conversation around papal primacy is "very difficult," but said finding unity is "the fundamental aim of the World Council, and it's our fundamental aim in cooperation with them."

"One issue is that when the problems are difficult, you tend to move into things that are more practical and more satisfying and less controversial," she added. "So you have to be called back to the original purpose."

Radano, now an adjunct theology professor at Seton Hall University, said the World Council had recently brought up the issue of papal primacy in a 2013 document written by its Faith and Order Commission, titled "The Church: Towards a Common Vision."

While that document did not go into depth about the matter, he said the fact it even mentioned the issue was "very important."

The commission said that there had been "significant ecumenical discussion" about a "universal ministry of primacy" but that "there is still much work to be done to arrive at a convergence" on the issue.

Radano said the 2013 study pointed to one of the benefits to the Catholic Church's ongoing dialogue with the World Council, which takes place through a Joint Working Group. He said the group does a "particular service to the whole ecumenical movement" by occasionally undertaking theological studies.

"It helps to keep people informed with ecumenical developments," he said. "In a certain way, the study documents provide a source for a think tank on what is going on in the ecumenical movement."

Delaney said the dialogue between the Catholic Church and the World Council is of unique value among the many such ecumenical dialogues.

"It's the only way we can keep in touch with developments in the Protestant churches and how they help or hinder Christian unity," she said. "So, it's very important."

Francis' trip to Geneva will be his 23rd outside Italy. Switzerland will be the 34th country he has visited.

Among those trips, the pope has taken four other one-day visits: to Tirana in Albania, to Strasbourg in France for speeches to the European Council and Parliament, to Sarajevo in Bosnia and Herzegovina, and to the Greek island of Lesbos to visit migrants entering Europe.

Francis' next scheduled visit is to Ireland Aug. 25-26, to participate in the World Meeting of Families.

*An earlier version of this story made an incorrect claim about Pope Francis' upcoming celebration of the Mass in Geneva.