Preparing for Christmas one papal homily at a time 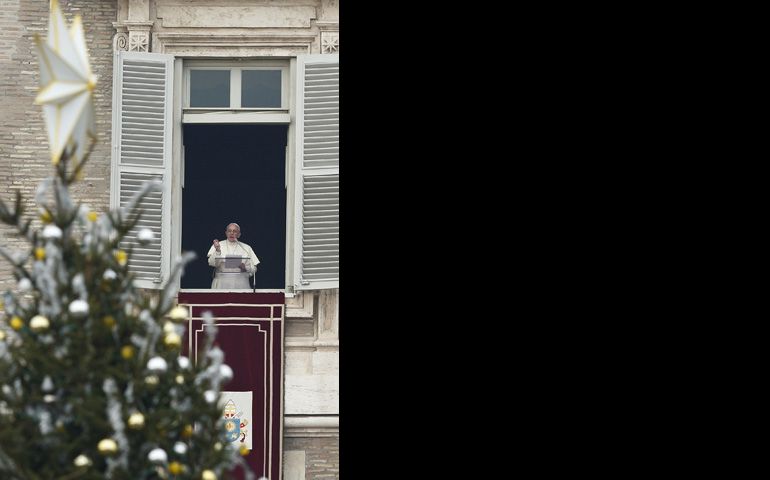 The Christmas tree decorates St. Peter's Square as Pope Francis leads an Angelus from the window of his studio overlooking the square at the Vatican on Dec. 22, 2013. (CNS/Paul Haring)

Vatican City — As Advent got underway, Pope Francis included in his morning Mass homilies specific graces Catholics should pray for as they prepare for Christmas.

In the chapel of his residence Tuesday, Pope Francis ended his homily by telling the small congregation, "Let us ask the Lord during this Advent time to draw us closer, closer to his mystery and do so on the path that he wants us to take: the path of humility, the path of meekness, the path of poverty, the path of recognizing we are sinners."

Preaching two days later, he said, "Let us ask the Lord to help us be based firmly on the rock that he is; our hope is in him. We are all sinners, we are weak, but if we put our hope in him we can move forward."

With highlights from his morning Mass homilies available online and on Vatican Radio, millions of people use Pope Francis' homilies as a guide through the church's liturgical year.

The first Sunday of Advent, Nov. 30 this year, marks the beginning of a new year of Mass readings, a full calendar of seasons and feast days.

While every celebration of Mass is a commemoration of the life, death and resurrection of Jesus, the church's liturgical calendar is designed to help Catholics focus on specific events as they progress through the year and through time.

Beginning a new church year with the Advent preparation for Christmas, he said in 2013, "we rediscover the beauty of all being on a journey: the church, with her vocation and mission, and all humanity, peoples, civilizations, cultures, all on a journey across the paths of time."

When people grow weary and feel the weight of sinfulness or struggle to keep moving forward with hope in the new life Christ brings, Pope Francis wants them to realize how strongly the Scripture readings for Advent Masses emphasize God's love, tenderness and forgiveness. In fact, the pope wants people to know that the strength to recognize their sins and ask God's mercy comes from knowing that God will welcome them back with open arms.

"The Lord, the great God, is not afraid of tenderness. He is tenderness, he is born a baby, he makes himself small," the pope insisted during a Mass one Advent day last year.

A desperate search for perfect gifts may be part of many people's Advent days, but Pope Francis thinks it might be even tougher to find the perfect Advent atmosphere: a bit of silence. It is good during this season to listen to God, who speaks quietly, tenderly, like a mother or father, the pope stressed in another Advent homily in 2013. "When a child has a bad dream and wakes up crying, Dad goes and says: 'Don't be afraid, don't be scared. I'm here.' The Lord speaks this way too."

That, said the pope, "is the music of the language of the Lord, and we, in preparation for Christmas, ought to hear it." While Christmas usually "seems to be a very noisy holiday," he was confident "it would do us good to have a little silence and to hear these words of love, these words of such nearness, these words of tenderness."

In Advent, and throughout the year, Pope Francis' homilies are a lens for examining and understanding the key themes of his pontificate, particularly God's mercy, human sinfulness, the evils of gossip and corruption, and the humility required of Christians.

In his short homilies -- usually three to five minutes long -- he uses catchy, down-to-earth phrases. For example, recently he coined the term "ecclesiastical micro-climate" to describe the temptation of Catholics to treat the church as a private club. On another occasion he said ridding oneself of vanity is like peeling an onion, taking one layer away at time; even if one succeeds, he said, "the smell stays on your hands."

As Advent drew to a close in 2013, Pope Francis asked Catholics to imagine themselves as Mary. During Advent's final week, "the church is like Mary: She is awaiting a birth," Pope Francis said. Like Mary, believers should say of Jesus and mean with all their hearts: "Come! I want to see your face."

Vatican | Preparing for Christmas one papal homily at a time

Why Christians should hate Christmas