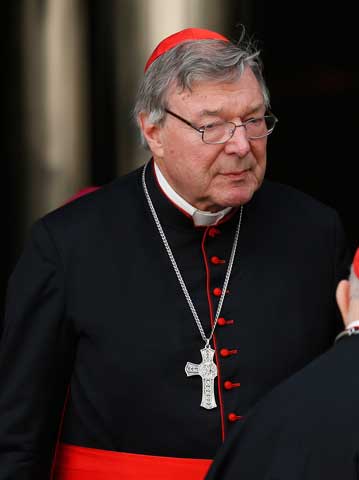 Episcopal and interest group reactions to the conclusion of the Oct. 5-19 Synod of Bishops ranged from concern that the event's discussions would lead to doctrinal confusion, to elation that they had reopened an atmosphere of dialogue and discussion in the church.

Following is a sampling of such reactions to the conclusion of the 2014 synod.

Archbishop Charles Chaput of Philadelphia said Oct. 23 that he was "very disturbed" by the synod's discussions of the church's pastoral practices toward divorced and remarried persons and toward gay people.

The discussions, Chaput said, sent a confusing message and "confusion is of the devil."

The archbishop, who is organizing the Vatican's World Meeting of Families in Philadelphia for September 2015, was speaking at a lecture in New York for the ecumenical journal First Things. He made his remarks about the synod in response to a question from the audience at the lecture.

"I'm not fundamentally worried because I believe the Holy Spirit guides the church," Chaput concluded his answer to the question. "The last report at the end was certainly much better than the interim listing of the topics that were talked about."

Cardinal Reinhard Marx of Munich and Freising said in an interview in late October that the synod had opened the doors of the church.

"The doors are open -- wider than they have ever been since the Second Vatican Council," said Marx, who is head of the German Bishops' Conference.

"The synod debates were just a starting point," Marx told the German weekly newspaper Die Zeit. "Francis wants to get things moving, to push processes forward. The real work is about to begin."

"This pope knows exactly what he is doing, let no one doubt that," Marx said. "Francis wants us to move. His frequent use of the [Italian] word avanti -- get moving -- is ample proof of that."

The pope, Marx said, "is convinced that one doesn't need clever tactics if one is not afraid."

Marx said that in Francis' final address to the synod Oct. 18, the pope "also for the first time describes how he sees his own office."

The pope, said Marx, essentially said: "As long as I am with you, you can discuss everything without being afraid. I'll see to it that we stay on the church's track."

Bishop Thomas Tobin of Providence, R.I., said Oct. 21 that the synod reflected a danger that the church was losing its prophetic voice in modern culture.

Writing on his diocesan blog, Tobin stated: "In trying to accommodate the needs of the age, as Pope Francis suggests, the Church risks the danger of losing its courageous, counter-cultural, prophetic voice, a voice that the world needs to hear."

"The concept of having a representative body of the Church voting on doctrinal applications and pastoral solutions strikes me as being rather Protestant," he wrote.

Cardinal George Pell said Oct. 24 that the task for Catholics before the 2015 synod is to explain "the necessity of conversion, the nature of the Mass," and "the purity of heart the Scriptures require of us to receive holy Communion."

Speaking in prepared remarks to an annual pilgrimage of Latin Mass enthusiasts to Rome in late October, the Australian cardinal also said that the "college of bishops and all synods work by consensus."

Catholics, he said, have to work to build a consensus "out of the present divisions."

Francis appointed Pell, former archbishop of Sydney, in February as head of the Vatican's new Secretariat for the Economy.

"Pastoral practice and teachings can only be changed by consensus," Pell said in his remarks, given for the annual Summorum Pontificum pilgrimage.

"Doctrine does develop, we understand truth more deeply, but there are no doctrinal backflips in Catholic history," the cardinal continued. "The apostolic tradition announced first by Christ and founded in the Scriptures is the touchstone for truth and genuine pastoral practice."

Bishop Robert Lynch of St. Petersburg, Fla., said Oct. 21 that the synod represented the exercise of collegiality "in its most pristine form."

Lynch, former general secretary of the U.S. Conference of Catholic Bishops, wrote on his diocesan blog that another bishop had told him before the October meeting that "the Church would cross the Rubicon at this extraordinary synod."

"I think he was right," Lynch wrote. "I think Blessed Pope Paul VI who envisioned synods as a manner of governance at the service of both Pope and universal Church must have been smiling from his place in heaven. It was collegiality exercised in its most pristine form and the resulting statement going forth guarantees that the next time the [bishops] gather … again, they will have had more time to pray, ponder and reflect on the Church in the modern day."

Equally Blessed, a coalition of four U.S. Catholic organizations focused on equality for gay, lesbian, bisexual and transgendered people, said Oct. 18 that the synod reflected that some bishops recognize the Vatican must change its language toward gay people.

"This month's Synod on the Family confirms that there are deep divides in the Catholic hierarchy around issues of human sexuality and that even in the Vatican many Catholics know that it is past time for the church to reconcile with faithful LGBT Catholics," the group said in a statement following the release of the synod's final document.

"The synod's message to the faithful stated that 'Christ wanted his Church to be a house with doors always open to welcome everyone,' " their statement continued. "It is unfortunate that in their final document, the synod attempted to shut those doors on the thousands of faithful LGBT Catholics and their families who have been left out in the cold by a church that repeatedly refuses to acknowledge the sanctity of their lives and their loves."

New Ways Ministry, a national Catholic ministry for LGBT people, asked Oct. 18 that the 2015 synod include testimonies from such people "so that the bishops can learn first-hand about their experiences of faith and love."

"This synod revealed that there are some strong voices for LGBT equality and for change in church teaching, something which was not known clearly before the meeting," the group's executive director, Francis DeBernardo, said in a statement.

"Now that these voices have been bold enough to speak, more bishops who think like them will surely follow their example," DeBernardo continued. "The biggest problem in the Church up to this point has not been lack of support among the hierarchy on LGBT issues, but lack of courage for those bishops to speak out what they truly think. The silence has ended. Nothing will be the same."

A version of this story appeared in the Nov 7-20, 2014 print issue under the headline: Reactions from concern to elation.