Recalling Pope Adrian VI, Francis asks priests to be forgiving in their relationships and ministries 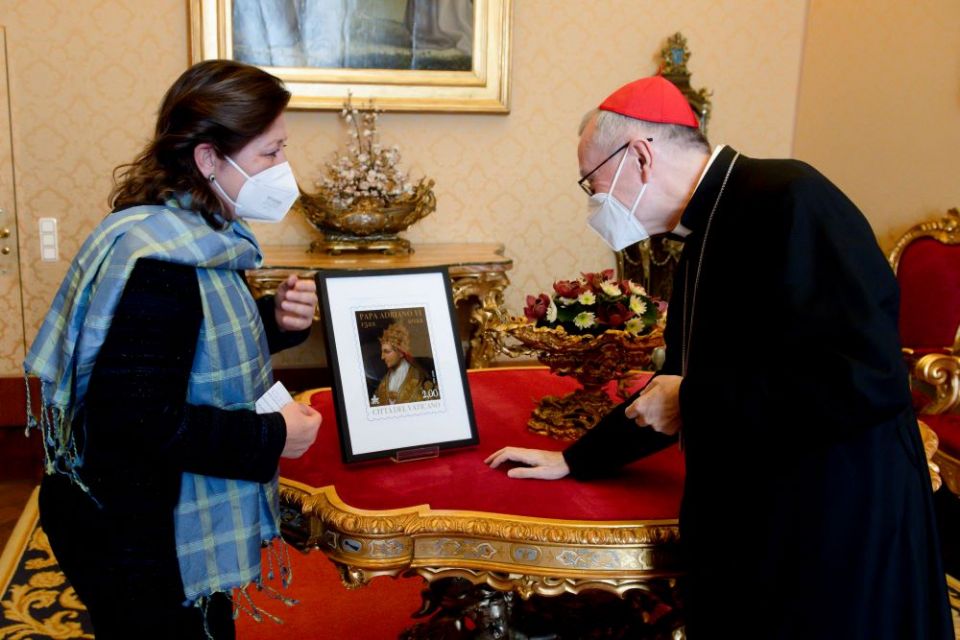 Caroline Weijers, ambassador of the Netherlands to the Holy See, presents a Vatican postage stamp showing Pope Adrian VI to Cardinal Pietro Parolin, Vatican secretary of state, at the Vatican March 4. The stamp marks the 500th anniversary of the 1522 election of Pope Adrian VI, a Dutchman who was the last non-Italian pope until the election of St. John Paul II in 1978. (CNS/Vatican Media)

Vatican City — Marking the 500th anniversary of the election of Pope Adrian VI, "the penultimate pope coming from the Germanic world," Pope Francis asked German priests to be men of peace and reconciliation in their personal lives as well as in their ministries.

The priests meeting the pope April 7 study in Rome and live at the Pontifical Teutonic Institute of Santa Maria dell'Anima. Pope Adrian VI, who was born in the Netherlands and elected pope in 1522, is buried in the institute's church. The next pope elected from the "Germanic world" was Pope Benedict XVI in 2005.

Elected just five years after Martin Luther sparked the Protestant Reformation by publicly posting his 95 Theses, Pope Adrian "above all sought reconciliation in the church and in the world," Pope Francis said.

He sent his nuncio to the Diet of Nuremberg "to reconcile Luther and his followers with the church and expressly asked forgiveness for the sins of the prelates of the Roman Curia," the pope said, jokingly adding, "Courageous! He would have plenty of work today!"

But, he said, Pope Adrian always will be remembered "as a fearless and tireless worker for faith, justice and peace."

Remembering Pope Adrian's "solicitude for the promotion of concord and reconciliation," Pope Francis asked the priests to make that concern a priority in their ministries, especially through the sacrament of penance.

"This is important: the task of the confessor is to forgive, not to torture," he told them. "Be merciful, be great at forgiving, that is what the church wants you to be."

A priest, he said, must devote time to listening to confessions "and doing it well, with love, with wisdom and with great mercy."

"But not only that. This ministry also involves preaching, catechesis and spiritual accompaniment," the pope said.

But, he added, "it requires witness first of all."

"To be a good servant of Christ's forgiveness, a priest must know how to forgive others," Pope Francis said. "He must be merciful in his relationships. He must be a man of peace and communion."

Vatican | Recalling Pope Adrian VI, Francis asks priests to be forgiving in their relationships and ministries