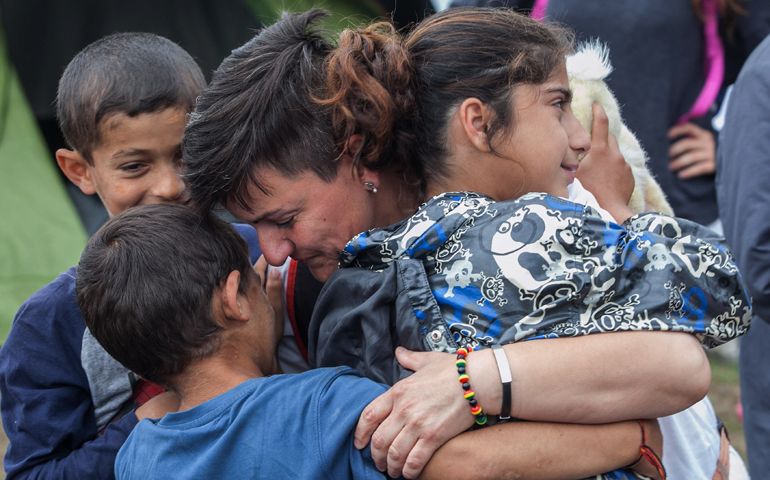 A volunteer from a humanitarian organization hugs refugee children June 13 during a police operation at a makeshift camp in Polykastro, Greece. (CNS/Nikos Arvantidis, pool via EPA)

Vatican City — Assist and accompany refugees while working to build peace in the world, Pope Francis urged on the eve of World Refugee Day.

"Refugees are people like everyone, but war took away their home, work, relatives and friends," he said in the run-up to the United Nations-sponsored day June 20.

Seeing the faces and hearing the stories of refugees should lead Christians "to renew our obligation to build peace through justice," he said after praying the Angelus with people gathered in St. Peter's Square June 19.

"This is why we want to stand with them -- to encounter them, welcome them, listen to them -- in order to become together with them artisans of peace, according to God's will," the pope said, referring to the day's theme, "We Stand #WithRefugees."

The pope's appeal followed a joint effort by the Vatican police, the Greek government and Rome's Sant'Egidio Community to bring a group of Syrian refugees to Italy.

The Vatican police accompanied nine refugees -- six adults and three children -- from Athens to Rome June 16. The community of Sant'Egidio, a Catholic lay organization, was arranging their housing.

The Syrian citizens, including two Christians, had been living in a refugee camp on the island of Lesbos -- the same island Pope Francis visited in April to highlight the dramatic situation of the people there. He brought three refugee families on his flight back to Rome.

Leaders and everyday people "get a pretty good model" from Francis about the Catholic and humanitarian duty of welcoming, advocating for and assisting refugees, Smolich told Catholic News Service June 20.

"I would encourage people, especially on World Refugee Day, to contact the part of the church that works with refugees," for example, Catholic Charities in the United States or Jesuit Refugee Service in Europe, he said, or ask and find out who else is helping in their community.

"There are so many things to do," he said, such as visiting refugees, helping with free meals, doing advocacy work, becoming part of a long-term coordinated effort or just helping out when time allows. "The possibilities are endless."

"People are doing this" in spite of what some political leaders say, he said, "so it is a question of bringing it to light" and inspiring more people to help rather than be paralyzed by fear.

While many fears can be legitimate, "fear often translates into anxiety," which "warps our understanding" of what is really happening and what can be done, he said.

Becoming familiar with or getting to know "real people who share our fears," but have experienced the difficulties of having to flee their homes, the Jesuit said, helps change the discussion from being centered on "'What am I afraid of' to 'How can we build solidarity?'"

While global estimates say more than 60 million people are fleeing violence, conflict or persecution, the best way to digest such a statistic is "to meet people one-on-one or hear them speak" so they don't remain an abstract number, the priest said.

JRS was urging people to meet with refugees or watch interviews on the JRS YouTube channel in order "to enable refugees to speak out about their hopes, their future" and help others learn about their lives, Smolich said.

Similarly, the International Catholic Migration Commission was commemorating World Refugee Day by sharing stories from resettled refugees around the world "as a witness to their strength and determination despite the hardship they have endured," the commission said.

It said it hoped the stories would encourage those still on the move and call attention to the benefits refugees bring to host countries.

People were also invited during the Year of Mercy to continue sending messages of hope on social media using the #HandsOfMercy hashtag and share personal stories with #StoryOfMercy or #WithRefugees.