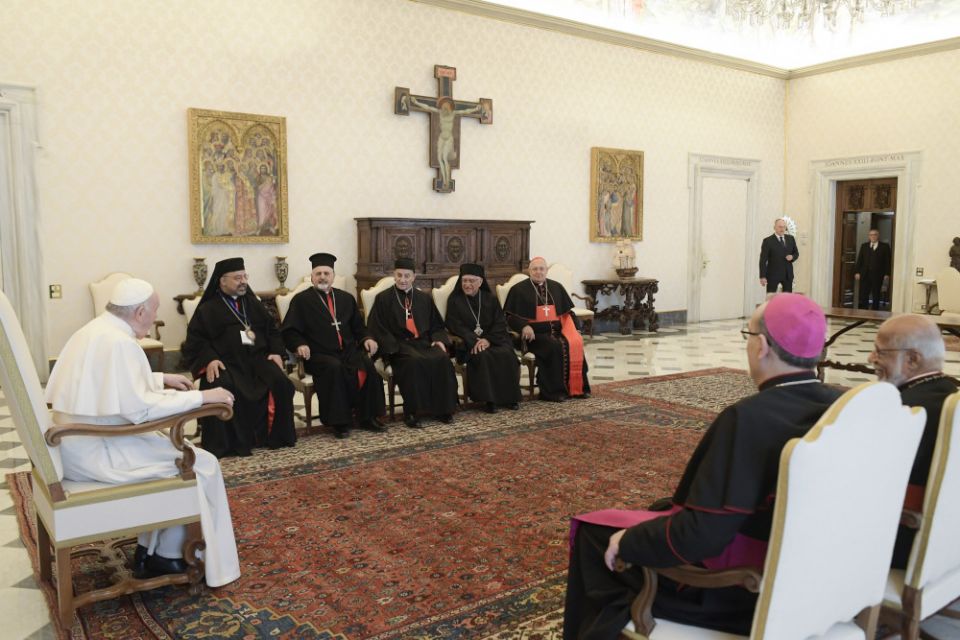 Pope Francis meets with most of the patriarchs and major archbishops of the Eastern Catholic churches in the library of the Vatican's Apostolic Palace Feb. 18, 2022. (CNS photo/Vatican Media)

Vatican City — Humanity seems to be a "champion in making war," which should "make us all ashamed," Pope Francis said.

Meeting leaders of the Eastern Catholic churches -- many from countries at war, facing the threat of war or dealing with the destruction left by war -- the pope said human beings seem to be "attached to wars, and this is tragic."

Francis made his comments and offered his encouragement and condolences Feb. 18 during a meeting with members of the Congregation for Eastern Churches, most of which are based in the Middle East, North Africa and Eastern Europe, including Ukraine.

"Humanity still seems to be groping in the dark," the pope said. "We have witnessed the massacres of the conflicts in the Middle East, in Syria and Iraq; those in the Ethiopian region of Tigray; and threatening winds are still blowing in the steppes of Eastern Europe, lighting the fuses and blasts of weapons and leaving the hearts of the poor and the innocent freezing."

At the same time, he said, "the drama of Lebanon continues, leaving many people without bread; young people and adults have lost hope and are leaving those lands."

Francis noted that the Congregation for Eastern Churches was established by Pope Benedict XV, who died 100 years ago. "He denounced the incivility of war as a 'useless slaughter,'" but "his warning went unheeded by the leaders of the nations involved in the First World War. Just as St. John Paul II's appeal to avert the conflict in Iraq went unheeded."

"At this moment, when there are so many wars everywhere, this appeal both of the popes and of men and women of goodwill is unheard," he said, adding that "it seems that the greatest prize for peace should be given to wars: a contradiction!"

People love to talk about how humanity has made so much progress in science, technology, knowledge and "so many beautiful things," but it "is going backwards in weaving peace," he said. "We must pray and ask forgiveness for this attitude."

In the homelands of many of the Eastern Catholic churches, he said, people are struggling and yet they hold fast to their faith and religious traditions.

"Your daily life is therefore like a mixture of the precious dust of the gold of your past and the heroic witness of faith of many in the present, together, however, with the mud of the miseries for which we are also responsible, and the pain caused to you by external forces," the pope said.

And, with migration, he said, the Eastern churches also "are seeds placed on the stems and branches of centuries-old plants, carried by the wind to unthinkable frontiers."

The faithful who move abroad and raise their families far from their homelands still have a right and duty to preserve the liturgy and customs of their particular church, he said. And while translations of the liturgical texts are permissible, the rites themselves must follow "what has been established by the synods and approved by the Apostolic See, avoiding liturgical particularities which, in reality, manifest divisions of another kind within the respective churches."

Additionally, the pope said, when adapting or reforming the liturgy, Eastern Catholics must remember that "the Orthodox and Oriental Orthodox churches are watching us; even if we cannot sit at the same eucharistic table, nevertheless we almost always celebrate and pray the same liturgical texts."

Beware, the pope said, of any changes that "can harm the journey toward the visible unity of all Christ's disciples."

"The world needs the witness of communion," Francis said. "If we give scandal with liturgical disputes -- and unfortunately there have been some recently -- we are playing into the hands of the one who is the master of division."

'Words can be kisses,' but also 'swords,' pope writes in new book