'Let's not wait for the theologians,' says Pope Francis about sharing the Eucharist 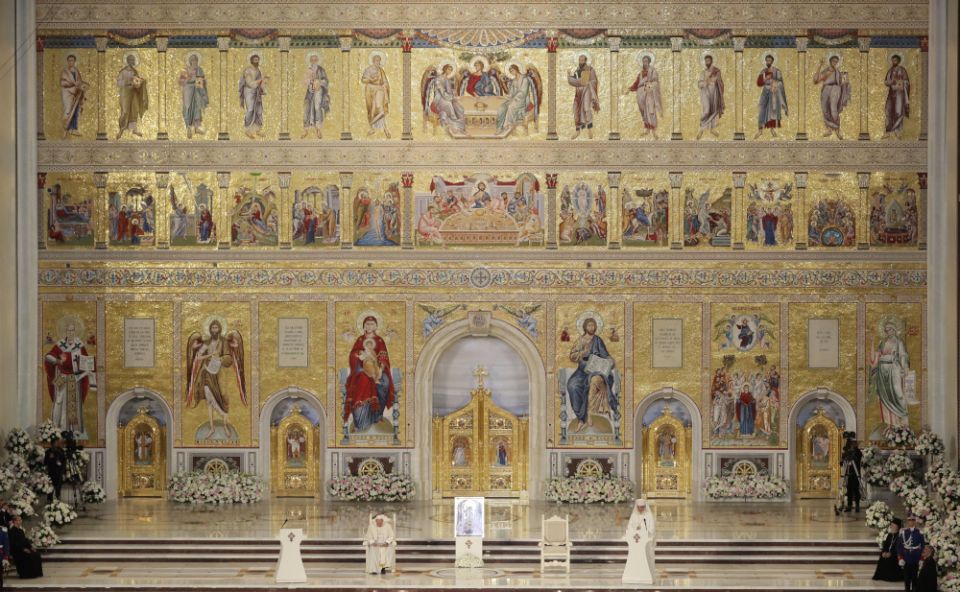 Pope Francis, left, prays with Romanian Orthodox Patriarch Daniel at the National Cathedral in Bucharest, Romania, on May 31, 2019. (AP/Andrew Medichini)

On the plane returning to Rome from Romania, Pope Francis made an extraordinary statement on the role of theology in ecumenical relations at his press conference June 2.

In the past, church officials have stressed the need for theological agreement before Christian unity or Eucharistic sharing could be possible.

As a result, the Catholic Church is involved in extensive and complex theological dialogues with other Christian churches. These dialogues have made great progress in dealing with issues raised by the Reformation, but new issues (women’s ordination, gay marriage, abortion) have arisen that divide the churches.

This makes it very difficult to reach a final agreement.

But Francis told reporters on the plane, "Ecumenism is not getting to the end of discussions, it’s done walking together," according to Crux. The journey is more important than the destination.

As a result, Francis stresses the ecumenism of shedding blood together and of working together in service to the poor, the sick and the marginalized. This fits with his famous statement that "facts are more important than ideas." How we live our faith is more important than how we explain it.

But during the press conference Francis went further. As he explained on the plane, "there is already Christian unity," according to the National Catholic Reporter. "Let’s not wait for the theologians to come to agreement on the Eucharist."

Is the pope signaling his willingness to move toward Eucharistic sharing without total theological agreement?

This would be consistent with everything else he is saying. If it is the journey, not the destination, that is important, then why not share food during the trip? Why wait until we arrive?

Such a view would see the Eucharist as a unifying sacrament rather than a celebration of unity.

Ironically, during his visit, theological divisions made it impossible for the pope even to pray the Lord’s Prayer with Romanian Orthodox Patriarch Daniel, as right-wing Orthodox objected to their praying together. As a result, the pope prayed it first in Latin, followed by the patriarch saying it in Romanian.

But the pope revealed that from what he could see, most of the people at the service in the Orthodox cathedral prayed both times.

"The people went beyond us leaders," explained Francis.

Likewise, in the Catholic Church, the people often lead the way and the theologians follow, not the other way around.

Today, Catholics are encouraging their Protestant spouses to join them at Communion. Divorced and remarried Catholics are returning to Communion. Gay couples approach Communion ministers together. Catholic couples are practicing contraception.

Column | 'Let's not wait for the theologians,' says Pope Francis about sharing the Eucharist