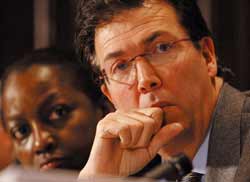 The announcement from Cardinal William Levada, Prefect of the Congregation for the Doctrine of the Faith, of the new norms for “more serious crimes” (de gravioribus delictis) was certainly a step forward in the church’s law regarding the sexual abuse of children.

The three helpful changes in the church’s law are

These are all changes for the good in the church’s universal law, which applies to the church in every country everywhere. Unfortunately, it still leaves the church universal a few steps behind the church in the United States. Missing from the universal norms announced by Cardinal Levada is any mention of the “zero tolerance” policy of the American church, enshrined in the Dallas Norms, adopted by the American bishops and approved by the Apostolic See.

Norm 9 of the Dallas Norms says, quite clearly, “[T]he diocesan bishop shall exercise this power of governance to ensure that any priest or deacon who has committed even one act of sexual abuse of a minor...shall not continue in active ministry.”

This norm has worked well in the United States, and has helped largely to reduce the number of reported cases of abuse by clergy against children. Why, in the changes announced by Cardinal Levada, was it not made part of the church’s universal law? Surely Cardinal Levada, the first American to head the Congregation for the Doctrine of the Faith, is not unaware of the success of the “zero tolerance” norm in the United States. Surely he is not unaware of the statement of Pope John Paul II to the consistory of American cardinals that met in the Vatican in April of 2002, in which the Holy Father said, quite emphatically, speaking not only of America, but of the universal church that he shepherded, “People need to know that there is no place in the priesthood for those who would harm the young.”

The time is long past, in our church, for saying one thing and doing another. If Cardinal Levada stands behind the successor of Peter, these words of John Paul II should have a meaning beyond the rhetorical. They should become a part of the church’s universal legal system. But that opportunity was tragically missed last week.

But that was not all that was missed. Lacking in both the Dallas Norms governing the American church and Cardinal Levada’s announcement of changes in the church’s universal laws was any mention of the fate of bishops who, by ignoring the reported sexual abuse of children by their priests, allow them to victimize yet other children.

This truly is the elephant in the sanctuary.

The Dallas Norms effectively shifted the burden of the abuse crisis from the bishops who ignored the abuse to the priests who perpetrated it. The universal norms announced by Cardinal Levada ignore the problem entirely. And yet, we must come to terms with this part of the problem. Unlike in the American church, in Ireland, the bishops who re-assigned priest abusers, had the courage to resign their bishoprics. But even here, there is a problem. It should not be up to the bishop to dismiss himself. Something in the church’s law should make this happen.

And there is something in the church’s law that does. Canon 1389, §2, says that “A person who through culpable negligence illegitimately places or omits an act of ecclesiastical power, ministry, or function with harm to another is to be punished with a just penalty.” Certainly bishops who have knowingly or negligently re-assigned a known priest child-abuser to yet another parish have performed an act of ecclesiastical power that has caused harm to another, i.e., the additional child victims.

In his announcement, Cardinal Levada re-affirms that “the right, as mandated by the Roman Pontiff to judge...bishops” belongs to the Congregation for the Doctrine of the Faith. It is time for some of those canonical trials of bishops who have re-assigned priests with a known history of child sexual abuse to start. Only then will we laity know that the church has a legal system that really works. It’s up to you, Cardinal Levada, to fill in this missing part of the church’s law.

[Nicholas P. Cafardi is a civil and canon lawyer, and a professor and former dean at Duquesne University School of Law in Pittsburgh.]

Francis and the 'Culture of Encounter'