Stop fueling the madness, the monster of war, pope says in new book 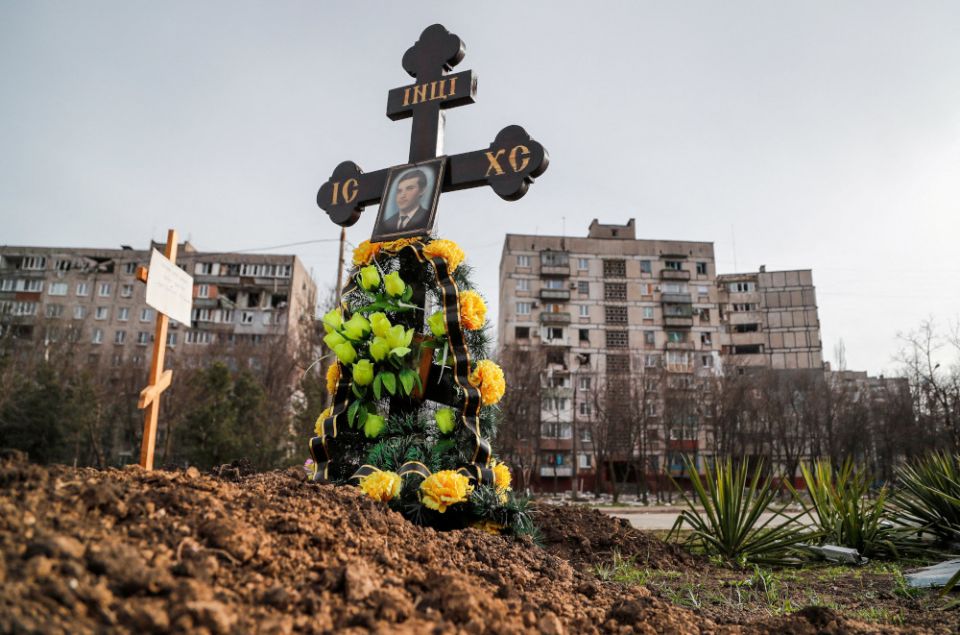 Graves of Ukrainian civilians killed during the Russian war are seen next to apartment buildings in the southern port city of Mariupol, Ukraine, April 10, 2022. (CNS photo/Alexander Ermochenko, Reuters)

Vatican City — To wage war, which marks a failure of politics and humanity, is to surrender to the forces of evil, Pope Francis wrote in a new book.

"War is not the solution, war is madness, war is a monster, war is a cancer that feeds off itself, engulfing everything!" he wrote.

And, he added, "war is a sacrilege that wreaks havoc on what is most precious on our earth: human life, the innocence of the little ones, the beauty of creation."

The pope's remarks were part of the introduction of a new book in Italian, titled, "Contro la Guerra. Il Coraggio di Costruire la Pace" ("Against War. The Courage to Build Peace"). Vatican News published the introduction April 13. The 192-page book, published by Solferino press and the Vatican publishing house, was to be released April 14.

"Every war represents not only a defeat of politics but also a shameful surrender in the face of the forces of evil," the pope wrote in the introduction.

When people allow themselves to be "devoured by this monster represented by war," he wrote, then "everyone loses, we destroy God's creatures, we commit sacrilege and prepare a future of death for our children and grandchildren."

"Greed, intolerance, ambition for power, violence are motives that advance the decision for war, and these motives are often justified by a war ideology that forgets the immeasurable dignity of human life, of every human life, and the respect and care we owe it," the pope wrote.

War, he wrote, "is pure madness, its only goal is destruction, and it develops and grows through destruction," he wrote, blaming people's failure to remember the past or to listen to what others experienced during the "barbarity" of war.

"If we had memory, we would remember what our grandparents and parents told us, and we would feel the need for peace just as our lungs need oxygen," he wrote.

The pope recalled the destruction "caused by war, fratricidal violence and terrorism" he witnessed during his pilgrimage to "martyred Iraq" in 2021.

"I saw the rubble of homes and the wounds of hearts, but also seeds of hope for rebirth. Never would I have imagined then that one year later a conflict would break out in Europe," he wrote, highlighting the conflict in Ukraine, but also giving voice to the many other wars and "forgotten wars" going on around the world.

"These wars seemed 'distant' to us," until war broke out in Europe, he wrote.

"Ukraine has been attacked and invaded," and those affected include so many innocent civilians, "forced to live in shelters dug in the belly of the earth to escape the bombs, with families that are divided because the husbands, fathers, grandfathers remain to fight, while the wives, mothers and grandmothers seek refuge."

Seeing so many "heartbreaking images" and hearing "the cries of children and women," he wrote, "we can only shout: 'Stop!' War is not the solution."

The pope said the use of atomic energy for the purposes of war is "a crime" against humanity and creation, and the possession of atomic weapons is immoral; he lamented the "specter of a nuclear war" looming over Europe.

War must be stopped before it reaches the front lines by eradicating hatred from people's hearts, the pope wrote.

To do that, "we need dialogue, negotiation, listening, diplomatic capacity and creativity, far-sighted politics capable of building a new system of coexistence that is no longer based on weapons, on the power of weapons, on deterrence," he wrote.

Wars will only be stopped "if we stop 'fueling' them," he wrote, repeating his appeal that money normally spent on arms and other military expenditures instead be used "to set up a global fund to finally eliminate hunger and foster development in the poorest countries, so that their inhabitants would not resort to violent or deceptive solutions and would not be forced to leave their countries in search of a more dignified life."

"Step by step, we are moving toward catastrophe" as if it were unavoidable, he wrote. "But we must forcefully repeat: No, it is not inevitable! No, war is not inescapable!"

Despite the difficulty in seeing signs of hope amid "the images of death that reach us from Ukraine," he wrote, "there are millions of people who do not aspire to war, who do not justify war, but ask for peace," especially young people who are begging for "the possible and the impossible: to stop war, to stop wars."

Everyone must respond with "never again war" and commit themselves to building a world that is more just, "where peace triumphs, not the folly of war," he said, and where there is "mutual forgiveness, not the hatred that divides and makes us see an enemy in the other, in those who are different from us."