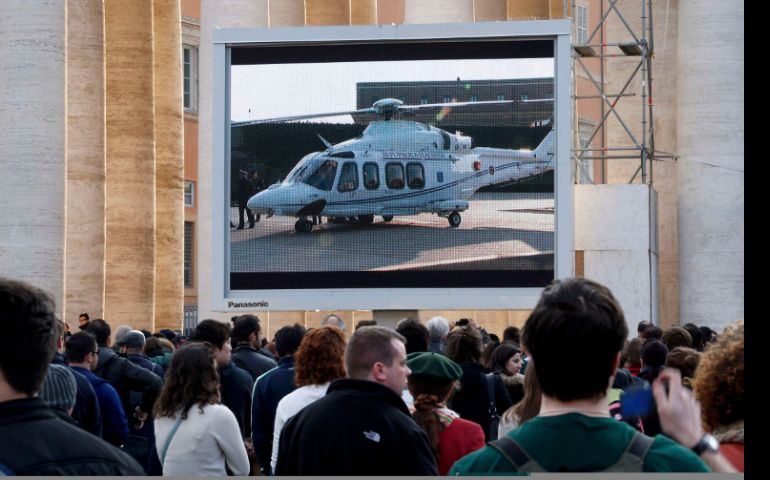 VATICAN CITY -- When Pope Benedict XVI officially left the Vatican in a helicopter a year ago today, becoming the first pontiff in 600 years to resign, many in his conservative fan base were aghast, even angry.

He has betrayed us, said those who thought Benedict’s papacy would be the final triumph of old-school Catholicism. He has undermined the papacy itself, they worried. Lightning even struck the cupola of St. Peter’s Basilica hours after Benedict departed, surely a bad omen.

Rumors that he was suffering from a terminal illness were taken as gospel truth. After all, what else could explain Benedict’s unorthodox decision to abandon the Throne of St. Peter?

Well, it turns out the emeritus pope is doing just fine, thank you. Yes, he is nearly 87, slightly stooped and walking with a cane. But his overall health is pretty good and his spirits — and his wit, say friends who see him — are as strong as ever.

“His memory is fresh and his eyes are very bright and joyous,” the Rev. Stephan Otto Horn, head of a close-knit circle of Benedict’s former theology students, said after meeting Benedict in June.

Indeed, Benedict receives a regular stream of visitors in a retrofitted Vatican monastery where he passes the days praying but also reading, playing the piano, and corresponding with old friends and intellectual foes, like the Swiss theologian Hans Kung.

Despite initially vowing to remain “hidden from the world,” Benedict made a surprise appearance Feb. 22 at St. Peter’s Basilica as Pope Francis installed his first batch of cardinals — the first time Benedict has appeared at a Vatican liturgy in a year. “When I saw him, I was startled,” said one of the new cardinals, Leopoldo Brenes Solorzano of Nicaragua.

Vatican officials say Benedict is likely to attend the dual canonizations of Pope John Paul II and Pope John XXIII in April. He was seen dedicating a statue with Francis in the Vatican gardens, visiting his older brother in a Rome hospital, and enjoying a piano concert in his honor by Fox News religion correspondent Lauren Green.

Benedict also made headlines last fall when he wrote a lengthy response to an Italian atheist who had critiqued his work, and allowed the letter to be published in a leading newspaper.

All told, it adds up to a gradual, if limited, re-emergence that may augur an unexpected second act for Benedict, though one whose ending is still being written — and maybe rewritten.

The drama is actually not that his greater visibility will renew concerns about diluting Francis’ standing or authority; that fear, often voiced in the days after Benedict stepped down, was a bit of a stretch. Francis himself is clearly not worried, and he periodically consults with his predecessor. “It’s like having a grandfather at home,” as Francis says.

Rather, it is the impact of Benedict’s intellectual legacy that is in play, and how, and whether, it will influence a church undergoing a transformative moment under Francis.

That legacy is embodied in the dozens of pieces that Benedict, formerly known as Joseph Ratzinger, wrote over a remarkable, and controversial, career — first as an expert advising German bishops at the Second Vatican Council in the 1960s, then as a cardinal who served for 23 years as the Vatican’s top doctrinal officer under John Paul; and finally as pope for eight years.

“His works will survive the centuries like those of Augustine and St. Thomas Aquinas,” Cardinal Christoph Schonborn of Vienna, another theology student of Ratzinger’s, said last year.

To advance that cause, Benedict’s writings are currently being compiled and edited into a multivolume set, and some speculate that one day there may be more to add. “I can’t imagine him being alive and not writing,” said the Rev. Joseph Fessio of Ignatius Press, the primary English language publisher of Benedict’s works.

Fessio, also a member of the “Ratzinger Schulerkreis,” or school circle, of former theology students that meets every year to discuss and promote Benedict’s ideas, said he was convinced Benedict would never publish anything while he is alive out of respect for Francis and the papal office. “But I suspect that when he dies there will be some posthumous works,” he said.

At this point, however, the struggle to shape Benedict’s legacy may be out of his hands and part of a larger tug of war over the direction of the current pontificate.

Catholic progressives, who had long seen Ratzinger as a foe of a more open and less conservative church, have highlighted Benedict’s powerful writings on social justice and the environment, noting how much they prefigured and bolster similar statements by Francis. Others lauded him for the radical step of resigning, in part because it served to downsize a papacy that they felt had grown too authoritarian under John Paul and then Benedict.

Conservatives, on the other hand, quickly recovered from the shock of Benedict’s surprising resignation to confront the shock of Francis’ enormous popularity. That popularity, they fear, is rooted in a view of Francis as a harbinger of change and comes at the expense of Benedict and the conservative tradition.

So they are making several counterarguments aimed at elevating Benedict’s reputation while at the same time tempering the acclaim for Francis:

“We are all seeing the impact of Pope Francis on the world, not only on the faithful in the church, but on the world; it is a huge impact, and this impact was also facilitated by Pope Benedict in his resignation,” Archbishop Georg Gaenswein, Benedict’s closest aide and a leading promoter of his boss’ legacy, said this month. “He opened up a possibility that until then was not there.”

In this view, Francis is really building Benedict’s church, as one commentator wrote, and Benedict in fact deserved Time magazine’s “Person of the Year” every bit as much as Francis, said another.

So what does Benedict himself make of all the maneuvering?

He is probably rather amused. Those who know him say that his penchant for sarcasm is as sharp as ever, and if he doesn’t agree with everything Francis is doing — Gaenswein himself admitted to some exasperation with the new pope’s populist ways — Benedict has told friends that “theologically he is very much in the same line with Pope Francis.”

Besides, Benedict seems as focused, as he always was, on the larger cultural and spiritual struggle to defend the faith. That’s what an Italian bishop who visited Benedict in early February found, as the retired pope spoke with keen interest about world events and what Benedict saw as “the increasingly virulent attacks” on the church.

“If there is no battle,” Benedict told his visitor, “there is no Christianity.”

The Catholic story, conservative vs. progressive