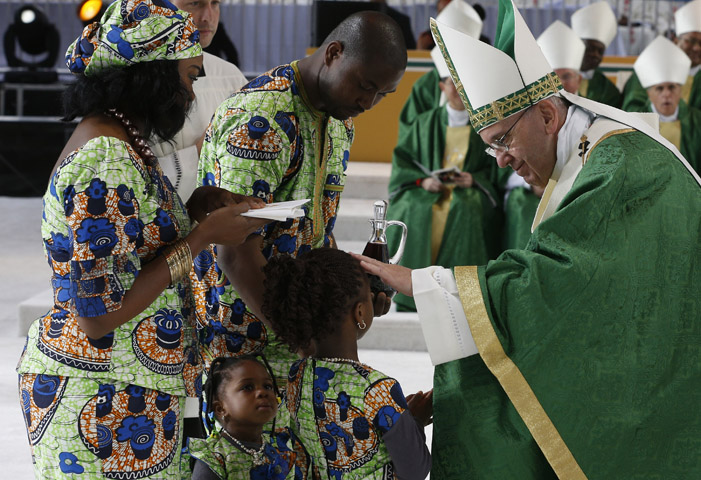 Pope Francis blesses a girl as her family presents offertory gifts during the closing Mass of the World Meeting of Families along Benjamin Franklin Parkway in Philadelphia Sept. 27. (CNS/Paul Haring)

The 14th general assembly of the Synod of Bishops opens in Rome Oct. 4. It will bring together some 300 cardinals and bishops, along with a few dozen lay and religious advisers and consultors to discuss pressing issues around family life.

The synod -- its official theme is "The Vocation and Mission of the Family in the Church and Contemporary World" -- runs until Oct. 25 and is the culmination of more than two years of preparation that included among the widest consultations the Vatican has ever undertaken.

In the fall of 2013 and early 2015, the Vatican distributed questionnaires about family life and church teaching on the family to the world's bishops with the instructions that the questionnaires be used as tools to consult parishes and deaneries.

Although how individual bishops consulted with their people varied widely, the Vatican did receive thousands of responses to questions like:

The Vatican's call for consultation and the fact that many bishops and some national bishops' conferences did consult the faithful openly and widely, coupled with the intimate nature of the subjects under discussion, caused great interest and wide anticipation.

Part of the preparation for this year's ordinary synod was an extraordinary synod Francis convened last October under the theme "Pastoral Challenges to the Family in the Context of Evangelization."

Opening last year's synod, Francis challenged the delegates, most of whom were presidents of national bishops' conferences (this year's general synod includes a wider representation), to speak boldly and without fear.

The discussions were held behind closed doors, but according to Vatican reports and delegates in the synod hall, the topics included divorced and remarried Catholics, people in "irregular" unions and their children, the church's outreach to "people of a same-sex attraction," as well as families in poverty and conflict situations.

The discussions in the synod hall did seem wide-ranging and at times heated. An NCR headline from last year read "Reactions to the family synod range from concern to elation."

Francis seemed to have achieved the bold talk he sought. In his address closing the meeting, he told the delegates not to worry about the debates: "Many commenters … have imagined seeing a church in dispute where one part is against the other, doubting even the Holy Spirit, the true promoter and guarantor of unity and harmony in the church."

They must find a middle path between doctrine and reality, Francis said, telling the delegates to avoid the temptation to become either a "hostile rigorist" concerned only with enforcing church doctrine or a "destructive do-gooder" who advocates "false mercy" instead of truth-telling.

Francis seemed to pick up on similar themes at the open-air Mass he celebrated Sept. 27 to close the World Meeting of Families and end his visit to the United States. He exhorted a million people on the Benjamin Franklin Parkway in downtown Philadelphia and millions more watching on television and live-streaming to be unafraid of trying new things, even if they seem to threaten long-practiced traditions or existing church structures.

In his homily at that Mass, Francis said that Jesus' disciples were afraid of new things -- but that Jesus broke down all barriers to allow the Spirit to do its work.

"The temptation to be scandalized by the freedom of God, who sends rain on the righteous and the unrighteous alike, bypassing bureaucracy, officialdom and inner circles, threatens the authenticity of faith. Hence it must be vigorously rejected," he said.

These remarks led some to suggest that even as the U.S. trip was concluding, Francis was already thinking ahead to the Synod of Bishops.

"The persistent thread of openness -- to change in the church and to people who may think differently or disagree -- will also be the theme, and flashpoint, of a pivotal Vatican summit of leading bishops that Francis is set to convene Oct. 4 to discuss concrete ways to welcome families that may not conform to the ideal of the catechism," David Gibson of Religion News Service wrote.

As Francis calls for dialogue and a middle way, various factions in the church have spent the time from the close of the last synod until the opening of the 2015 synod to hone their talking points and solidify their positions.

Fault lines are emerging mostly based on the cultural and regional differences of the synod participants. This has been showcased with the publication of several books trying to set the tone in advance of the discussions.

One example is a book published last month by Ignatius Press, a San Francisco-based firm run by Jesuit Fr. Joseph Fessio that is the primary English-language publisher of the writings of Pope Benedict XVI. Eleven Cardinals Speak on Marriage and the Family: Essays from a Pastoral Viewpoint staunchly urges the 2015 synod to make no changes in the church's pastoral practices.

Writing in Eleven Cardinals Speak, Dutch Cardinal Willem Jacobus Eijk of Utrecht called civil remarriage by a couple that has not received annulments of any first marriages "a form of structured and institutionalized adultery." Eijk will be a delegate at the synod this month.

In another book, God or Nothing: A Conversation on Faith With Nicolas Diat, Guinean Cardinal Robert Sarah is unequivocal: "The Church in Africa is staunchly opposed to any rebellion against the teaching of Jesus and of the Magisterium."

Sarah will attend the synod as prefect of the Vatican's Congregation for Divine Worship and the Discipline of the Sacraments.

Other African Catholic leaders are concerned that discussions at the synod will focus solely on a Western agenda and ignore a multitude of pressing issues facing millions living throughout Africa.

Bishop Emanuel Barbara of Malindi, Kenya, said in July that Africans face many different challenges than Europeans. "If we want to have respect to our African Christian families, we need to work seriously on an African Christian theology of marriage," he said. "It's not enough to apply other models that have been there for centuries."

Barbara is a substitute for the synod; he will participate if another Kenyan bishop-delegate cannot.

Meanwhile, a diverse global network of Catholic women launched an expansive and compelling collection of writings before the opening of October's Synod of Bishops, pointedly calling on the male delegates to include their half of humanity and its experience in the synod's discussions.

In 40 short essays mixing the sociological, theological and sometimes deeply personal, the writers raise a number of weighty concerns for the synod on family life. Catholic Women Speak: Bringing Our Gifts to the Table is published in the U.S. by Paulist Press.

In one essay, "The Structure of the Church and Catholic Families," Catherine Cavanagh asks how the structure of the church's male-led hierarchical system sets an example for families around the world.

"What is the impact on the family of a church where Sunday after Sunday only men preach?" asks Cavanagh, a candidate in the Doctor of Ministry program at Regis College, University of Toronto. "How does it affect the family to be told that only men can be the imago Christi?"

The teaching that only men can image Christ as a priest, Cavanagh says, teaches families that "Dad must be more important than mom."

"In general, God must think boys are more important than girls," Cavanagh continues. "Sure, Mary is awesome, but she is not God. Christ is God and that makes God male and priests male (forget our teaching that all are created in the image of God). So males come first, and females come second."

At the heart of many of their concerns, however, is their own exclusion from the synod process. While Francis has appointed 30 women to attend the synod as auditors or consultants, making contributions to the discussions, only the 279 male members of the meetings can vote.

Pressing that point in one of the essays is Italian historian Lucetta Scaraffia, who titles her contribution "Breathing With Only One Lung: Where Are the Women's Voices in the Synods?" Scaraffia is one of the women appointed as auditors.

"The absence of women's perspectives at times of reflection on these issues is not only an act of disdain toward women, who make up more than half of religious and believers, it is also an impoverishment of Catholic life," writes Scaraffia, one of 43 women writing for the essay collection.

"If the church's voice is to be heard, women must share the work of proclamation," says Scaraffia, who also edits a monthly edition dedicated to women's issues for the Vatican newspaper L'Osservatore Romano.