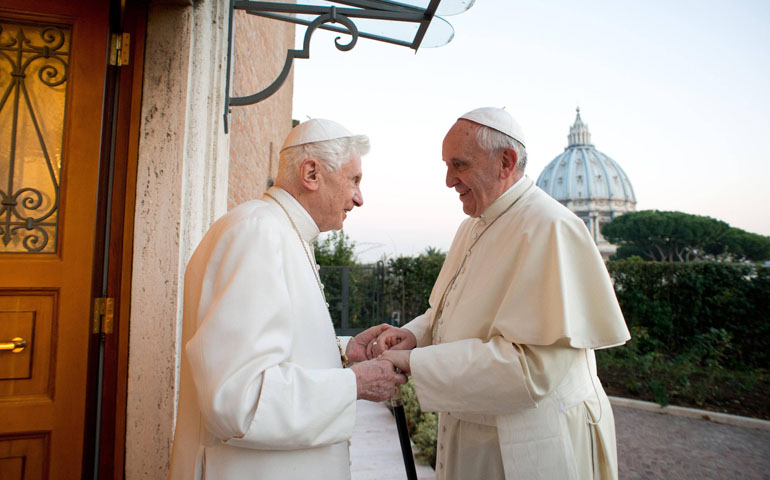 When Pope Benedict XVI announced on Feb. 11, 2013, that he would become the first pope in nearly 600 years to resign, speculation was as varied as it was excited about the long-term consequences of his historic act. But one common line of thought held that, for better or worse, his decision might leave the papacy a less exalted and powerful office, bringing the supreme pontiff closer to the level of other bishops, clergy and faithful.

Might the presence of two living popes inside the Vatican sow confusion over where governing authority actually lay, or, at least, dilute the prestige of the unique role of vicar of Christ? Might the precedent of resignation make it easier to drive a future pope from office, thus introducing a new kind of political pressure into the leadership of the church?

The background of Pope Benedict's decision added to the sense of crisis. Although the 85-year-old pope said he was stepping down due to deteriorating "strength of mind and body," it was easy to believe that a year of scandal and controversy -- over leaked correspondence documenting corruption and incompetence in the Vatican -- had helped convince him he was "no longer suited to an adequate exercise of the Petrine ministry."

From that assumption, it was a small stretch to wonder whether the demands of the 21st-century papacy -- in terms of communications, management and travel -- had grown too heavy for any man, especially one as old as most popes.

When the newly elected Pope Francis stepped out on the loggia in front of St. Peter's Basilica on the evening of March 13, 2013, his words and gestures seemed to encourage predictions of a downscaled papacy. The new pontiff broke with usual practice by asking for the people's blessing before he gave them his own, and referred to himself simply as the bishop of Rome.

Was Pope Francis signaling his intention to play a less commanding role than his predecessors, demoting himself to the status of first among episcopal equals, in a move toward some sort of democratization of the church?

The prospect of a weakened papacy may have seemed plausible in the wake of Pope Benedict's announcement, but over the subsequent year, the world has watched his successor assert his leadership in ways that have made the office only stronger.

With his informal charisma, plain speaking and spontaneous style, Pope Francis quickly garnered colossal popularity, whether measured by record turnouts at papal events or by the intensive and almost entirely favorable coverage by secular media.

Within the Vatican, the pope has not hesitated to replace officials in key positions and launch a process leading to a major overhaul of the church's central administration, the Roman Curia.

While Pope Francis has stressed the importance of collegiality, or consultation with his brother bishops, his institutional application of that principle has so far taken the form of the Council of Cardinals, an eight-member panel he named to advise him on reform of the Vatican bureaucracy and governance of the universal church.

By streamlining the process through which recommendations from bishops reach the pope, the council has only made it easier for him to make executive decisions in his own name, such as the establishment of a special commission on sex abuse, which he approved in December less than a day after hearing the proposal.

Pope Francis has spoken of the importance of the Synod of Bishops, but his most eloquent statement on its role may be his apostolic exhortation, Evangelii Gaudium, published in November in response to the October 2012 synod on the new evangelization. Previous popes have typically based such documents on a draft by synod officials, which synthesized recommendations by bishops at the gathering. Pope Francis scrapped the draft provided to him and wrote his own document, in his distinctive voice and focusing on his particular concerns.

Even the presence of the retired pope, living quietly in his successor's shadow within the Vatican walls, has proven not a hindrance to Pope Francis but instead a major asset. Pope Francis has told reporters that he consults with his predecessor as he would with a "wise grandfather."

No less importantly from the point of view of the faithful, the two men's affectionate relationship has reinforced a sense of fundamental continuity between their pontificates, despite their striking stylistic differences when it comes to evangelization and celebration of the liturgy. Such reassurance is invaluable, given the pope's essential role in preserving church unity.

For all of Pope Francis' virtues as a leader, the strength of the office he holds today ultimately owes even more to his predecessor, who affirmed its importance in the very act of resigning. No words or gestures could have demonstrated more powerfully that the pope is not a mere figurehead, but truly the leader of 1.2 billion people around the world, than Pope Benedict's admission that a stronger man was needed to fill the role.