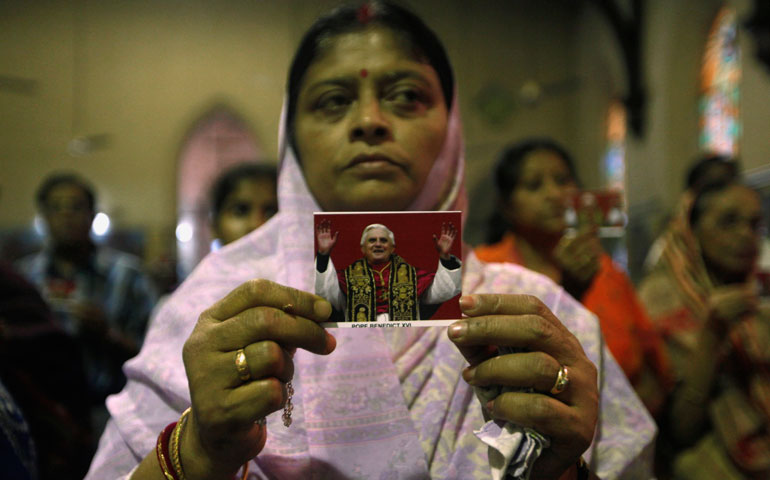 A woman holds a portrait of Pope Benedict XVI during a Mass in his honor in Kolkata, India, Feb. 26. (CNS/Reuters/Rupak De Chowdhuri)

As Nicholas Lash has expounded on many occasions, in John Henry Newman's 1877 Preface to the third edition of the Via Media of the Anglican church, Newman plays upon the three offices of the church -- the priestly, the prophetic and the kingly -- as images for three necessarily interrelated dimensions of and responsibilities within the church's life: the devotional and spiritual, the teaching and intellectual, and the regulative and governmental.

For all this distinctiveness of particular expression, however, Newman views each of these dimensions as being bound in necessary relationship with each other, as being accountable to each other and so mutually correcting their own respective potential distortions (of piety into superstition, of the intellectual into rationalism, and of the regulative into authoritarianism).

With this, the three fundamental dimensions -- of the life of faith, of critical theology, and of governance and authority -- themselves need similarly to be held in necessary balance.

Pope Benedict XVI has certainly shown in his own person how these three fundamental dimensions are in necessary relationship.

He is at once a man of deep and transparent faith, many of whose reforms (whatever one might personally make of them) have been linked to the devotional life of the church; a great theological contributor whose work, whether official or "private," is rooted in the prayed tradition of the church and intentionally in service of the church's life and governance; and the supreme pontiff and governor of the church, who has left the office precisely in order to facilitate the effective governance of the church into the future (thus taking attention off the symbolic and ceremonial aspects of the role) and to turn to a life of prayer and reflection.

The fundamental need now within Catholicism, touching many levels of Catholic life and structure, is to grow institutionally and structurally into the necessarily interrelated three-fold form of ecclesial existence that Newman outlines and that Benedict himself manifested.

It might be regarded as a call to a more radical and fulfilled communion ecclesiology: one that at every level of Catholic life (whether pope in relation to the college of bishops; or bishops in relation to dioceses; or priests in relation to congregations) finds the confidence to move with integrity from a habitual and structurally embedded default of unilateral, top-down, authoritarian modes of decision-making and toward appropriate modes of mutual -- even if still necessarily asymmetric -- accountability and genuinely shared decision-making. At each level this development would need to preserve the appropriate executive role of pope relative to college, of bishop relative to diocese, and of parish priest relative to parish, while resituating this within habits, practices, processes, procedures and structures of appropriate mutual accountability and genuinely shared decision-making.

This generic issue runs through every level of Catholic life, representing our most profound area of familial dysfunction and the dimension of Catholicity in which we are called most urgently to integral growth and development for sake of the greater flourishing and effectiveness of Catholic life and witness.

Alongside and underpinning this emphasis on the need for modes and structures of mutual accountability and of shared decision-making -- which might sound merely institutional and structural but which is already profoundly theological, as the allusion to the full demands of a communion ecclesiology suggests -- there needs also to be a profound theological deepening of our understanding of Catholic Christian vocation and of the place of order and ordained ministry within this.

I suggest that a re-appropriation of the category of sacramentality provides the means of doing this.

The vocation of each and every baptized is to be uniquely sacramental of the purposes of God in creating and to bear specific witness to this in ways that have real priestly, prophetic and kingly dimensions, as each is variously called to show back to the world what the world's deepest calling is.

In turn, the vocation of the ordained (with diaconal, presbyteral and episcopal ordinations each having specific but nonexclusive respective orientations to the prophetic, priestly and kingly offices) is to be variously sacramental of the ministry of Christ in the church, to perform and witness to in authenticated, public ways the ministry of Christ that is already authentic to the church and so to show back to the church -- and thereby the world -- what the church most deeply is called to be.

So may Benedict's personal commitment to seeking after the appropriate integration of the priestly, the prophetic and the kingly -- the lived faith, the teaching and witness, and the governance -- dimensions of the church's life cascade into a process of deepened integral reform and of more fully realized structures and habits for living, thinking, deciding and acting in and out of real communion in the church.

May his abdication from the papacy in order to serve the healthy exercise of the office and effective governance of the church inspire us more widely to discern that which we as a communion need to lay down; that which we need to prioritize; and the changes of life and structure to which we are being called.

May it give us courage to become more fully, more freely, more fluently Catholic.

[Paul D. Murray, professor of systematic theology, directs the Centre for Catholic Studies at England's Durham University. He is also president of the Catholic Theological Society of Great Britain.]

A version of this story appeared in the March 15-28, 2013 print issue under the headline: The unfinished business of communion ecclesiology.