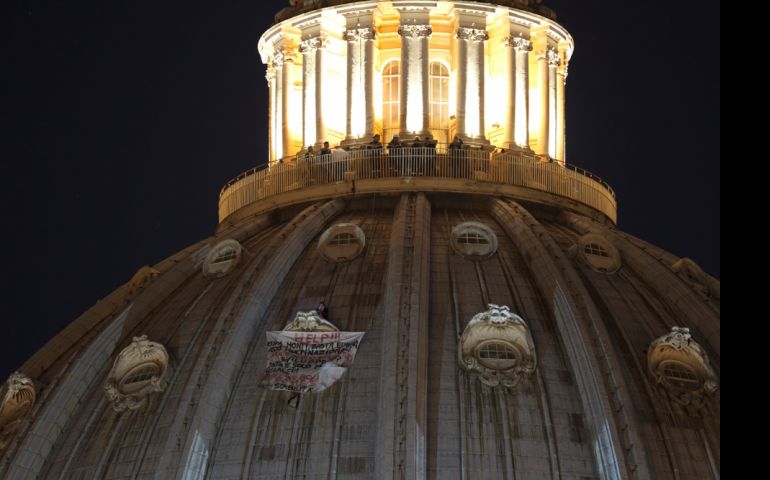 Firemen stand above a protester perched atop a window on the dome of St. Peter's Basilica on Tuesday at the Vatican. (CNS/Paul Haring)

Vatican City — A 49-year-old Italian man protesting the economic policies of Italy and Europe scaled a fence on top of the dome of St. Peter's Basilica on Tuesday and remained perched above a window for 28 hours, even during Pope Benedict XVI's weekly general audience in the square below.

With the help of two Vatican firefighters and the rope he had tied around himself, the protester, Marcello Di Finizio, climbed back up to the public walkway on top of the dome about 8 p.m. local time Wednesday. He was escorted to a nearby Italian police station for what he told The Associated Press were "formalities."

While many in the crowd of 20,000 people attending Pope Benedict's general audience that morning noticed a banner hanging from the dome, it was impossible to read from the square and almost no one seemed to know a man was up there.

Pope Benedict did not mention Di Finizio during the audience.

Di Finizio, who had scaled the fence on the dome in July as well, runs a beachfront business in northern Italy, renting out umbrellas and lounge chairs. He has been protesting Italy's plan, in compliance with European Union directives, to auction off licenses to operate such businesses on public beaches.

Speaking from the dome, he told CNS: "I'm here to ask for help. Our government, our state, doesn't exist. Sectors of the economy, the beach sector, have been paralyzed for years by government policies.

"I ask for political asylum from the Vatican," he said. "The pope is the highest ethical and moral authority in this country, or at least he should be -- let's hope he still is."

Di Finizio, who was wearing an Italian flag around his neck, said he would not come down until government officials and labor union officials met to address the serious economic issues facing Italians who work in the tourism sector.

The protester said he felt forced to take his protest public in a highly visible fashion.

"I want to live; I like living," he said, but "if they want to kill me, let them do it in front of millions of people."

Di Finizio implied he could be willing to jump from the dome. When others are driven to such desperate measures, he said, "these are not suicides, these are homicides."

When a CNS reporter suggested that his message had been heard and he could come down, Di Finizio laughed and said: "In your country, maybe that would work, but we're in Italy. Here they will slap me on the back, kick me in the rear and not listen anymore."

Then Di Finizio made a request, "Please ask the pope to send up an electrical cable so that my phone battery doesn't go dead and I can keep talking to (all of) you."

Vatican firefighters and police officers remained on the public walkway around the top of St. Peter's dome throughout the night and into Wednesday as Di Finizio's protest continued.

Di Finizio had joined a group of tourists going to the top of St. Peter's Basilica at about 5 p.m. Rome time Tuesday. Security cameras showed him climbing over the 4-foot-high fence, tying a rope around himself and lowering himself down to a large decorative overhang above one of the dome's windows.

He also managed to unfurl and tie down a large banner to the dome that said "Help!" and called for an end to policies that were "butchering society."