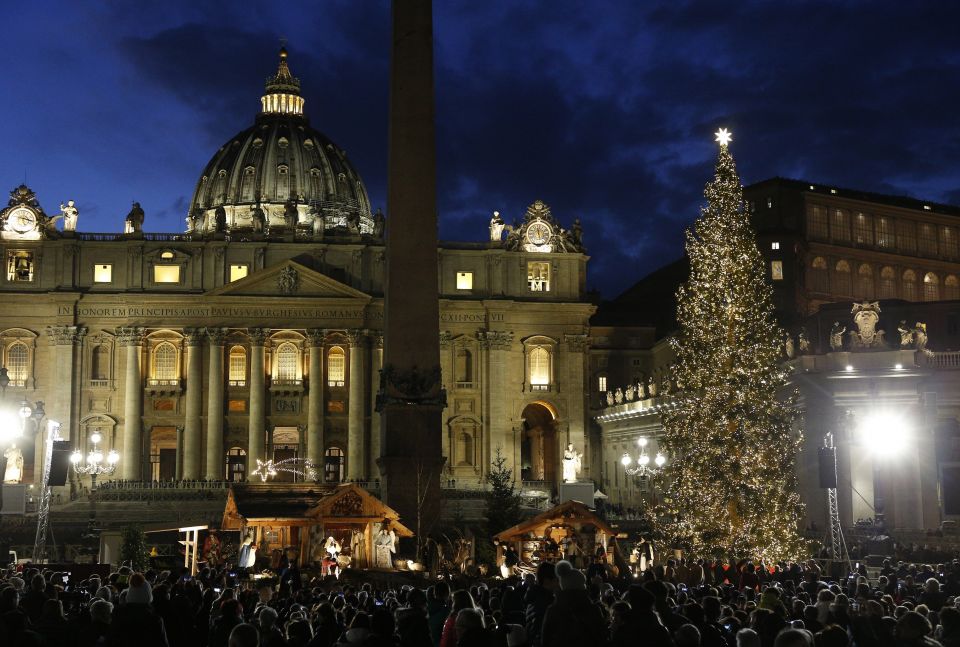 The Christmas tree sparkles after a lighting ceremony in St. Peter's Square at the Vatican in this Dec. 5, 2019, file photo. (CNS photo/Paul Haring)

Vatican City — The Nativity scene in St. Peter's Square this year will have a distinctly Indigenous, Andean look with the centerpiece being a "Hilipuska" baby Jesus, that is, one wrapped in a blanket bound with a long cord known as a "chumpi."

The super-swaddled baby is typical of the Andean highlands, particularly in Peru's Huancavelica region, which is home to the five artists who created the 30-piece Nativity scene.

In a statement released Oct. 28, the Vatican City State governing office said the scene was chosen, in part, to mark the 200th anniversary of Peru's independence.

"The Three Kings will have saddlebags or sacks containing foods characteristic of Huancavelica, such as potatoes, quinoa, kiwicha and cañihua, and will be accompanied by llamas carrying a Peruvian flag on their backs," the Vatican said. "In the crèche, there also will be statues of different animals belonging to the local fauna such as: alpacas, vicuñas, sheep, vizcachas, flamingoes and the Andean condor," which is the national symbol of Peru.

The crèche will sit under a spruce tree, which is expected to be about 90 feet tall. The tree will come from a sustainably managed forest in the Dolomite mountains of Italy's Trentino-South Tyrol region. The round wooden ornaments also will come from Trentino, the Vatican said.

The tree will be lighted and the Nativity scene will be unveiled the evening of Dec. 10, the Vatican said. They will remain in the square through Jan. 9, the feast of the Baptism of the Lord.

The Vatican also said that a group of young adults from the parish of St. Bartholomew in Gallio in the Diocese of Padova will provide a Nativity scene for the stage in the Paul VI audience hall at the Vatican.