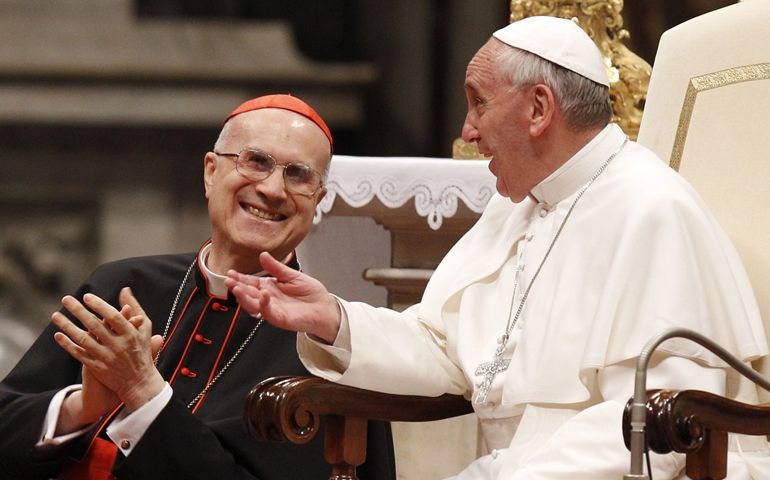 Cardinal Tarcisio Bertone reacts as Pope Francis makes a comment during an audience with pilgrims from the Diocese of Bergamo, Italy, June 3, 2013, in St. Peter's Basilica at the Vatican. (CNS/Paul Haring)

Vatican City — The Vatican has opened an investigation into the financing of the restoration of former Secretary of State Cardinal Tarcisio Bertone’s large apartment, targeting two former executives at a children’s hospital owned by the city-state for possible redirection of funds towards the project.

Gregory Burke, the deputy director of the Vatican press office, told reporters in a short briefing Thursday that the cardinal himself was not under investigation but that two former officials of the Bambino Gesu Hospital in Rome are.

Both Giuseppe Profiti, a former president of the hospital, and Massimo Spina, a former treasurer, are subject to an ongoing investigation, Burke said.

Thursday’s confirmation follows reports in Italian press that the two executives were being investigated for the use of some 400,000 Euro towards restoration of Bertone’s apartment, based on reporting done by journalist Emiliano Fittipaldi in his November 2015 book Avarizia (“Avarice”).

While Bertone has not admitted any guilt in the matter, he made a large donation of 150,000 Euro to the hospital last December after the book’s publishing in a bid to make amends.

The cardinal, who essentially served as the Vatican’s number two official after the pope from 2006 through October 2013, has been criticized for combining two previous apartments inside the Vatican into one reportedly 6,500 square foot residence.

Bertone originally said he had gotten Pope Francis’ backing for the project, saying in April 2014 that he had received a call from the pontiff after an initial round of reporting on the new residence and that Francis expressed “his sympathy and his disappointment for the attacks against me.”

"The apartment is spacious, as is normal for the residences in the ancient palaces of the Vatican, and dutifully restored (at my expense)," Bertone wrote then in a posting on the website of the Italian archdiocese of Genoa, which the cardinal led from 2002-06.

"I may temporarily use and after me it will benefit someone else," he continued. "In the words of the Pope Saint John XXIII, 'I do not stop to pick up the stones that are thrown at me.'"

Bertone, aged 81, does not currently hold any significant office at the Vatican. He served as the secretary of state under Pope Benedict XVI and for the first few months of Francis’ pontificate, before being replaced by Italian Cardinal Pietro Parolin.

Fittipaldi is one of two Italian journalists currently the subject of a Vatican trial for publishing confidential documents. The trial, which is ongoing, has been criticized by several international journalists’ associations as inhibiting the free press.

The Bambino Gesu is a children’s hospital owned by the Vatican and located in Rome just a short walk from the city-state. It is noted for its care and treats children from throughout Italy and Europe.

Humanized Francis speaks as a leader whose movement is falling apart

Fraternity of St. Peter can continue with pre-Vatican II liturgies