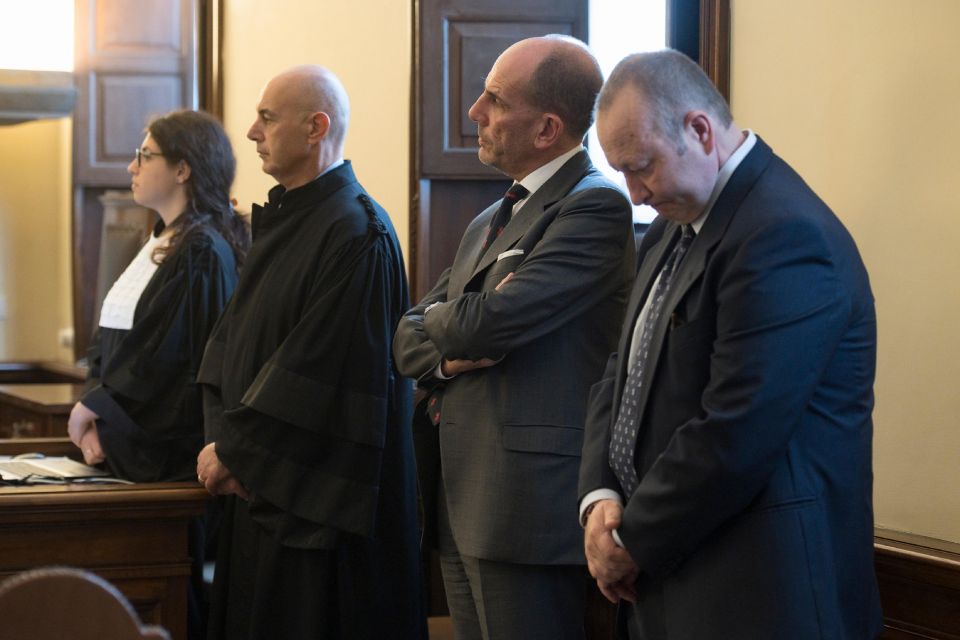 Giuseppe Profiti, second from right, former president of Bambino Gesu hospital in Rome, and Massimo Spina, right, former treasurer of the hospital, are pictured during their sentencing at the Vatican court Oct. 14, 2017. Profiti was found guilty of illicit appropriation and use of funds belonging to the Bambino Gesu Foundation. He was given a suspended sentence of one year in jail and a 5,000 Euro fine. Spina was absolved of the charges. (CNS/L'Osservatore Romano)

Vatican City — The Vatican's financial watchdog agency has reported continued progress in oversight, reporting and cooperation in its efforts to prevent suspected money laundering and the financing of terrorism.

In its annual report for 2017, the Financial Intelligence Authority confirmed a "robust reporting system and an effective application of the regulatory framework of the Holy See and the Vatican City State."

The agency, which oversees transactions made through the Vatican bank, also continued a "pro-active approach to cooperate and exchange information with its foreign counterparts to fight illicit financial activities," it said in its report, released to the public April 27.

However, as the agency continues to hand over reports of suspicious activity to the required authorities, very few cases have led to indictments and prosecutions by the office of the promoter of justice at the Vatican City State's tribunal.

Of reports it has sent to the Vatican tribunal over the years, there was one "successful prosecution of serious criminal offenses" in 2017, it said, referring to the trial of Giuseppe Profiti, the former president of the Vatican-owned pediatric hospital.

Originally charged with embezzlement, Profiti was found guilty of abuse of office for using donations belonging to the hospital's foundation to refurbish a Vatican-owned apartment used by Cardinal Tarcisio Bertone, former Vatican secretary of state. Profiti was sentenced to one year in jail and fined 5,000 ($5,900) euros on the reduced charge, but the sentence was suspended.

The ongoing cooperation and exchange of financial intelligence with foreign countries, the report said, also led to the arrest of an unnamed subject in his or her home country, where he or she had already been indicted for non-financial crimes.