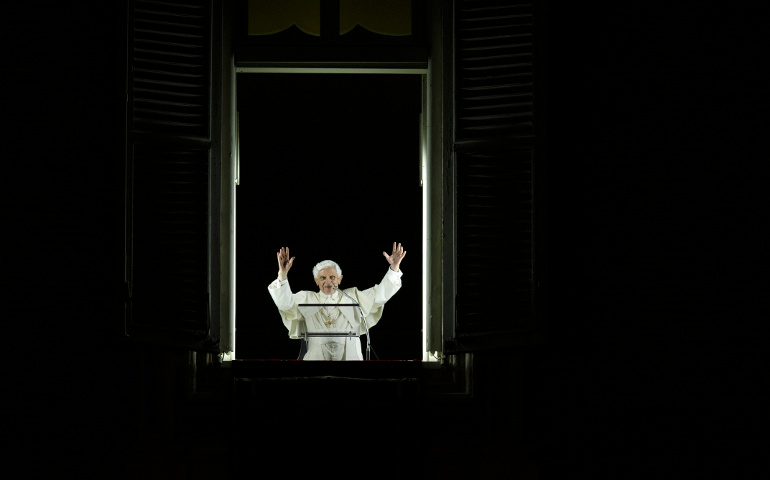 Pope Benedict XVI greets pilgrims from the window of his apartment after briefly addressing a candlelit vigil Thursday in St. Peter's Square at the Vatican to mark the 50th anniversary of the opening of the Second Vatican Council. (CNS/Paul Haring)

The Second Vatican Council's call for "renewal" did not mark a break with tradition or a watering down of the faith, but reflected Christianity's lasting vitality and God's eternal presence, Pope Benedict XVI said.

Christianity is always young and in "perpetual bloom," he said during an audience Friday with 15 bishops who participated in Vatican II between 1962-65. The private audience also included the patriarchs and archbishops of the Eastern Catholic churches and presidents of the world's bishops' conferences, who were attending the Synod of Bishops on the new evangelization.

Pope Benedict fondly recalled the council, saying it was a time that was "so vivacious, rich and fruitful."

He praised Blessed John XXIII's usage of the term "aggiornamento" or "renewal" for the church, even though, he said, it's still a topic of heated and endless debate.

"But I am convinced that the insight Blessed John XXIII epitomized with this word was and still is accurate," he said.

"Christianity must never be seen as something from the past, nor lived with one's gaze always looking back, because Jesus is yesterday, today and for all eternity," Pope Benedict said.

"This 'renewal' does not mean a break with tradition, rather it expresses a lasting vitality," he said.

Renewal doesn't mean watering down the faith, lowering it to fit modern fads or trends, or fashioning it to fit public opinion or one's own desires, "rather it's the contrary," he said.

Vatican II taught the church that it always must speak to the people "of today," he said. However, there is no easy way to do it; it has to be done by people whose lives are firmly rooted in God and who live their faith "with purity," he said.

Remembering the past is important, he said, but the best way to honor Vatican II is to return to the living Gospel and bring Christ's presence and love to today's world, he said.

During an evening candlelight vigil Thursday, reminiscent of one held exactly 50 years earlier, Pope Benedict warned of sin and imperfection within the church.

Recalling an event marking the opening of the Second Vatican Council, Catholic Action of Italy and the Diocese of Rome led a prayerful candlelight procession along the wide boulevard of Via della Conciliazione to St. Peter's Square, where people holding large candles assembled to form the shape of a large cross lighting up the darkness.

The event reenacted a similar gathering of faithful Oct. 11, 1962, after which Blessed John XXIII came to his studio window and gave his impromptu "Moonlight Speech" in which he reassured the world that "the pope is with us, especially in times of sadness and bitterness."

From his apartment window, Pope Benedict spoke off-the-cuff to the nearly 10,000 people gathered in the square and recalled how he had been at that candlelight procession 50 years earlier, looking up at the same window from where he now stood.

It was a time of great joy and enthusiasm, he said, because "we were sure that a new springtime of the church, a new Pentecost" would come with a new emphasis on the liberating grace of the Gospel.

"Even today we are happy," but it's a joy that's more "restrained" and "humble," he said.

The past 50 years have shown that despite the joy and optimism for the future, "there are always weeds, too, in the field of the Lord. We have seen that you can find bad fish in Peter's net," he said.

Original sin can be manifested everywhere, even in the very structures of the church, he said."We have seen that human fragility is also present in the church, that the vessel of the church is also navigating with strong headwinds, in storms that threaten the vessel and sometimes we have thought, 'The Lord is asleep and has forgotten us,'" the pope said.

However, that is only part of what the church has experienced the past half-century, he said, underlining that there have been "new experiences of the Lord's presence, of his goodness and strength."

"Even today, in his humble way, the Lord is present and warms our hearts, shows life, creates charisms of goodness and charity that light up the world and are, for us, a guarantee of God's goodness," Pope Benedict said.

"We can be happy even today" because Christ is alive and well, and his goodness never dies, he said.

Pope Benedict repeated a phrase from Pope John's "unforgettable" speech that night, saying, to applause and cheers, "Go home and give your children a kiss and say it's from the pope."