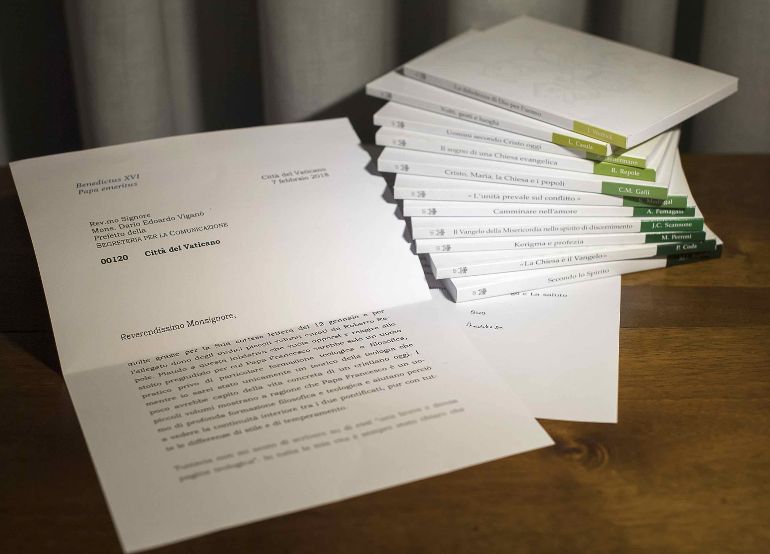 An image showing a letter from retired Pope Benedict XVI to Msgr. Dario Vigano, prefect of the Vatican Secretariat for Communication, is seen in this photo released by the Vatican March 12. On March 14 the Vatican admitted that it blurred the last lines in the image of the letter. (CNS photo/Vatican Media)

Rome — The Vatican has released the full text of a letter written by retired Pope Benedict XVI about Pope Francis, days after admitting that an earlier photo sent to the media of the document was altered to obscure a portion of its contents.

While a March 17 statement from the Secretariat for Communication says the original choice to withhold some of the letter's content was made for reasons of privacy, the full text makes clear that Benedict had expressed concern about a new book series examining Francis' theology.

At the end of the letter, previously withheld from the media, the retired pope says he wants to note his "surprise" that one of 11 volumes in "The Theology of Pope Francis" series had been authored by noted German theologian Fr. Peter Hünermann.

Benedict claims that during his 2005-13 papacy Hünermann "led anti-papal initiatives." He also says criticisms the theologian made of Pope John Paul II's 1993 encyclical Veritatis Splendor "attacked in a virulent way the magisterial authority of the Pope especially on questions of moral theology."

Revelation of Benedict's concern about the theology series comes following days of speculation about what the former pontiff had written about his successor.

Msgr. Dario Vigano, prefect of the Vatican secretariat, first announced at a March 12 Rome launch for the theology series that Benedict had written a letter about Francis at Vigano's request.

But images of the letter subsequently sent by the Vatican to the media obscured two lines at the bottom of the letter's first page. And the second page of the letter was covered by copies of the books in the theology series, leaving seen only Benedict's small signature.

While Vigano read aloud from the letter at the launch, he did not read the portion criticizing the choice of Hünermann.

The Secretariat said in its statement March 17 that "the portion that was considered appropriate and relative to the initiative was read aloud ... leaving aside some notes related to the contributors to the series."

"The choice was motivated by confidentiality and not by any intent of censorship," the statement continues. "To dispel any doubt, it was decided to make the letter known in its entirety."

Earlier in the letter, as made known to the media March 12, Benedict praises the publishing of the theology series, calling the initiative "helpful to see the interior continuity" between his and Francis' papacies, "even with all the differences in style and temperament."

Hünermann, who wrote the book in the series on Francis' anthropology, is a retired professor of dogmatic theology at Germany's University of Tübingen.

The days-long saga about Benedict's letter has led many analysts to question why Vigano decided to involve the former pontiff in the book project.

"Joseph Ratzinger has always said what he thought very frankly," tweeted Massimo Faggioli, an Italian church historian and theologian at Villanova University. "The problem was asking him to say it when there was no need ... to do so."

Francis, Trump to meet -- with fireworks or no drama?