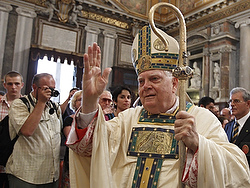 Cardinal Bernard F. Law blesses people after celebrating Mass at the Basilica of St. Mary Major to mark the feast of the church's dedication Aug. 5, 2010, in Rome. (CNS photo/Paul Haring)

VATICAN CITY -- Cardinal Bernard F. Law, former archbishop of Boston, has been replaced as archpriest of the Rome Basilica of St. Mary Major, the Vatican announced.

Cardinal Law turned 80 Nov. 4, at which time he stopped being a member of Roman Curia agencies.

Pope John Paul II appointed Cardinal Law to the position in May 2004, about two years after he resigned as Boston's archbishop amid criticism of his handling of clerical sexual abuse cases in the archdiocese.

Since his appointment to the position in Rome, Cardinal Law has kept a relatively low profile. One of his regular duties as archpriest is to celebrate Mass on Aug. 5, a special service marking the date in 358 when Mary caused snow to fall on the spot of the basilica to indicate where she wanted a church built in her honor.

It is a popular church event, marked by white flower petals being released from the ceiling of the basilica.

For the past few years, groups representing victims of priestly sexual abuse have asked Pope Benedict to bar Cardinal Law from celebrating such a high-visibility Mass.