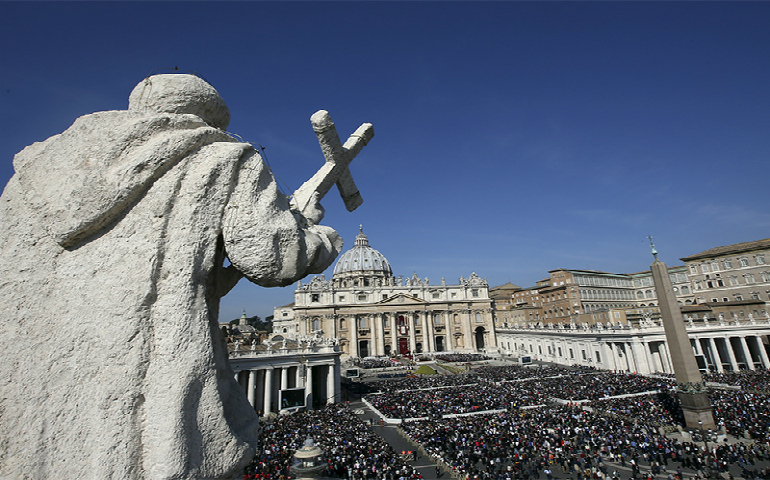 A general view is seen of Pope Francis leading the Easter Mass in St. Peter's Square at the Vatican on March 27, 2016. (Reuters/Alessandro Bianchi)

Catholic activist Social Service Sr. Simone Campbell has suggested that senior clergy at the Vatican are more preoccupied with power than confronting issues that affect the faithful, like clerical sexual abuse.

The U.S. nun, leader of the "Nuns on the Bus" campaign that has toured America during recent election cycles, spoke frankly in an interview ahead of a conference being held at the Vatican on March 8 to celebrate women's contributions to peace.

"The institution and the structure is frightened of change," Campbell told Religion News Service. "These men worry more about the form and the institution than about real people."

Referring to Marie Collins, who last week resigned from the panel appointed by Pope Francis to look into allegations of past Vatican obstruction of child sex abuse investigations, Campbell said: "Blocked by men. Isn't this the real problem within the church?"

"The effort to keep the church from stopping this sort of thing is shocking," she added. "It is about male power and male image, not people's stories. The real trouble is they have defined their power as spiritual leadership and they don't have a clue about spiritual life."

Campbell said she was shocked, and also moved, to have been included on the guest list for the Vatican conference.

She was among the American nuns targeted in the controversial investigation of the Leadership Conference of Women Religious that was authorized in 2012 under then-Pope Benedict XVI. The Vatican investigators charged that the American sisters were straying too far from traditional doctrines, but Pope Francis, who was elected in 2013, put an end to the investigation in 2015.

Campbell noted that senior members of the Curia, or Vatican administration, were at a spiritual retreat outside Rome all this week and so unable to attend the women's conference.

"I don't know if it's a slap in the face or evidence of how much power they think we have," she said.

She acknowledged the church was changing but said it was "outrageous" that it was failing to respond to the sex abuse crisis more effectively. While noting that Francis was seeking to create a more inclusive church, Campbell expressed concern about the church hierarchy and the response to clerical abuse.

No Vatican officials are scheduled to speak at the conference, which has drawn leaders and activists from around the world.

At a media conference on Monday, Kerry Robinson, an American who is global ambassador of the Leadership Roundtable, said her foundation, which promotes best practices and accountability in Catholic Church management and finances, was working to help churchmen solve challenges and ensure women advance in the church.

"I think the conversations we are having with cardinals are having an impact," Robinson said.

This is the fourth consecutive year that the Vatican has held the women's event to coincide with the U.N.-sponsored International Women's Day.