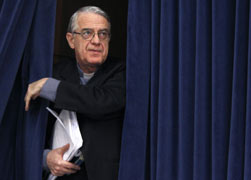 Rome -- The Vatican spokesman said today that he doesn't feel "under siege" because of massive media attention to the pope and the sexual abuse crisis, but given recent events, one might legitimately wonder if he was just being polite.

The question arises in the context of a briefing this morning about Pope Benedict XVI's April 17-18 visit to Malta, where Jesuit Fr. Federico Lombardi, the Vatican spokesman in question, tried gamely to focus on the trip, but the ensuing discussion swirled largely around the crisis.

Benedict's brief stop in Malta, the 14th foreign voyage of his papacy and the eighth in Europe, will be his first public outing since the recent explosion of critical attention to his personal history in handling sex abuse cases.

Officially, Pope Benedict is travelling to Malta this weekend to mark the 1,950th anniversary of St. Paul's famous shipwreck described in chapters 27-28 of the Acts of the Apostles. No doubt, Benedict also wants to call upon the once ultra-Catholic Maltese to maintain their Christian identity in the face of strong secular pressures in contemporary Europe. Lombardi said that Benedict will likely also raise the topic of immigration, since Malta has a growing immigrant population and it's a contentious social issue in most of Europe.

Lombardi tried to frame the morning session by reading aloud at length from the Acts of the Apostles. That, however, didn't distract reporters from pursuing the dominant storyline about Benedict XVI these days.

After Lombardi finished a detailed explanation of the pope's itinerary, the first question was whether the pope will meet with victims of sex abuse in Malta, as he has previously done in the United States and Australia. For the record, that question came from me.

"I don't have a definitive response to give you," Lombardi said, saying that in general Benedict has made it clear, including in his recent pastoral letter to Ireland, that he's open to such meetings.

"The general approach is that these meetings must be done calmly and intentionally, to create an atmosphere of discretion and reflection, not under media pressure," Lombardi said. "There must be the possibility of listening and personal communication."

That said, Lombardi added that the pope's time in Malta is short, and that if he can't meet victims on this trip, "other ways will be found to express the will of the pope" to have more such encounters.

Lombardi also noted that the Maltese bishops recently held a press conference to discuss their approach to cases of sexual abuse, including the creation of a national "response team" to look into allegations.

Later, Lombardi was pressed on whether he was excluding the possibility of a meeting with victims in Malta.

"I have not announced" such a meeting, he said, "nor have I excluded it."

"I am not the pope, and I don't decide what he does on his trips," Lombardi said. "I have to remain within the limits of my competence." He said that when and if someone informs him of a meeting, he'll pass the word to the press.

For now, Lombardi said, no such encounter is officially on the program, and he cautioned journalists against creating "great expectations" of a meeting.

Lombardi was asked whether the Vatican is worried about the possibility of protests against Benedict XVI in Malta, which local newspapers have described as in the works.

"The Vatican is aware of what the newspapers are writing, but we also have direct contact with the nuncio and with the local bishops," Lombardi said. He described such protests as "fairly normal," pointing out that many previous papal trips have also drawn demonstrations or protests of one sort or another.

"Given the presence of the Catholic church in Malta and the attention to Catholic life," Lombardi said, any protests would represent only "a minority" of popular sentiment. He urged media outlets "to report the true dimensions of the problem," insisting that however many Maltese turn out to express dissent, "many more will be enthusiastic."

Lombardi insisted that the Vatican has "no special fear" about how Benedict XVI will be received.

"We are going to Malta with great serenity, knowing of its spirit of friendship and its desire to welcome the Holy Father," he said.

Lombardi then took the "siege" question.

"Personally, I don't feel under siege. I've never expressed that attitude," he said.

That said, Lombardi acknowledged that he's occasionally been caught off guard by the intense interest in the sex abuse story. For example, he said, when the Vatican yesterday published a brief guide to canonical procedures in sex abuse cases, he didn't take it as an "epochal revolution" – yet, he suggested, some media coverage seemed to convey that impression.

On the broader issue of Vatican communications, Lombardi conceded that "we could do some things better," but said that the church is on a "gradual path," one which takes twists and turns based in part on the kinds of questions the media asks. He pledged to keep moving in the direction of "transparency."

Finally, Lombardi was asked about speculation in Great Britain about issuing an arrest warrant for Benedict XVI on the grounds of being complicit in a global conspiracy to protect pedophile priests.

"It's a fairly original initiative, if nothing else," he said, describing it more as a gesture directed at public opinion than something "concrete and serious." He added that since Benedict's September trip to England is officially a state visit, "it would be strange if the person invited by the state were to be arrested."

More than that, Lombardi added, he couldn't say.

"I'll leave it to the creativity of those who announced this idea," he said.

Vatican says it did not impede Irish abuse efforts

Pope approves canonizations, but doesn't set date because of pandemic