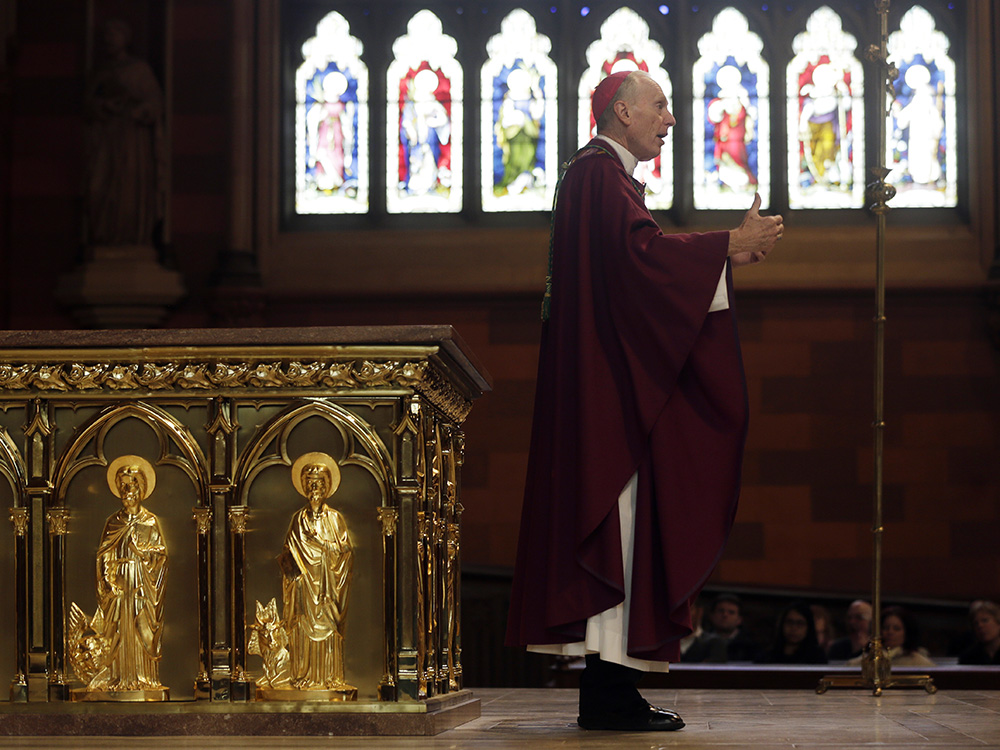 The news, coming through a press release on a Friday evening in mid-November, was unexpected. Bishop Howard Hubbard, the retired leader of the Diocese of Albany, New York, and now under investigation for both allegedly abusing children and covering up abuse done by others, was requesting the Vatican remove his status as a priest, or laicize him.

Among those caught by surprise were Hubbard's alleged victims, as well as the civil attorneys representing them. They, along with canon lawyers well-versed in the Catholic Church's disciplinary procedures for clerics accused of sexual misconduct, are struggling to make sense of Hubbard's request.

Some suspect that Hubbard may be trying to short-circuit a canonical investigation by preemptively assuming the most severe punishment that the church can impose on a cleric. Others think Vatican machinations are at play, and wonder if Hubbard is following the advice of church officials in Rome to save face and spare his diocese the embarrassment of having its former bishop laicized as part of a Vatican court's judgment.

"I think this is an inside job. A bishop is not just going to show up and say, 'I quit.' This is how the Vatican operates behind the secret curtain," said Mitchell Garabedian, a Boston attorney who has represented hundreds of clergy sex abuse survivors across the country, including in Albany.

At least 10 individuals have accused Hubbard, 84, of sexually abusing them as minors, according to BishopAccountability.org, an online clearinghouse that documents the clergy sex abuse crisis. Hubbard has denied the allegations.

"I have never sexually abused anyone in my life," Hubbard said in 2019 when survivors began bringing forward their allegations against him in state court.

However, Hubbard, who served as bishop of Albany from 1977 until he stepped down in 2014, admitted in an April 2021 deposition that he covered up allegations of clergy sex abuse in his diocese as its bishop because of his concerns regarding "scandal and respect for the priesthood." He is a defendant in at least six lawsuits filed by sex abuse survivors.

Hubbard is also being investigated under Pope Francis' new process for investigating allegations of abuse or cover-up by bishops, as detailed in the 2019 motu proprio apostolic letter Vos Estis Lux Mundi ("You Are the Light of the World"). As part of that process, New York Cardinal Timothy Dolan, the metropolitan archbishop for the province including the Albany Diocese, is responsible for investigating the claims against Hubbard.

Attorneys representing clients with abuse claims and canon lawyers who have followed the situation in Albany are also bemused by some published reports that suggest Hubbard, who had a stroke in July, is petitioning the Vatican to remove him from the clerical state because he wants to get married. Hubbard's spokesman did not respond to multiple messages seeking confirmation for this story.

"It's a confusing situation. And I'm not sure where the truth lies," Charles Reid Jr., a canon lawyer and law professor at the University of St. Thomas in St. Paul, Minnesota, told NCR.

One thing that attorneys on both sides agree on is that whether the Vatican grants Hubbard's laicization request, the decision will probably have little impact on the civil litigation that Hubbard faces in the New York state courts. The pending lawsuits accuse Hubbard of molesting minors from the late 1970s to the 1990s. 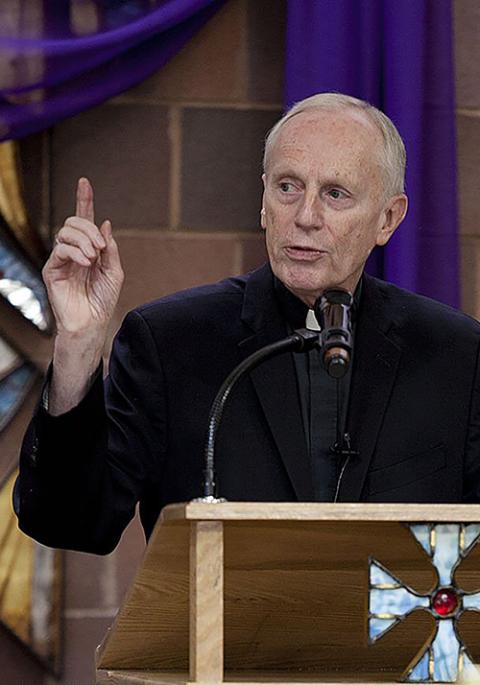 Hubbard's laicization request is "sort of bizarre and it's kind of unprecedented, but as far as the core legal question as it pertains to the CVA [Child Victims Act] cases, I don't see that it does have any impact on it," said Mallory Allen, an attorney representing one of the plaintiffs who have sued Hubbard since New York's Child Victims Act was passed in 2019. The act set aside the normal statute of limitations on civil suits involving childhood sexual abuse for a two-year period.

Allen told NCR that she could foresee a possibility at trial where attorneys representing Hubbard and the Albany Diocese would try to prevent his request for laicization from being presented to a jury, on grounds that it would be unfairly prejudicial.

"Oftentimes, though, that kind of evidence is admissible on a question of credibility, so that the jury has a full picture of who's been deposed, whether to take their testimony seriously or whether to have some distrust in it," Allen said.

Jeff Anderson, a Minnesota attorney who questioned Hubbard in the April 2021 deposition where the bishop admitted to not disclosing clergy sex abuse cases to law enforcement, told NCR that Hubbard's laicization request "doesn't make a difference" in court.

"It doesn't change anything we do on the civil side. But the fact that there is a proceeding in their [canonical] process means we will get all those documents," Anderson said about the Vos Estis investigation.

On Nov. 21, a New York State Supreme Court justice ordered the New York Archdiocese — which is conducting the Vos Estis investigation — to turn over more than 1,400 pages of internal church documents to attorneys representing survivors who have sued Hubbard and the Albany Diocese. The archdiocese had refused an earlier request to provide the documents on First Amendment religious liberty grounds.

"Whether or not they are produced at trial is unsure, but we will be seeking those documents as well, given that we also have a claim" against Hubbard, said Allen, the attorney representing one of the plaintiffs in Albany.

Robert Flummerfelt, a Las Vegas-based canon lawyer who is also a civil attorney, told NCR that Hubbard's laicization request, if granted by Rome, could be relevant to jurors in Albany assessing culpability at trial.

"It's a perception thing that could cut either way from a litigation perspective," Flummerfelt said, adding that a jury could discern guilt and culpability on Hubbard's part if he were laicized and could also find the Albany Diocese liable for damages, regardless of Hubbard's ecclesial status. 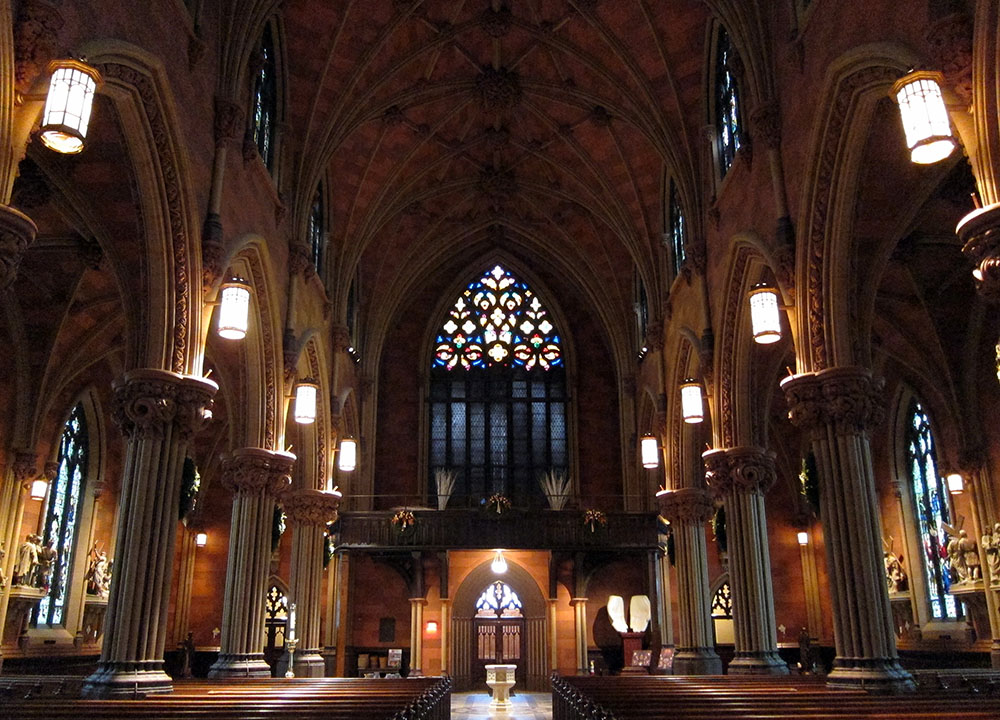 The interior of the Cathedral of the Immaculate Conception in Albany, New York (Wikimedia Commons/Nheyob)

While not guaranteed, canon lawyers interviewed for this story said they believed that the Vatican would be inclined to grant Hubbard's request to be removed from the priesthood.

"I think the pope would sign it immediately," said Kelly O'Donnell, a canon lawyer who anticipates that the official decree that laicizes Hubbard will specify what activities he will not be permitted to participate in, given the nature of the allegations against him. She said Hubbard will likely be prohibited from volunteering in parish ministry or Catholic schools or teaching Sunday faith formation classes.

"I can just imagine how Bishop Hubbard's [decree] will read. It will be very specific," O'Donnell said. "He will not be allowed to do anything in the church or perform any lay ministry. It will go beyond the penalty of being reduced to the lay state. It will be very restrictive."

O'Donnell also said she has read some laicization decrees that prohibited former clerics from marrying in the Catholic Church. Other canon lawyers told NCR that the Vatican could theoretically put a similar restriction on Hubbard.

"It would be within the Vatican's power to place that restriction, but there would be a reluctance to do so," said Reid, the University of St. Thomas canon lawyer and law professor, who noted that canon law recognizes marriage as a natural right even as it permits church leaders to restrict access to the sacraments.

"Prudentially, you have to strike that balance," said Reid, who echoed other canon lawyers in saying he believes the Vatican will likely want the New York Archdiocese to complete the Vos Estis investigation before it takes on Hubbard's request to be laicized.

"Normally, this would be a matter of months, but if this is a matter to preempt an investigation, it may take longer," Reid said.

"A return to the lay state has always been the last thing the Vatican does after conducting an investigation, after determining there's wrongdoing," Reid added. "So I wonder if he's trying to procedurally game the system, to preempt a canonical investigation. I think that's a legitimate question."

A version of this story appeared in the Jan 6-19, 2023 print issue under the headline: Victims' lawyers try to make sense of Bishop Hubbard's request to be laicized.