Virginia Sloyan, a writer and editor who for decades produced materials to help the Catholic Church implement liturgical changes after the Second Vatican Council, died March 11 at age 87. 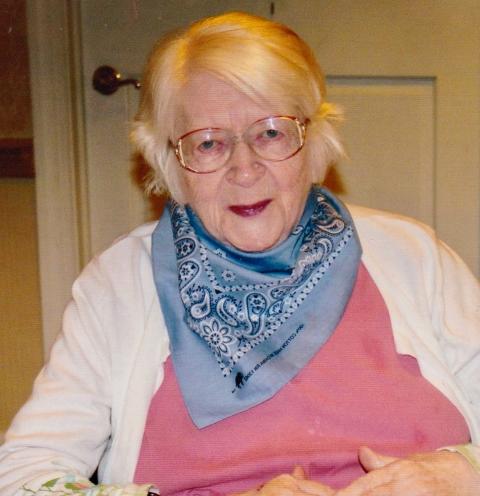 Virginia Sloyan, a writer and editor who for decades worked for the Liturgical Council of Washington, producing materials to help the Catholic Church implement liturgical changes after the Second Vatican Council, is pictured in a 2016 photo. Sloyan died March 11 at age 87. (Courtesy of Patrick Sloyan)

Sloyan never forgot that "the dimensions of the liturgy are about the shaping of people to serve the world, not just to have a beautiful service or a good time," said Gabe Huck, who worked with Sloyan in the Liturgical Conference of Washington. "It was about shaping people to serve as she did."

Sloyan, who died in Rockville Nursing Home in Rockville, Maryland, just outside Washington, D.C., was the "heart and soul" of the Liturgical Conference for years, while other staff members came and went, said Huck.

A dedication to Sloyan in a 2002 issue of Liturgy journal thanks her for "lavishing abundant gifts and faithful stewardship on the people and the work of the Conference" for more than 40 years.

The organization had started as an annual "liturgy week" in 1940 but gained new momentum after the Second Vatican Council's Constitution on the Sacred Liturgy was promulgated in 1963.

Beginning in the 1960s, Sloyan helped organize and coordinate the liturgy weeks, which, according to the Liturgical Conference's website, drew nearly 20,000 priests, religious and laypeople from all over the United States in the years immediately following the release of the constitution.

In the late 1960s, the conference's focus shifted to creating written materials to help the church successfully implement liturgical changes, publishing books and producing a journal called Liturgy and another called Homily Service.

Sloyan's position as editor of Homily Service made her well-known to many priests and ministers, her cousin Patrick Sloyan said in an email to NCR. The journal "added heft to weekly sermons and was a life-line for many parish priests facing a weekly deadline."

Sloyan also wrote for Homily Service and wrote and edited other publications, Huck said, showing a talent for discerning reading, editing and writing and not always receiving much recognition for her work.

"You'd have to see the small print somewhere to see that this magazine or this periodical or this book was brought together by Virginia Sloyan," Huck said.

Sloyan is survived by an older brother, Fr. Gerard Sloyan of Potomac, Maryland, who is a well-known Catholic author and scholar. She was preceded in death by two older sisters, both nuns.

According to an obituary written by Patrick Sloyan, Virginia Sloyan was born in New Rochelle, New York, and graduated from the College of New Rochelle. She was one of the original staff members of the Peace Corps after President John F. Kennedy created it in 1961.

Sloyan's published works include Parishes and Families: A Model for Christian Formation Through Liturgy, Children's Liturgies and Touchstones for Liturgical Ministers.

Perhaps her best-known work is Death: A Sourcebook about Christian Death, a collection of song lyrics, poems and prose excerpts published in 1989, which Huck described as one of the best works in a series he published at Liturgy Training Publications.

"She knew when good writing was happening and she'd recall it in the right place and use it," Huck said. "That's kind of amorphous but it's a pretty wonderful and pretty rare quality."

Sloyan also helped connect people who were doing work related to the liturgy. "She was a liaison with people all throughout the United States who were involved in the liturgy and changes in the liturgy," her longtime friend Constance Dupre explained. "So she knew many people from different colleges and universities and monasteries. She dealt with practically everyone who dealt with the liturgy."

Sloyan's influence also extended beyond Catholic circles, especially after the council merged with the inter-Lutheran Society for Worship, Music and the Arts in 1979. According to the organization's website, it now includes "members of the United Methodist, Reformed, Lutheran, evangelical and Roman Catholic churches" and is committed to "Christian unity as well as liturgical renewal."

"I remember Virginia as a creative and industrious employee who embodied the ecumenical and liturgical goals of the organization," said former Liturgical Conference board president Gail Ramshaw in a statement forwarded to NCR by current president Stephanie Perdew VanSlyke.

Huck emphasized that Sloyan also demonstrated in her own life how the liturgy can shape people to be active in the world. She was involved in anti-war and anti-poverty efforts and ministered to the sick in her parish. Even in her last months, said Huck, Sloyan befriended the workers in the nursing home where she lived.

But according to Dupre, Sloyan's primary love was always the liturgy. Dupre said Sloyan was not heavily involved in direct service or advocacy, and was less interested in private devotions.

"The core of her religion was liturgical, rather than private prayer. She felt that prayer to God should basically be a communal thing," Dupre said. "That was her way of relating to God and to other people in a religious way."

Sloyan's funeral mass will be held at Our Lady of Mercy in Potomac, Maryland,* on March 23. She donated her body to the Georgetown University Hospital for research.

[Maria Benevento is an NCR Bertelsen intern. Her email is mbenevento@ncronline.org.]