A walk in the dark: patrolling with the Samaritans

by Michael Pratt
This article appears in the Immigration and the Church feature series. View the full series. 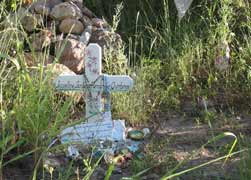 Joselina's shrine, a memorializado to a girl unable to keep going, left behind and lost to this life in the desert (K. Helbling)

"That's Gray Well," said Bob, pointing to an old-fashioned windmill as we pulled into a spot of shade. It sang a dark, galvanized song as the breeze turned it around and around. We'd been on the road for a couple hours, half of it on a remote, twisting road. I had come to the Coronado National Forest, near the border in Arizona, to see migration for myself.

Olga, Leo and I got out and stretched our legs, talking about the life of the migrant. We were a dental technician, a church worker, a retired paramedic and ranger, and an astronomer. Soon Leo will walk the Camino de Santiago in Spain; while most Americans are waking up and wondering what to wear, Olga searches for dark matter in the hearts of galaxies.

Whether they are Buddhist, Catholic, Quaker or Unitarian, when it comes to saving lives in the desert, people in this movement are all of the same communion. Today I would learn one more way this is done, looking for migrants in trouble, left behind and lost, disabled, sick from drinking cattle water. The weather had been cool but it had not rained, reducing the risk for now.

As we looked around we saw rolling hills with dark red, rocky summits, tall dry grass, mesquite, chollas and prickly pear cactus. For a stranger alone -- in 100 degree-heat in the dark, coyotes howling -- this is a forbidding place.

Over saddles and around summits, along arroyos, we saw odds and ends left by these night travelers. One water bottle left full by another humanitarian group, No More Deaths, carried the handwritten legend:

no mas paises
no mas migra
no mas fronteras

no more countries
no more Border Patrol
no more borders

Seemingly a radical idea, this is similar to the advocacy of the U.S. Conference of Catholic Bishops. Leo says migration policy is one of the few things the bishops all agree on.

We made a short side trek to Joselina's shrine, a memorializado to a girl unable to keep going, left behind and lost to this life in the desert. Her picture is there, a few Mexican coins, small bottles of water, holy cards, crosses and rosaries. In her picture she seems so young, thin, not naive but vulnerable. How could this have happened? The reported location was confused, and repeated searches over two weeks were unavailing until she was finally discovered.

I don't think of the area in which we were hiking as unusual. This was the desert I had come to know. The discarded items along the trail are no longer strange to me. We saw no migrants -- just hunters and their paraphernalia. I'm used to seeing migrants near the border, but the economy is not what it was and they're crossing in smaller numbers.

The traffic has also shifted to this new and rougher terrain, thousands of feet higher, adding days to the time needed to go 30 miles. That's partly why Joselina died. She was found in an unusual area, a water-sculpted arroyo with a rock floor holding some tinajas even now. A Charolais steer stared at us and moved into the shade as we passed.

We distributed a few jugs of water ourselves, stringing empties on a long cord as we went. Two hunters had bagged a javelina; they told us they thought we were "illegals." What would they have done if we were? There are also food caches and bright yellow Church World Service emergency blankets in plastic bags. Considering the weather turned cold and rainy the next day, this all seems to be the right prescription. But what is the treatment for? Doesn't the Border Patrol find people before they die?

The short answer is not always -- they tried and failed to find Joselina. Granted, they report that they rescue 120,000 people yearly, but they may deport the reporting party before they can get a good description of the search area. The prevailing sentiment in this group is that no one should die to get a job.

At a county park, on my way home from Arizona, I meet Sandra and Will, who are hiking the Arizona Trail. Their beautiful, comfortable-looking gear compares favorably to the torn, tied-together packs and old gym bags of the migrants. Including water and the supplies in their drops, sent ahead to meet them along the way, their packs will not exceed 30 pounds as they wend their way north from Mexico through the state of Arizona.

From my campsite I see them stride by, followed soon by the evening bike patrol. Sandra even took the time to go on a horseback ride. This is how we Americans make our epic journeys. There are apparently only 10 or 20 people who complete the Arizona Trail yearly. These formidable souls will then continue on the Hayduke Trail.

The dark night of the soul begins when we become lost. The condition of the lost person in the wilderness is outside time and place; the experience is depersonalizing, dispiriting. All of the travelers in this story have some kind of support, all have families, they often have medical problems, and their travels are often in some sense a pilgrimage. At times they all become lost or disoriented.

Dante began his travels in The Divine Comedy "nel mezzo del cammin di nostra vita" -- "in the middle of this, the road of life" -- in the same way as our travelers. Bob believes the migrant trails we travelled are not visited by the Border Patrol, which relies on other means to detect human presence. Thus, there is luck, divine intervention, or certainly work by nonprofits or agencies, when the lost are found. Without Beatrice's care would the fictional Dante survive? I will often think of them as spring arrives and the summer blooms.

[Michael Pratt is a retired park ranger and a writer living in Estes Park, Colo.]

A walk in the dark: patrolling with the Samaritans

The Line in the Sand: Stories from the US/Mexico border

Immigration and the Church