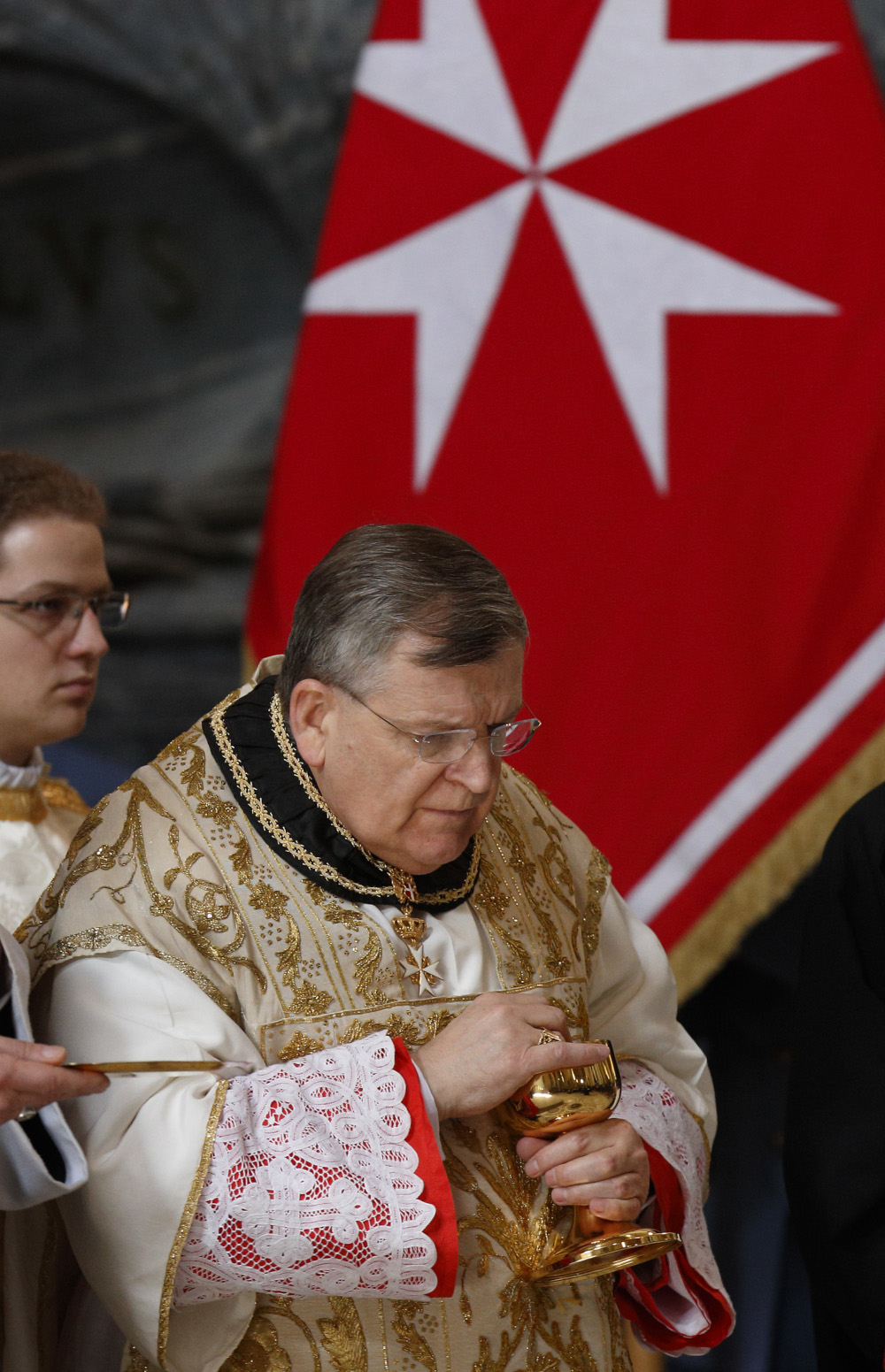 Internal documents relating to the public crisis that led to the resignation of the grand master of the Knights of Malta in 2017 were released by WikiLeaks.

Among the cache of dossiers, memos and documents released by the organization Jan. 30 were confidential letters signed by Pope Francis and Cardinal Raymond Burke, patron of the Knights of Malta, prior to the crisis that engulfed the order in early 2017.

While the leaked dossiers do not reveal much new information, they add some context to the events leading up to the controversial removal of Albrecht Freiherr von Boeselager, the order's grand chancellor, by Fra' Matthew Festing, the former grand master.

Francis established a commission Dec. 22, 2016, to gather the facts and "completely inform" the Holy See about the circumstances leading to von Boeselager's removal as well as to foster dialogue and a peaceful resolution.

After receiving the commission's report, Francis met with Festing Jan. 24, 2017, and accepted his resignation.

The crisis put the Order of Malta into the media spotlight with numerous articles speculating about a rift between conservative and progressive factions within the ancient order.

The grand chancellor's removal by Festing was triggered by an incident involving one of the many charitable projects the Order of Malta is involved in through its humanitarian relief agency, Malteser International.

Von Boeselager was serving as health minister in 2013 when Malteser International worked with several humanitarian agencies on a project in Myanmar aimed at preventing the spread of AIDS. Among other things, the project distributed condoms, something von Boeselager later said "had been initiated at a local level without the knowledge" of Malteser International headquarters.

Von Boeselager said that when he found out, he moved to halt the distribution of condoms and that he never tried to conceal what had happened.

Festing, nevertheless, forcibly removed von Boeselager from his post as grand chancellor in early December 2016 citing "severe problems" during his tenure as grand hospitaller of the Order of Malta and "his subsequent concealment of these problems from the Grand Magistry."

According to the official timeline of events published on the order's website, Festing also stated that the request for von Boeselager's removal was "an explicit 'wish' of the Holy See."

However, among the documents released by WikiLeaks was a Dec. 1, 2016, letter to Burke signed by Francis. In the letter, the pope asks the order to ensure that "its initiatives and health care works are not contrary to moral law."

The pope also expressed his hope that any problem of this nature would be resolved, and he said he would be "disappointed if high officers were aware of practices such as the distribution of any type of contraceptives and have not yet intervened to end such things."

"I have no doubts that by following the principle of Paul and 'speaking the truth in love,' the matter can be discussed with these officers and the necessary rectification obtained," the pope said.

While the pope did not ask for von Boeselager's removal, he did urge the order to remove any member involved in "secular and frivolous behavior, such as membership in associations, movements and organizations which are contrary to the Catholic faith or are of a relativist nature."

"In such cases, knights who are members of these associations, movements and organizations should be asked to remove themselves from the order because their behavior is incompatible with Catholic faith and membership in the Order of Malta," the pope said.

An alternative timeline of the events released by WikiLeaks claimed that after von Boeselager's refusal to resign, Festing called for a vote by the order's sovereign council to remove the grand chancellor. However, the vote did not reach the required two-thirds majority to remove him.

The document also alleges that after the vote, Cardinal Burke informed Festing that "one of three things will happen": either the grand chancellor resigns of his own accord, the grand master removes von Boeselager by suspending him from the order for "having broken the promise of obedience" when asked to resign or Cardinal Burke "will recommend to Pope Francis to initiate a visitation of the order."

The Order of Malta declined to comment Jan. 31, saying the documents contain "nothing new."