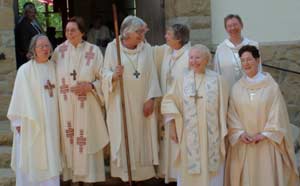 Roman Catholic Womenpriests USA, a group that supports the ordination of women to the priesthood, said it had ordained four women to serve as bishops in the United States. The ceremony took place April 19 in California, according to a news release from the organization dated April 21.

Officiating at the ceremony were Womenpriests Bishops Patricia Fresen and Ida Raming from Germany and Christine Mayr-Lumetzberger from Austria.

Raming and Mayr-Lumetzberger were among the seven women ordained by a male Roman Catholic bishop on the Danube River in Germany in 2002. Since then the Roman Catholic Womenpriests movement has ordained about 30 women in North America and have about that many North American women in formation. The movement ordained Dana Reynolds of California a bishop last year.

The Vatican's Congregation for the Doctrine of Faith issued a decree last year clarifying that such "attempted ordinations" were invalid and those who participate in them "incur an excommunication latae sententiae, " or automatically.

Roman Catholic Womenpriests said its members are "loyal members of the church who stand in the prophetic tradition of holy disobedience to an unjust law."

Following are biographical notes about the four women from Roman Catholic Womenpriests:

Joan Mary Clark Houk has been called by the members of the Great Waters Region to minister pastorally to the Womenpriests, Womendeacons and People of God of her region. To be always mindful of that call, she has "Faithful Servant" inscribed on her bishop's ring. Joan's many years of parish ministry, and her experience as a wife and mother has prepared her well for her pastoral role. Married for 48 years, Joan and John have six children, eight grandchildren and a great-grandchild.

Andrea Michele Johnson resides in Annapolis, Md., and has been elected to serve as bishop for the Eastern Region. She has worked in international education exchange with the senior Fulbright Scholar Program, and also as a director of religious education over many years. She was pastoral minister in a priestless Catholic parish in the mid-1980s and also served as a former director of the Women’s Ordination Conference. Andrea currently works in hospital chaplaincy. She is happily married to Spencer, her husband of 39 years and is the mother of three adult children -- two sons and one daughter -- and is the grandmother of two.

Maria Regina Nicolosi was elected by the members of the Midwest Region to be their bishop. Regina was born in the Rhineland, Germany, close to the Abbey of St. Hildegard and before she moved to the USA, she was a teacher. After raising her family, Regina worked as a senior housing manager and a nursing home chaplain. Currently, she celebrates Eucharist with small faith communities and has served as the program coordinator for the Midwest region. In this role she has helped prepare several women for priestly ordination. Regina is married and has four children and eight grandchildren. She and her husband Charles live in Red Wing, MN.

Bridget Mary Meehan, a Sister for Christian Community, was elected to serve as bishop for the Southern Region. She presides at inclusive liturgies and sacramental services for vibrant faith communities in Sarasota, Florida and Falls Church, Virginia. For fifteen years, Bridget Mary served as a pastoral associate at Ft. Myer Chapel in N.VA. She is the author of eighteen books including Praying with Women of the Bible, Praying with Visionary Women, and co-author of Praying with Celtic Holy Women. She is host/producer of TV/Internet media designed to promote justice, equality and mutual respect, and dean of the Doctor of Ministry Program for Global Ministries University.