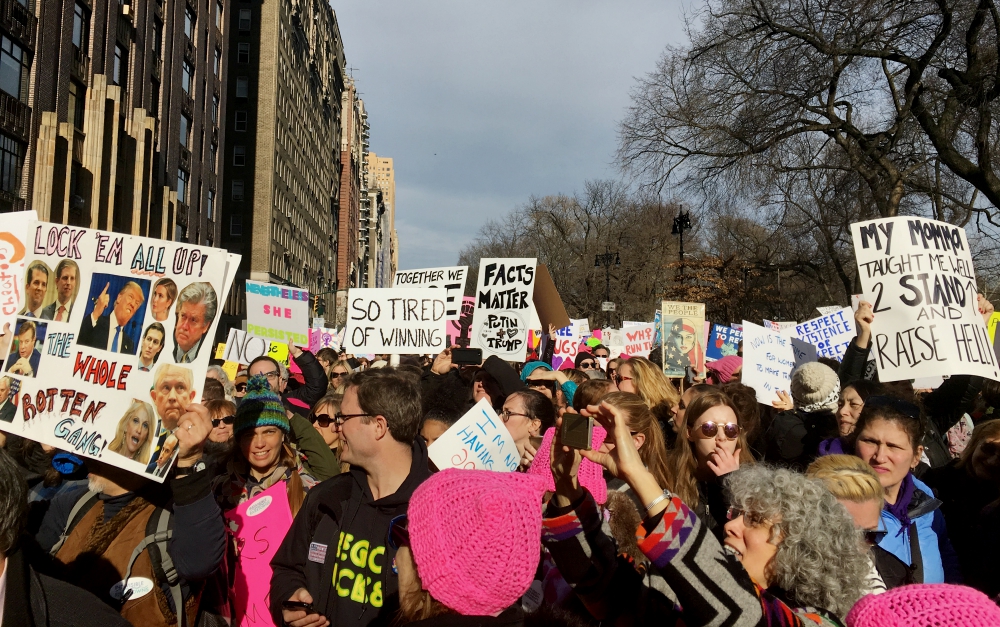 If the first Women's March was about expressing anger and frustration about the election of Donald Trump as president, the second one seemed more focused on getting to work to overturn his policies and unseat his supporters.

As in 2017, Catholic women and organizations were among those marching at protests around the country Jan. 20, adding to record-breaking crowds in cities such as Chicago and Austin, Texas.

The main national event, scheduled for today in Las Vegas, is being called "Power to the Polls" and is aimed at launching a national voter registration tour.

On Saturday in Chicago, where the march was dubbed a "March to the Polls," an estimated 300,000 marchers took to the streets, surpassing last year's number of 250,000 marchers. Among the chants from the crowd: "Elect more women!”

That's exactly what Andrea Raila is trying to do. Inspired at the 2017 Women’s March in Washington D.C., Raila decided to run for Cook County Assessor to try to revamp the tax system, which she says is unfair to poorer communities of color in the Chicago area. She is the first Democratic woman to run for that office in 85 years.

"You have to have courage to jump into the political ring," said Raila, a property tax assessment professional and activist who attends St. Gertrude and St. Ita Parishes in Chicago. "It's intimidating. But now is the time.”

Raila said she was energized by the huge turnout at the Chicago march. "It was electrifying and galvanizing," she said. "It gave me that boost that I needed to continue to put one foot in front of the other.” 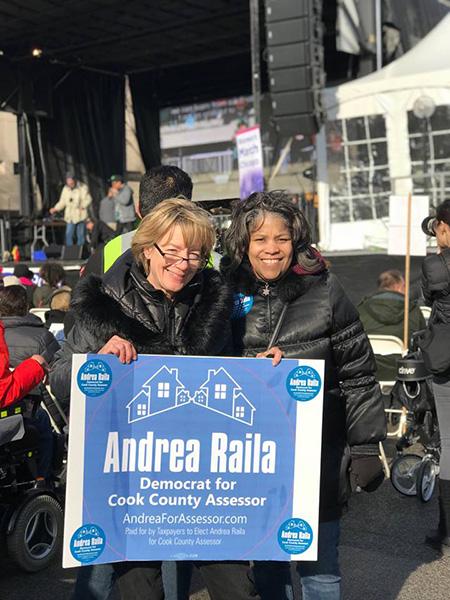 Andrea Raila was inspired to run for public office at the first Women's March in Washington D.C.. This year she marched with her campaign manager April Williams-Luster (right) in Chicago. (NCR photo/Heidi Schlumpf)

In New York on Saturday, nearly a quarter of a million people turned out on the streets of New York City, according to city officials.

But the march, according to its organizers, wasn't just about women.

"This march is about equality for all humans," Katherine Siemionko, founder and president of the Women’s March Alliance, told WNYC’s Brian Lehrer in an interview days before the march.

"Over the past year, basic rights for women, immigrants, LGBTQ+, the religious and nonreligious, people of color and even Mother Earth have struggled to survive under the weight of the current administration," she further explained on the Women's March Alliance Facebook page.

Like last year, this year’s crowd was strikingly intergenerational, from infants being carried in their mothers’ arms to the elderly pushing forward with canes or in wheelchairs.

Also like last year, the signs carried by marchers did not disappoint, bearing messages that were both profane and laugh-out-loud clever.

Rose-Milavec, who has 14 grandchildren, is executive director of FutureChurch. She participated in New York’s march in anticipation of the Feminism and Faith in Union event that will take place on Sunday in Union Square Park. 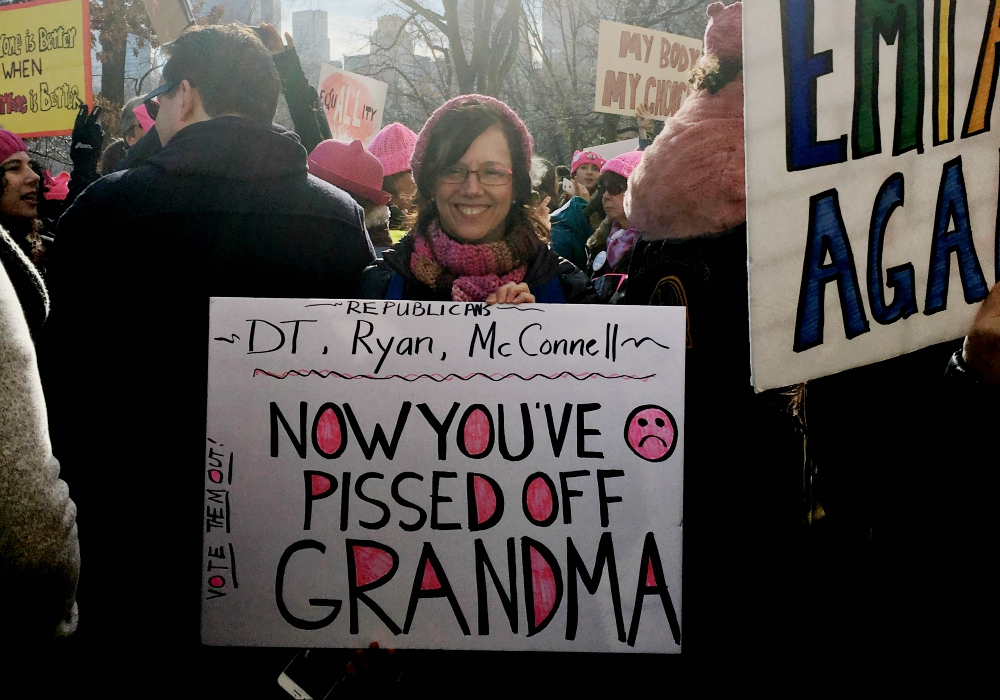 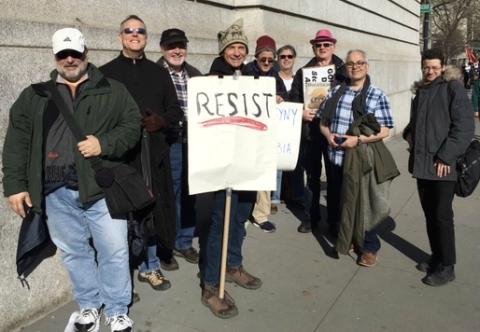 Members of the New York chapter of DignityUSA marched as a sign of intersectional justice with women. (NCR photo/Jamie Manson)

Other Catholic reform groups marched in small contingents, including the New York City chapter of DignityUSA. Members of the LGBT Catholic organization say they marched not only for solidarity, but also because of the way their struggle for justice intersects with women's equality.

"We are particularly sensitive to the ways that misogyny, sexism and gender discrimination are linked to homophobia and transphobia," said Jeff Stone, a member of Dignity New York's Steering Committee.

"This powerful witness also addressed so many of the other central justice issues of our time: immigration and refugees, the environment, access to healthcare and education, equal treatment of people of color, people with disabilities, and of course LGBTQI people," Stone continued. "Like all Catholics, we are called to speak out against injustice and to actively work for just solutions to social and political issues."

The marchers may have been campaigning about a variety of justice issues, but anyone reading the signs could quickly ascertain that this crowd was united against a common enemy: Donald Trump.

This year's parade route was entirely different, bringing the crowd down Central Park West, cutting through Columbus Circle and taking a final lap down Sixth Avenue.

The course allowed marchers to walk past several highly charged edifices, including the Trump International Hotel and Tower, the Trump Parc condominium building, and the FOX News headquarters.

The Trump buildings elicited a chorus of "Donald Trump has got to go!" The Fox building stirred marchers to point at the building while chanting "Shame! Shame! Shame!" in unison. 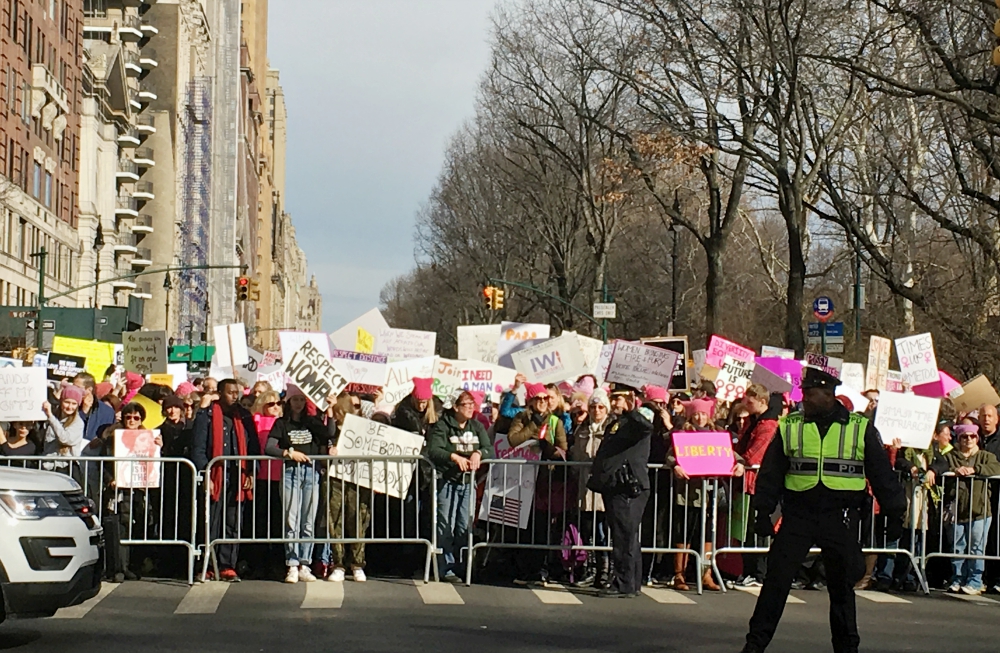 The march was so crowded that participants waited in line for more two hours before they could march. (NCR photo/Jamie Manson) 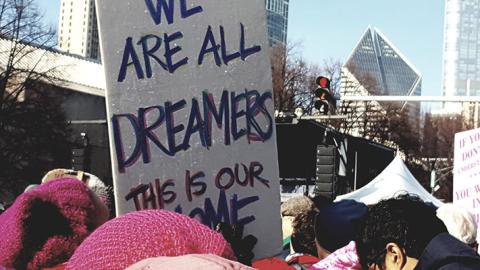 Signs at the Chicago march indicated the diversity of issues of concern, from immigration to health care to the environment. Anger at Trump — especially his most recent vulgar comments about certain countries — were common. But many signs were focused on the electoral process: "Grab 'em by the midterms" or "If you don’t have a seat at the table, you're probably on the menu.”

Ellen Joyce said her Catholic faith inspired her to make the trip from Beloit, Wisconsin, to march in Chicago against racism, anti-immigrant language and the denigration of people in poverty who need health care.

"Ranting about these things to my friends isn’t enough," said Joyce, who attends is Our Lady of the Assumption in Beloit. "Sometimes you have to show up.”

She was impressed with the "kindness and warmth of the crowd," which she said was "a good antidote to the vitriol from Washington and also from some of our fellow citizens.”

But the march also prompted her to reflect on her own activism. "I came away praying that I can continue to draw strength from my faith and not give in to despair and apathy," she said.

Controversy at the first march over pro-life activists being excluded was not an issue this year. However, Planned Parenthood was still a financial sponsor, which led some Catholics to stay home.

Mary Hallan FioRito, who is the Cardinal Francis George Fellow at the Washingiton D.C.-based Ethics and Public Policy Center, said she could not "on principle" attend the Chicago event because of Planned Parenthood's national support.

"I am a child of immigrants and I have three daughters, so there's a lot of the conversation that’s important to me," said FioRito, who attends St. Vincent Ferrer Parish in the Chicago suburb of River Forest. "The march organizers still have a way to go in including a diversity of women's voices and viewpoints.”

Also, for all of the energy generated by the event, some remain concerned that this movement will become a one-day per year action.

"These kinds of marches are important for expressing our collection vision for a better world and our discomfort and disillusion with the way things are," said Patricia Cipollitti, a recent graduate of Georgetown University and an organizer with the Alliance for Fair Food, a partner organization for the Coalition of Immokalee Workers.

"But we need to invest in long-term movements right now and become involved in strategic campaigns for justice," she said.

It was a sentiment echoed by a Women's March organizer who thanked participants at the finish line with a friendly reminder.

"Today's march is over, but the movement has only just begun," she said into her bullhorn. 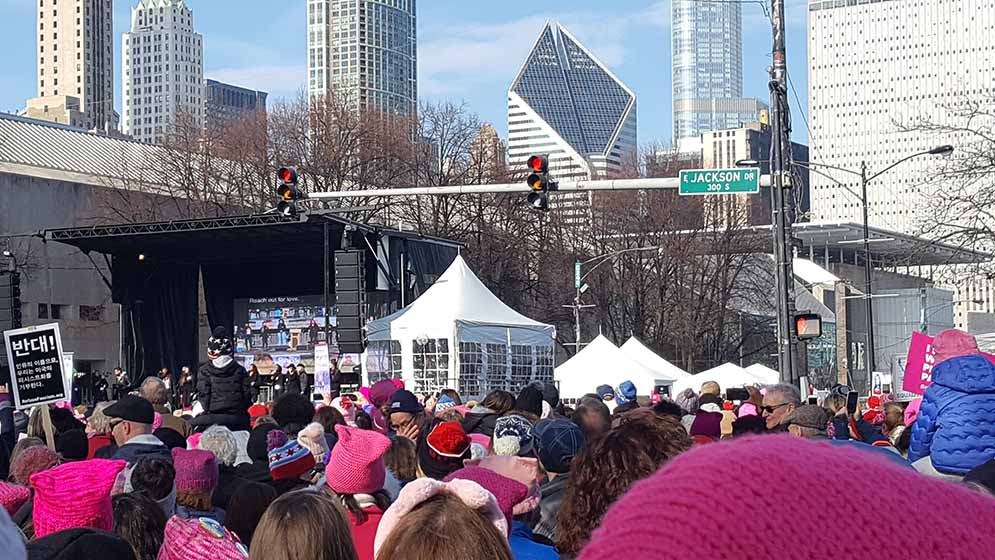