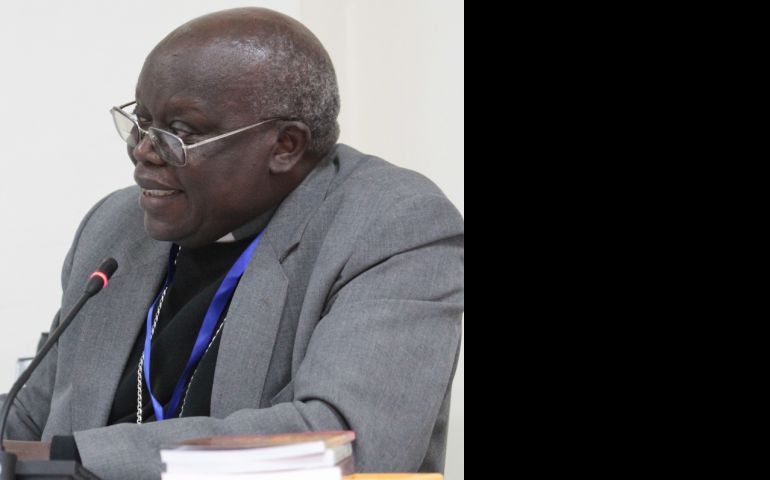 NAIROBI, Kenya — The Nairobi gathering of theologians might have surprised anyone who expects Catholic bishops to dodge and weave when addressing the hard-hitting realities of the day.

Three times during the Aug. 21-23 event, which was focused on the themes of reconciliation, justice and peace, a bishop took the podium before the theologians.

Invited by the gathering's organizers as "conversation partners," each of the prelates frankly addressed the situations of violence and conflict they've faced in their countries, speaking openly of their difficulties and successes.

Under the topic of reconciliation, Archbishop John Baptist Odama, whose archdiocese of Gulu spans the northern quarter of Uganda, spoke of trying to negotiate with the Lord's Resistance Army, the militant group led by Joseph Kony that has ravaged several central African countries.

Several times during his talk, Odama exclaimed that "God is powerful" as he explained his work through the years, which has included helping found a noted interfaith alliance of Uganda faith leaders for peace.

"The foundation," he continued, "is [that a] human being is being killed."

Bishop Eduardo Hiiboro Kussala of South Sudan's Tombura-Yambio diocese addressed the topic of justice. Hiiboro, whose diocese is located in the southwestern corner of South Sudan, shared both his own personal story of living with violence and the numerous challenges facing his newly formed country.

"By the time I was born, we were already at war with North Sudan," Hiiboro began his remarks. He was just 2 months old when his mother was killed during the 1983-2005 civil war in Sudan.

For years, the violence in his own life hampered his ability to work for peace, Hiiboro said. A "point of conversion" came during his seminary training when one of his professors asked him if he'd like to see another child lose his mother.

Hiiboro said he told the professor then that he would work "from that day so that no child would become an orphan in that way."

Following South Sudan's independence in 2011, said Hiiboro, who became bishop four years ago, a number of problems still plague the country, including a lack of governmental organization, poor development of resources, and resource extraction by foreign companies.

"It is one thing to obtain independence, but quite another to build the people of South Sudan," Hiiboro said. "We have much work ahead."

In an address on peace, Archbishop John Onaiyekan of Nigeria's Abuja archdiocese, who was named Pax Christi International's 2012 peace laureate in August, focused on interfaith relations. Nigeria's population is split roughly half and half between Muslims and Christians.

"Most of the time we live in peace," Onaiyekan said, though too few people recognize that. Lopsided media coverage focuses more on attacks by the Islamic terrorist group Boko Haram, which has plagued the country since 2001. "I think the world is not congratulating us enough for what we do," he said.

For example, he said, media accounts of a Christmas Day 2011 attack on churches failed to report that among the 41 people killed in the attacks were several Muslims who were walking by the churches as the explosions occurred.