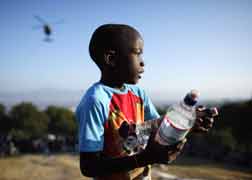 A Haitian boy receives water from U.S. forces at a food distribution point in Port-au-Prince, Haiti, Jan. 19. More than 11,000 U.S. military personnel are on the ground, on ships offshore or en route to assist with security and aid efforts in earthquake- ravaged Haiti. (CNS photo/Jorge Silva, Reuters)

WASHINGTON -- Facing a growing humanitarian crisis after the largest earthquake in Haiti in two centuries, Catholic aid agencies and world governments were boosting efforts to respond to the needs of hundreds of thousands of injured and homeless.

Agencies such as Jesuit Refugee Services and Catholic Relief Services as well as smaller organizations from around the world have raised millions of dollars to provide medical services, feed and shelter people and head off the rapid spread of disease.

The agencies were coordinating efforts with other religious, nongovernmental and government operations as hunger grew and some Haitians became increasingly impatient because they had received little or no assistance in the week since the Jan. 12 quake.

Haitian government and relief agency authorities raised their estimates of the number of dead to 200,000. Another 300,000 people were injured. Up to 3 million of Haiti's 9.8 million people were affected by the most recent natural disaster to strike the small nation.

Catholic Relief Services increased its pledge of aid for the impoverished nation to $25 million, and it could go higher, said Pat Johns, director of safety and security for the Baltimore-based agency. CRS, which is coordinating the Catholic Church's response, reported it had collected $13.1 million for earthquake relief as of early Jan. 19.

Caritas Internationalis, numerous other Catholic aid agencies and Catholic religious orders were working alongside CRS staff in a vast outpouring of assistance.

As the pace of the response accelerated, agencies took extra security measures after reports of looting in some Port-au-Prince neighborhoods. CRS was sending in its security expert from Africa and was working with U.N. peacekeepers to protect convoys as supplies were taken across the border from the neighboring Dominican Republic, Johns told Catholic News Service.

Christian Fuchs, communications director for Jesuit Relief Services USA in Washington, said the agency had opened several medical centers to assist injured people in some of the poorest neighborhoods of the Haitian capital and the surrounding area. The agency had raised about $150,000 for its relief effort as of Jan. 19.

Jesuit-run hospitals and clinics in the Port-au-Prince neighborhoods of Turgeau, Haut Turgeau, Delmas and Canape Vert reopened. A health care facility in the quake-ravage town of Leogane, about 25 miles west of Port-au-Prince, also reopened, he told CNS Jan. 19.

Teams of medical personnel from across the United States were being shuttled to Haiti. Creighton University in Omaha, Neb., and Loyola University Chicago are among institutions sending medical staff.

CRS was sending a plane with medical supplies and equipment as well as medical personnel and additional staff from Miami the afternoon of Jan. 19.

"One of the things we had is a big HIV/AIDS program through these clinics," Johns said. "We tapped into that."

CRS also opened a supply pipeline from the Dominican Republic border town of Jimani, about 35 miles from Port-au-Prince, to the Haitian capital.

Johns said shelter kits, bedding, mosquito nets, water and food were being distributed from one of two CRS warehouses in the capital. Although undamaged, the second warehouse was blocked by debris and distribution of its contents not yet begun as of Jan. 19, he said.

The agency hired workers to clear the blockage and Johns said he expected it would be at least another day before the stored supplies could be distributed.

Fuchs reported that Jesuits in Haiti and the Dominican Republic were seeing a growing exodus of people from Port-au-Prince heading to the Dominican border.

"We're concerned that could be an overwhelming situation," he explained. "We're pushing that anyone displaced by the earthquake be given accommodation in Haiti."

The church efforts supplemented the global response from the world's governments. As of Jan. 19, the United States had more than 11,000 military personnel on the ground or offshore preparing to mobilize. In addition nearly three dozen helicopters were flying supplies to nine landing zones around Port-au-Prince.

The $5 million (US$4.8 million) the Canadian government pledged immediately after the quake was being supplemented by the Haiti Earthquake Relief Fund, administered by the Canadian International Development Agency.

The fund will match charitable donations from individual Canadians, dollar for dollar, up to CA$50 million. Development and Peace, the Canadian bishops' international relief and development agency, was among the agencies eligible to receive the matching funds.