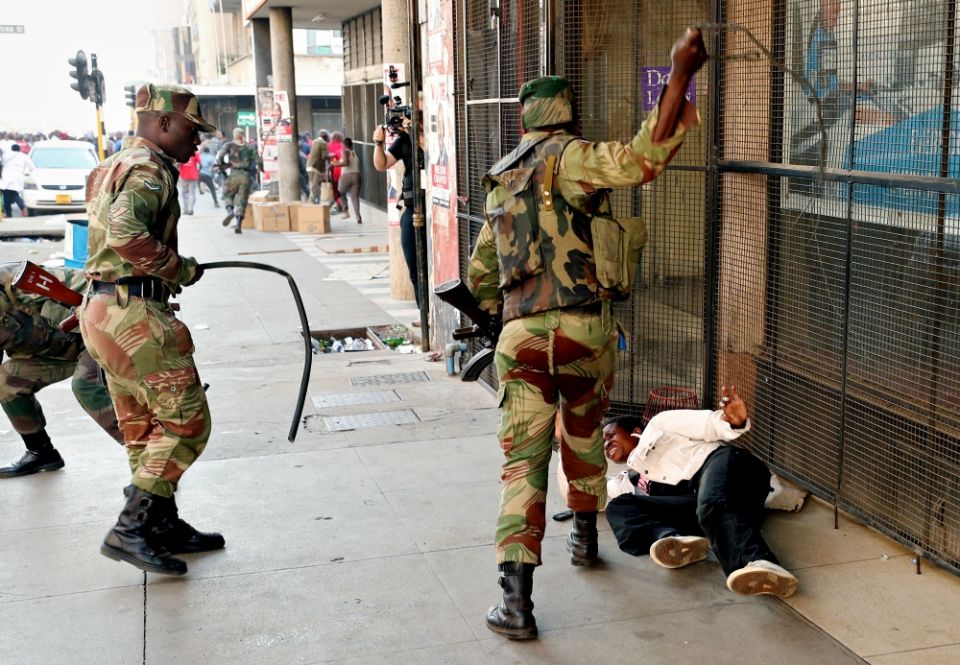 Soldiers beat a female supporter of the MDC Alliance opposition party of Nelson Chamisa outside the party's headquarters as they await the results of the general elections Aug. 1 in Harare, Zimbabwe. (CNS/Reuters/Mike Hutchings)

Harare, Zimbabwe — Catholic and other church leaders are preparing to play peacemaker roles in Zimbabwe as the post-election environment has degenerated into violence and disputes between the incumbent ruling party and the opposition intensify.

The election, which pitted President Emmerson Mnangagwa's Zanu PF party against Nelson Chamisa's MDC Alliance, was expected to place Zimbabwe on a new trajectory that would help put the country's economy back on its feet and unite the nation, long polarized along political lines.

The Zimbabwe Catholic Bishops' Conference had said in the run-up to the July 30 poll that Zimbabweans needed it to be peaceful.

Instead, Mnangagwa's narrow victory — he officially won 50.8 percent of the vote — led Chamisa's MDC Alliance to charge the poll had been stolen. The aftermath has been a trail of destruction and death as the country sinks into violence.

At least six people died in violent skirmishes Aug. 1 as Zimbabwean citizens in Harare protested first the delay in reporting presidential election results by the Zimbabwe Electoral Commission. It is suspected military personnel were deployed to quell the protests; government officials refuse to confirm this despite video evidence of soldiers firing live shots into the protesters.

Protests and violence against the demonstrators continued when the results were released.

The Zimbabwe Council of Churches, which described the polls as a "highly contested and emotive electoral" process, is seeking ways to help ease tensions. The church leaders are calling for acknowledgement of wrongdoing in the circumstances that led to the shootings, and for closure through justice. Zimbabwe government leaders through Mnangagwa have also consoled families of the victims saying that violence is undesirable.

Calls from church leaders for calm between warring parties and for citizens to restore peace have had little effect amid growing concerns and allegations of state-sponsored violence, with opposition parties charging that soldiers have been deployed to beat up people in Harare suburbs.

Mnangagwa was declared the winner of the July 30 poll receiving, according to the Electoral Commission, 50.8 percent of the presidential vote ahead of his closest rival, Chamisa, who had about 44.3 percent. Chamisa disputes this outcome, saying the electoral body manipulated the poll tallies.

Zanu PF, which last November dismissed Robert Mugabe, party leader and president of Zimbabwe since the country's independence in 1980, won more than a two-thirds majority in the parliamentary poll.

Chamisa and his MDC Alliance have until Aug. 10 to contest the election results, which they have pledged to do.

The Zimbabwe Council of Churches is very concerned about the divisions in the country, according to the Rev. Kenneth Mtata, general secretary of the council.

"From the announced results, we note with deep concern that our nation is deeply divided," council's statement said. "The deepening polarization between urban and rural voters, younger and older voters, as well as richer and poorer voters requires urgent redress through a holistic process of nation building and envisioning. The cry of different sectors of our population requires both a pastoral and prophetic response."

Echoing this concern about divisions is Pastor Shingi Munyeza of Faith Ministries. If Mnangagwa is upheld as the winner of the election after Chamisa's anticipated court challenge, Mnangagwa will have to face the fact that "49.2% of the voters do not like" him, Munyeza said.

To foster unity, the new president will have to "show transparency and accountability," Munyeza added.

1. 49.2% of the voters do not like you - UNITE US.
2. Our skill is in urban whilst our resources are in rural - BRING EQUITY
3. Make us trust you - show TRANSPARENCY & ACCOUNTABILITY.
4. You are of an older generation - EMPOWER the YOUTHS
God bless #Zimbabwe pic.twitter.com/7C07YzOmdT

The Zimbabwe Catholic Bishops' Conference is trying to broker a peace deal between the warring political parties in the aftermath of the bloody protests in Harare.

Douglas Mwonzora, secretary general of the MDC Alliance, confirmed that his party has held meetings with the bishops to map a way forward and as a means to end the violence that is being reported across the country.

"We had a fruitful discussion with the Zimbabwe Catholic Bishops Conference over the situation in Zimbabwe. We reiterated our commitment to peaceful resolution of the Zimbabwe crisis," he said.

However, little progress is expected as long as the polls are in dispute. After meeting with Catholic leaders, Mwonzora insisted that his party "cannot possibly accept election fraud."

The bishops' conference was optimistic in the lead-up to and during the voting. The election was not perfect. Commonwealth and European Union observers noted state media bias and intimidation of opposition supporters, among other contentious issues.

In a July 31 press conference, the bishops also noted some irregularities that would have made the voting process difficult. For example, "the pictures and names of contesting candidates on the ballot papers were too small and difficult to read. This is one reason why some voters took time in the polling booths," holding up already-long lines, the conference said.

But the bishops reported that the "environment remained peaceful up to the close of the poll." 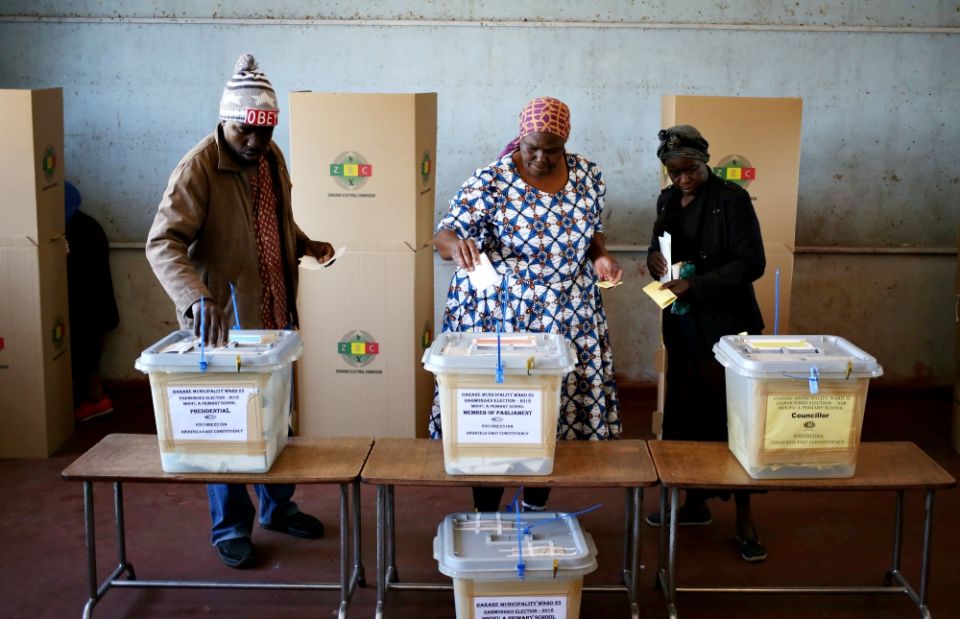 Reports of violence in suburbs around Harare have been growing and the Zimbabwe Council of Churches is reaching out to young people and other citizens with messages of peace.

Political intolerance and economic decline had become the hallmarks of Mugabe's regime. After Mnangagwa, a longtime aide of Mugabe's, ousted the president in November and pledged to hold elections, the international community appeared to be warming up to Zimbabwe. It had been anticipated that a smooth election would help restore ties with international investors, aid partners and other foreign organizations.

The church leaders in Zimbabwe are agreed that "peace is not going to be achieved in the absence of justice," in the words of the Zimbabwe Council of Churches statement, especially in the aftermath of the violence that has claimed six people.

Nicholas Shamano, country manager for Christian Aid in Zimbabwe, stressed in a statement, "Political or any other differences should be resolved through engagement and dialogue. Human life remains sacrosanct. Killing defenseless civilians for expressing an opinion is the worst a government can do."

A version of this story appeared in the Aug 24-Sept 6, 2018 print issue under the headline: Zimbabwe churches seek to ease tensions after election .

Zimbabwe's church leaders discuss how to respond to military takeover