Arab revolutions and the power of nonviolent action 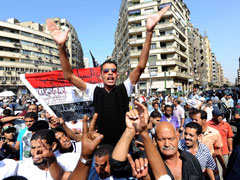 Egyptians protest in Tahrir Square in Cairo Oct. 7, calling on the military to expedite steps to give power to a civilian authority. (Newscom/UPI/Bill Greenblatt)

While sitting in a Cairo café just a couple blocks from Tahrir Square recently, I couldn’t help but notice the television in the corner broadcasting the evening news. Traditionally, TV news in Egypt and other Arab countries has consisted of the president (or king) giving a speech, greeting a foreign visitor, visiting a factory, or engaging in some other official function. This evening, however, the news was about a labor strike in Alexandria, relatives of those killed during the February revolution protesting outside the Interior Ministry, and ongoing developments in the pro-democracy struggles in Yemen and Syria.

Nothing could better illustrate the profound change in the Arab world over the past year: It is no longer simply the leaders who were the newsmakers. It is Arab peoples themselves.

The initial optimism that unarmed civil insurrections, like those that ousted the Tunisian and Egyptian dictators earlier this year, would soon sweep the Arab world in a manner that brought down Eastern Europe’s communist regimes in 1989 has faded. The ongoing repression by the U.S.-backed military junta in Egypt serves as a reminder that overthrowing a dictator is only the first step a transition to democracy. And the NATO-backed armed revolution in Libya and subsequent extrajudicial killings of Muammar al-Qaddafi and his supporters has cast a pall on what had been a largely nonviolent regional phenomenon.

However, there are still reasons to be hopeful that the so-called “Arab Spring” will transform the Middle East for the better.

Major political change takes time. It took nearly a decade between the first strikes in the Gdansk Shipyard and the fall of communism in Poland. Chile’s democratic struggle against the Pinochet regime took three years between the first major protests and the referendum that forced the dictator from power. The 1986 People Power movement that overthrew Ferdinand Marcos in the Philippines was a culmination of several years of popular struggle against the martial law regime. Even reform movements within industrialized democracies can take years of struggle, such as the civil rights movement in the U.S. South.

Indeed, being right and having the majority of the population on your side is not enough. There needs to be long-range strategic planning, a logical sequencing of tactics, and an ability to take advantage of one’s strengths and target the opponent’s weaknesses. In countries where civil society has traditionally been weak and the repressive apparatus of the state is strong, quick victories are rare.

Yet the dramatic events of this past year have served as a reminder of where power ultimately rests: Even if a government has a monopoly of military force and the support of the world’s one remaining superpower, it is still ultimately powerless if the people refuse to recognize its authority. Through general strikes, filling the streets, mass refusal to obey official orders, and other forms of nonviolent resistance, even the most autocratic regime cannot survive.

Freedom House, in its 2005 study “How Freedom Is Won: From Civic Resistance to Durable Democracy,” observed that, of the nearly 70 countries that had made the transition from dictatorship to varying degrees of democracy in the previous 30 years, only a small minority did so through armed struggle from below or reform instigated from above. Hardly any new democracies resulted from foreign invasion. In nearly three-quarters of the transitions, change was rooted in democratic civil-society organizations that employed nonviolent methods.

Similarly, in the recently released book Why Civil Resistance Works: The Strategic Logic of Nonviolent Conflict, authors Erica Chenoweth and Maria Stephan use an expanded database analyzing 323 major insurrections in support of self-determination and democratic rule since 1900. They found that violent resistance was successful only 26 percent of the time, whereas nonviolent campaigns had a 53 percent rate of success.

From the poorest nations of Africa to the relatively affluent countries of Eastern Europe; from communist regimes to right-wing military dictatorships; from across the cultural, geographic and ideological spectrum, democratic and progressive forces have recognized the power of nonviolent action to free them from oppression. This has not come, in most cases, from a moral or spiritual commitment to nonviolence per se, but simply because it works.

There is a long history of nonviolent resistance in the Middle East, from Egypt’s 1919 independence struggle against the British to the 2006 Cedar Revolution in Lebanon that ended years of Syrian domination of that country. Iran has a long history of such uprisings, including the Tobacco Strike of the 1890s, the Constitutional Revolution of 1906, the overthrow of the Shah in 1979, and the aborted Green Revolution of 2009. Palestine has witnessed the general strike of the 1930s, the first intifada in the late 1980s, and more recent campaigns against Israel’s separation wall and settlement expansion in the West Bank. In Sudan, unarmed insurrections ousted military dictatorships in both 1964 and 1985 (though the democratic governments that followed were eventually overthrown in military coups). There has also been an ongoing nonviolent resistance campaign in the nation of Western Sahara against the illegal Moroccan occupation.

The dramatic events of the past year mark a new and exciting escalation of a phenomenon that has been growing throughout the region and across the globe in recent decades. It is a reminder that, for democracy to come to the Arab world, it will not be through armed struggle, foreign intervention or sanctimonious statements from Washington, but from Arab peoples utilizing the power of strategic nonviolent action.

[Stephen Zunes is a professor of politics and coordinator of the Middle Eastern studies program at the University of San Francisco.]

World | Arab revolutions and the power of nonviolent action

Philippine police use traditional Marian festival to win over people