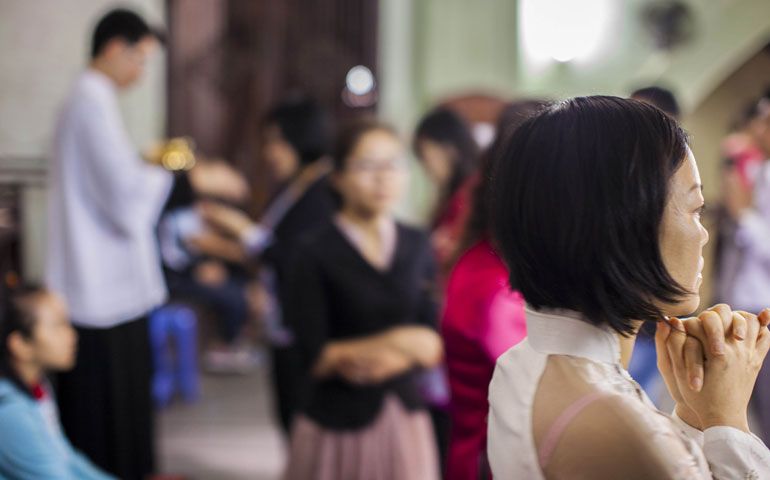 The Asian bishops will make history in December as they meet for the first time in communist-controlled Vietnam. Some 100 prelates are expected to gather for a week of planning 50 miles east of Ho Chi Minh City, an event unimaginable even a few years back.

The Federation of Asian Bishops' Conferences, as part of its gathering, will celebrate 40 years of innovative pastoral ministries among the local churches of Asia.

Unfortunately, for Asian Catholics and the wider universal church, this potentially rich meeting will go unreported. The FABC leadership has decided to lock out the media.

Originally set for Nov. 16-24, the meeting had to be rescheduled after the Vatican announced on Oct. 24 it would hold the consistory in Rome Nov. 23 to create six new cardinals. The FABC gathering had been two years in the planning.

Protocol requires the Asian cardinals and other prominent Asian bishops attend the consistory. One of the newly named cardinals, Archbishop Luis Antonio Tagle, heads the archdiocese of Manila, the Philippines.

Matthew and Luke, who wrote that when lamps get lit they should not be concealed, could not have imagined the shortsightedness of the decision to black out the gathering. The Vatican and other episcopal documents speak about using modern communications to evangelize the world, but when a major opportunity to share the word arises, key bishops find it preferable to work behind closed doors.

Officially, the theme of the FABC gathering is "Responding to the Challenges of Asia: The New Evangelization." Whatever the responses turn out to be, we will be left to read about them on the not well-traveled FABC website. Interviews with the bishops, the development of their thoughts, any give-and-take among them -- the nitty-gritty of episcopal church life itself -- will be absent from the reports. The FABC leadership cites a need for privacy and a fear of bad press as its reasons for closing the meeting down.

Ironically, the FABC's suspicion of and hostility toward a free and open media mirrors that of Hanoi government policymakers. A chance to show the people of Vietnam and the wider world an alternative media value system is being lost.

Instead of inviting the media into the gathering, the FABC leadership has asked three journalists to be recorders of the event, and to upload press releases and documents to the FABC website after completion of the meeting. Explaining the shutout, the executive secretary of the group's Office of Social Communication, Fr. Raymond Ambroise, said the policy was developed after bishops attending a 2004 plenary in South Korea became upset with the reporting. He said bishops "do not feel free to speak openly with journalists present."

FABC sources initially told NCR that the Vietnamese bishops' conference had requested the meeting be closed, but a spokesman for the Vietnamese bishops' conference denied this. One source said Cardinal Pham Minh Man, archbishop of Ho Chi Minh City, had requested the press be kept out. In an email to me he said this was not the case.

Ambroise wrote to me that the federation's secretary general, Cardinal Oswald Gracias of Mumbai, India, and the immediate past secretary general, Archbishop Orlando Quevedo of Cotabato, the Philippines, had affirmed the media policy.

I attended two FABC plenary gatherings, the first in Thailand in 2000, the next in South Korea. At those gatherings the media mixed freely with bishops. When the bishops needed to discuss internal matters they met in executive session, away from the media. It is possible to have privacy when privacy is essential. It is also wise to err on the side of openness, especially when you have nothing to hide and you understand, as church leaders, that you are to be held accountable.

The plenary assemblies in Thailand and South Korea included prelates, priests, theologians, religious and lay leaders, up to 200 delegates in all. Since South Korea the plenaries have gotten smaller and more exclusive, with a core of some 100 bishops making up nearly all of the delegates.

It was in 1970 that Pope Paul VI, as part of a whirlwind global tour, touched down in Manila on Nov. 27. He was greeted enthusiastically by scores of Asian bishops who had little or no experience of each other's work.

In the wake of that meeting, several bishops, recognizing shared challenges, petitioned Rome for a pan-Asian association of bishops. The Curia resisted until the pope overruled its moves. The Federation of Asian Bishops' Conferences had come to life.

Looking back on that Manila experience, Indian theologian Felix Wilfred wrote: "Never before had Asian bishops come together to exchange experiences and to deliberate jointly on common questions and problems facing the continent. The meeting marked the beginning of a new consciousness of the many traditional links that united the various peoples of this region of the globe."

The decades that followed witnessed an explosion of FABC meetings and seminars, an outpouring of documents aimed at defining the bishops' pastoral missions. So confident and proud were the bishops that they began to talk and write about "a new way of being church," a uniquely Asian way. It was a humbler church, sensitive to local culture, religions and the poor with whom they would stay in dialogue. They stressed the primary nature of the local church and called upon their peoples not to be in conflict with other religions, but rather to live out their Christian faith by witnessing to the Gospels.

In 1996, the widely respected missionologist Divine Word Fr. Stephen Bevans wrote that the federation had yielded "an impressive body of documents that are incredibly rich, amazingly visionary, and truly worth careful reading and study."

Those pastorally-minded bishops caught my imagination. I began reporting their work. Eventually, in 2004 I published a book, Pentecost in Asia: A New Way of Being Church, the history of the federation until that time.

My first FABC plenary gathering was in Samphran, Thailand. The meeting was largely informal, over 10 days, with an open mix of speeches and workshops and document-writing during daylight hours, and drinks and cultural events in the evenings. Lay men and women, clergy, prelates and theologians all associated freely. It was truly a celebration of the people of God. Never had I experienced such freedom and openness in an episcopal-sponsored meeting.

As I watched the Asian bishops up close, almost none wore the clerical clothes they drape themselves in when visiting Rome. They had integrity, modeling the pastoral church of which they wrote.

These prelates were men who had grown up in societies in which Catholics represented only a sliver of the population. They were humble. At the same time they proclaimed Asian pride. Meanwhile, they were sensitive to the fact other religions had come to Asia millennia before the birth of Jesus. They lived among and could celebrate varied Asian spiritualities while being at home in their Catholic faith.

What a gift these leaders have been to the church. But it seems a new generation of FABC episcopal leaders, more timid and less trusting of the world around them, has taken hold of the organization.

I pray now that this new timidity is no more than a temporary setback for this generally forward-looking organization. I pray the Asian bishops do not lose their courage or their belief they have something important to offer the wider church. I pray they continue to craft a model of church that draws on early FABC visionaries.

I suspect my prayers will be answered. Asia's destiny -- and the church's destiny in Asia -- will continue to grow out of Asia's rich heritages, even in these times of unprecedented globalization. The local churches of the continent, led by its bishops, have much to offer the wider global church.

[Tom Fox is NCR publisher. His email address is tfox@ncronline.org.]

The Religious Freedom Restoration Act is discriminatory: let's fix it

Francis to refugees: 'The church is with you'